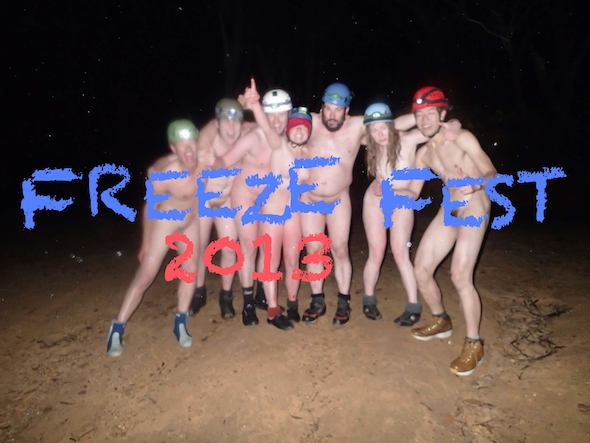 After weeks of anticipation, and the weather reports in the days leading up to Freezefest predicting snow, winds and subzero temperatures, the four canyons attempted during the first day of Freezefest had been . . . well . . . not really that cold. Whilst not all that disappointing, the distinct lack of hypothermia, frostbite, or any real discomfort had been kind of an anti-climax.

Comments ranged from “it’s really not that cold, is it?” to “why don’t we always canyon in winter?” The canyons so far had made for a lovely day, but that’s not really the point of FreezeFest now is it?

However, the setting of the sun on the Saturday evening brought about the change that had been predicted. The winds picked up, the temperatures dropped markedly, and everyone was huddled about the fire as darkness fell.

The last group to reach the campsite were those who’d done River Caves late in the afternoon. They moseyed on back at around 5:30pm and it was at that point talk of the night canyon started again in earnest.

Figure 1 — the bravest of FreezeFesters celebrate their survival!

What had seemed quite doable, and even, dare I say it, ‘fun’, in the daytime, seemed like utter lunacy in the current conditions. Even walking a few steps away from the fire was wildly unpleasant, despite the four layers of clothing.

Add to that the fatigue of a day spent canyoning and the excesses of the night before, and a naked trip through a wet canyon seemed about as much fun as joining the dirt bike riders at the next campsite for a talk about asylum seekers (not including T2 who would probably enjoy that).

Over the next half an hour, numbers for the trip fluctuated like the flames of the fire in front of us, which would be oh so far away if we were to go on this crazy venture.

Eventually a group had formed, with the last minute additions of Em and I (T3), who’d managed to psyche ourselves into the idea in the last few moments, and sans the mastermind of the expedition, T2, who decided to ‘Bjorn’ on the trip and stay in his sleeping bag. The final members of our star studded crew were: Helen, Mike, Ian, Tom (T3), Em, Fritz and Joshua.

The drive down, at least in my car, was a nervous affair, with lots of chatter about hypothermia, frostbite (particularly on hanging appendages), and what would happen if someone injured themselves.

Once at the carpark, my weak suggestion of wearing our clothes to the constriction, and putting them straight back on once out of the water, was met with utter contempt from the rest of the group. “We do it naked, car to car,” thundered Fritz, and I shrunk back into myself as my penis soon would in the freezing conditions.

Clothes were soon discarded and as we waited for the final people, our naked brigade ran a pink and jiggly circuit around the carpark.

Once the last person was ready, our circle of runners peeled off and headed at a spritely pace down the track to the canyon.

Lots of shouts, howls, and screams punctuated our merry sojourn, naked through the cold winds of the Newnes Plateau. It reminded me of the kind of giddy excitement you get trying to go to sleep at school camp.

The relatively warm jog down to the start of the canyon was disappointingly short. We stopped for a moment to check everyone was there and ready, and then with a whoop and a yell we were all splashing into the icy waters.

It was . . . by far . . . the coldest I’ve ever felt. The second your body hit the water, a burning, shock sensation engulfed you. If your head went under, it was an instant brain freeze, with none of the solace of icecream that you’d normally have.

I’d like to take this moment to mention a certain member of the group, who goes by the name of Ian. Up until that fateful Saturday, Ian, a Chinese exchange student, had never canyoned before. While most people in his position would be getting lost on the walk from Echo Point to the Three Sisters, Ian was naked canyoning with us. Not only did the poor bastard lose his glasses on the first rock jump, he had decidedly less of the strategic insulating layer (fat) of those of us like Joshua and I.

Nevertheless, Ian had a smile on his face the whole time, was wolf howling with the best of us, and was one of the first ones finished (wooden spoon being a tie between Joshua and I). Ian, if you’re reading this, you’re my hero.

The pace was quick, and the time spent in the pools even quicker. The rock slides were a little coarse on the derriere, and nut slap was a constant risk on the rock jumps.

Towards the end of the constriction the cold was definitely starting to get to everyone. Em later described strange thoughts and a bit of confusion, Mike and I had experiences of fear when fully submerged, and I think everyone was getting a little clumsy. If the wet part of the canyon had been much longer, I think things would have got unpleasant and maybe a little more dangerous. But it wasn’t longer, and was a great success.

At long last we hit the climb-down rope that signalled the end of the canyon. With cold club-like hands and the occasional shiver, this was a little trickier than normal.

Ian had a particularly hard time, considering he couldn’t see where his feet were going as he’d lost his glasses. I think he liked it that way. He’s that kind of guy.

As we waited to one-by-one descend the rope, the icing (pardon the pun) on the cake was applied: it started fricken snowing!

Yep, you read that correctly, it snowed. Standing there at the end of canyon, lewd dancing to stay warm as the last people descended the rope, as the snow swirled about us, was up there with the happier moments I’ve had outdoors.

The hike out was uneventful apart from the growing exposure as we climbed out of the valley and into the face of the winds.

Before we got dressed we had a quick photo (Figure 1, above), and all congratulated ourselves on a job well done.

We’d been naked and hiking for around 70 minutes, with around 20 minutes in the canyon proper. While I don’t want to detract from any of the other activities on the weekend, it is my humble opinion that the naked night trip through Twister Canyon put the ‘freeze’ in FreezeFest and should be a permanent feature in the future.