We all enjoyed a quick trip along the magnificent coastline of the Royal National Park. Highlights included swimming in the freshwater creek near eagle rock and gazing in awe at the power and beauty of the waves smashing into the shoreline. Cya James 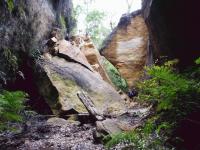 A week of remote canyoning in the Coorongooba Labyrinth

But head up north, into the Wollemi, and there are even more spectacular slot canyons in a remote and rugged wilderness area where the fittest, keenest and most experienced canyoners are still making new discoveries and carrying out first descents.

On Sunday morning we all left the city on the L90 bus to Palm Beach. It was showering in Sydney, but a quick text to Bruce on the Central Coast confirmed reasonable weather and to continue with the walk. It turned out to be a beautiful warm day!

Often when you go bushwalking in amazing places, you’ll want to take photos that truly capture the beauty of the scenery. That’s where the idea of a photography walk came from. To bring together people who share an interest in bushwalking and/or photography. And to help people take better photos of their experiences in the bush.

We had one non-swimer-PFD member with us, so Lower Gambie was enough challenge for Saturday. We did WDWDIITR on Sunday, it rained on us mostly the whole weekend. Pretty chilly even with 3mm wet-suits and 1mm steamer. I took 2 of my friends to their first canyoning experience. We spent… 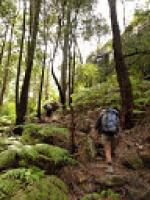 Despite the short notice and the fairly miserable forecast, two more intrepid girls decided to join the walk. It was 9am when Lisa, Lilian and I met up at Rosemead park to start the first long part of the walk, from Hornsby to ridgetop campsite near Berowra. Knowing that 22km would have kept us busy for a few hours, we didn’t waste a minute and set off for the fishpond where we joined the Great North Walk track. It is a beautiful track and we really enjoyed every single bit of it, even the steep ups&downs! Along the way we could admire plenty of wildlife: water dragons, goannas, cockatoos, bush turkeys, and even a chook (who knows where it came from!)

A very easy bushwalk to Paradise

G’day folks, Thanks again to those who came along on this easy walk on Thursday. I had a great time. I’ve put together a short trip report, a few photos and a video of some of the spectacular water jumps into the amazing waterhole we walked to. http://fatcanyoners.org/2012/01/12/paradise-found/

It was supposed to be a trip with six people but late the night before, one girl had to drop out because she injured herself during the attempt to climb a wall. So once again, it is not the canyoning that is getting us injured. So early on the Sunday morning, we all pulled over at our usual meeting point in North Richmond – all of us except Barnaby who was still missing. After trying to call him unsuccessfully and waiting for about twenty minutes, we decided we had to move on, discussing how much we hate it when people simply don’t turn up, especially in the light that I had to turn down several people due to numbers. Sorry to all those. We took two cars and headed up to Mt Wilson. 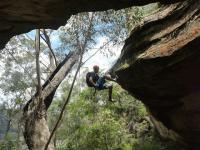 Nightmare Canyon was new to all of us, and proved to be a lot of fun, while Devils Pinch seems to grow more spectacular with each visit. Hopefully the natural beauty made up for some of my drunken rambling! Trip report and pics here: http://fatcanyoners.org/2011/12/31/nightmare-and-devils-pinch/