The battle plan for this trip went something along the lines of: casual stroll along part of the great north walk, followed by a few beers, some dinner… In reality, the stroll turned into an epic 30km mission, enough to force any fresher to question the fundamental basic operating principles of subw. 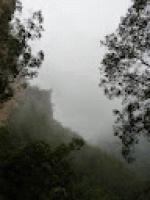 Ulla, Lisa and myself set off from Evan’s lookout in a misty afternoon – the only thing you could see was a white wall – Lisa and I almost managed to convince Ulla that underneath the fog there were the 3 sisters.

Often they aren’t precise, in fact many aren’t designed to be, rather they are a simple way of giving just enough rough information to someone who knows how to use it to let them find a secret spot. They leave a little room for exploration, for navigation, for bushcraft.