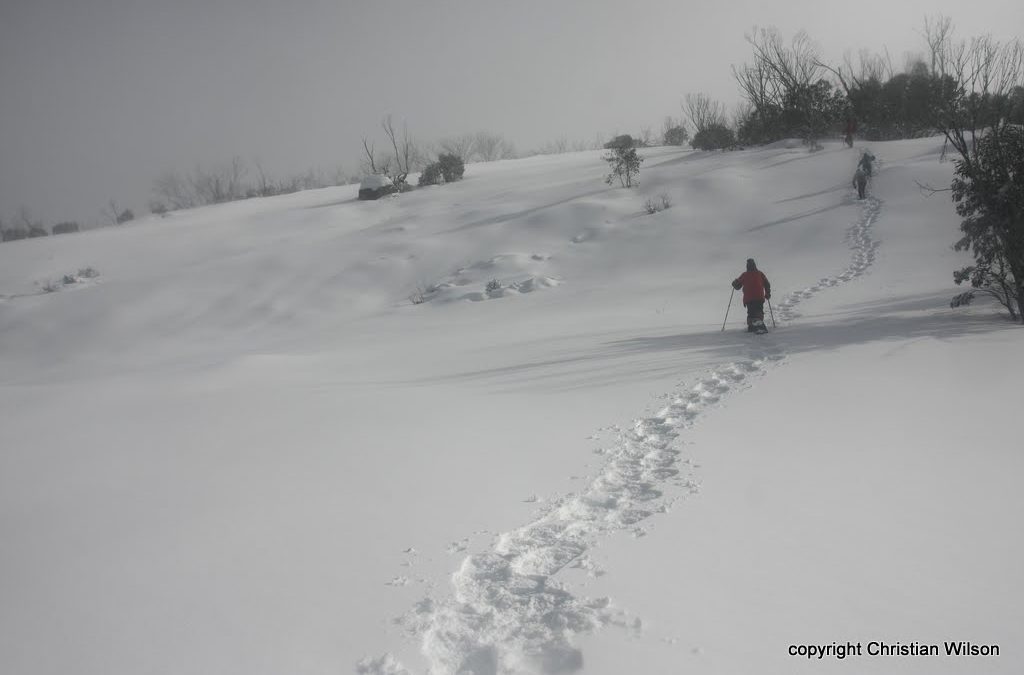 This trip was originally planned as an early winter climb to the summit of Mt Gungartan, 2068m in the Snowy Mountains. However, other commitments meant that the walk was now pushed further into winter, and so the prospect of more snow and harsher conditions was likely. And, as luck would have it, a series of strong cold fronts in the forecast meant that things were always going to be unpredictable up there. Of course, that can be part of the fun, as long as you go well prepared. I’m pleased to say that everyone took the required gear list seriously, and everyone came well equipped for our walk into a wintery wilderness. After battling the Friday traffic, and with the daunting prediction for storm force winds and possible blizzards, our party of 5 made the long road trip down to the Snowy Mountains, stopping for refreshments at Marulan, then onto Cooma where we collected our snowshoes. Although not included in my original plans, the snow conditions meant that it would be near impossible to do the walk without them. They proved to be indispensible, and easy to use. We have since discovered some designs are better than others , but more on that later!

We started the weekend with a walk from Winmalee, up Blue Gum Swamp to Grose Mountain Lookout. Along the way we met a man who had walked with SUBW many years ago with many stories of club trips to share. He joined us to the top of Grose Mountain where we had lunch.

On Saturday morning we met in the Blackheath car park, and after coffee and snacks we set off for the Wolgan Road. Just past the Angus Place Colliery, we turned off and headed up the fire trail that climbs onto the divide. Just before the steep descent to Baal Bone Gap, we parked the cars and shouldered our packs. It was not too far to Baal Bone gap where we could fill up our water containers at the pressure reducing station. We were not the only ones there – a large part of 4WD’ers had turned up.

Donkey Mountain is about as close as I can imagine to what bushwalker heaven might be like. An amazing island of rock, soaring out of the valley, ringed by towering cliffs, dotted with distinctive pagodas, the rock fractured by countless cracks, canyons and caves all waiting to be explored.