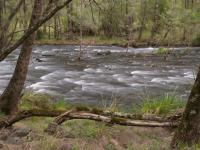 We started out on Saturday morning from Kanangra Walls in thick mist. The mist continued along Gingra Range and we eventually dropped below it as we descended to the Kowmung River via Roots Ridge. We arrived at the river around 11am and after a bit of photo-pfaffing we climbed up to Mt Fell on Scotts Main Range for lunch. Our plan was to head towards Lacy’s Tableland and then Bimlow Tableland. So we continued north along Scotts Main and then descended through some scrub to Butchers Creek.

A decision was made then to wait it out at least until the next Sydney- bound train came in half an hour, and if the rain had not let up, to abandon the walk and go to Brooklyn for a coffe and morning tea before returning to Sydney.

The remaining 9 walkers, then crossed the Gladesville Bridge and followed me as I proceded to walk up Victoria Rd. Quick thinking from Anne saved the day, as she announced we were going the wrong way. Verification with the GPS concluded that yes we were heading direct to Parramatta rather then Lane Cove as desired. With a short back track we then found our next bridge- Tarban Creek Bridge.

It was a dark and gloomy night; the clouds were covering the fast approaching full moon, creating a rather mysterious atmosphere. On this particular night, eight snow ninja’s decided to go to the snow for a weekend of skiing, since the end of the ski season was nearing. 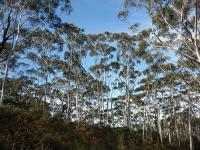 Wilf Hilder memorial: plus a detour down Walls Pass

G’day all, Mitch, T1 and myself attended the memorial service for legendary bushwalker Wilf Hilder on Sunday (if you’ve ever climbed Walls Pass, walked on the route through the catchment between Mittagong and Katoomba, or done tracks like Lindeman Pass or Bruce’s Walk, you have Wilf largely to thank for it!) T1 and I also did some exploration of camp caves on Narrowneck, before doing a fairly epic tribute detour down Walls Pass and across Cedar Creek.