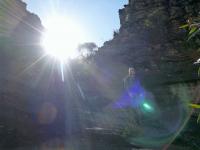 A chilly trip through Dalpura Canyon

It was just three days before winter. As I jumped into my car to set off up the mountains I looked at the weather station at Mt Boyce — pretty much the same altitude as where we were heading. It was reporting a chilly two degrees, with a wind chill that would make it feel even colder.

We set out on Saturday morning from the Golden Stairs carpark on Narrow Neck. On the way down the stairs, we were met by many runners coming in the opposite direction – running up the stairs (well to be truthful, few were actually running). They were on a 100 km fun run. We were to see them again later. Once down on the main track to the Ruined Castle, we left the runners behind. Quiet was regained. But only temporarily, there began a chorus of bird calls. Craig, a keen bird spotter pulled out his binoculars to see as well as hear.

A nude bushwalk in the Blue Mountains

A few people from the club had been suggesting that I should actually run a nude trip, rather than just surprising people with some impromptu nakedness when the conditions were right, so with a free day coming up and the promise of a sunny outlook ahead this trip was born. 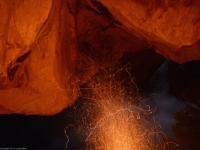 That idea isn’t surprising — this stunning upper gorge is what gave birth to the conservation movement in Australia and lead to the eventual formation of the Blue Mountains National Park after all — but how many people stop and ponder what is in the other two thirds of this river’s course.