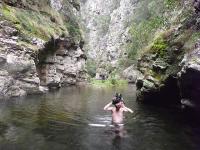 I’d been itching for an overnight trip for a while, and a conversation with Rocky got me thinking about the Wild Dogs, so I decided to organise a trip to check out a few of the places on Dunphy’s sketch map that had intrigued me.

We all met up at Wondabyne Station at about 10am and immediately set off up the steep track to the top of the ridge to the start of the fire trail. Skies looked a bit unfriendly but the rain held off. We then proceeded to the junction of the fire trail at the sidetrack to Myron Brook and Kariong Brook. There were many wildflowers in bloom including Banksias containing sweet nectar, which we sampled from a couple of flowers.

On Saturday, the 28th of May, three awesome people- Scott Mcoy, Martin Londe and Chantal Bronkhorst- awoke at 6am to complete the most epic challenge of all epic challenges. The challenge was to abseil down Boars head and Malatia point without a rope. Were they successful? Yes, they were! (Note: When looking at the video of this trip, you will notice that there is a rope, BUT that is because rope was edited in afterwards. In addition, any references made to ropes in this trip report should not be commented on by anyone since I cannot think of a valid excuse as to why ropes are mentioned. If you comment on this your memory will be erased, so it is advised not to point it out.)

When an old friend of mine [a keen canyoner and cyclist] ran the Murray to the Mountains Rail Trail for the NPA in autumn 2010, in classic disorganised form I belatedly posted the trip to SUBW – in an attempt to bring some youth to the group. Alas, that failed – just too late and too far away, I guess. But a new year, another NPA trip, another chance! All I had to do was post it a little earlier… 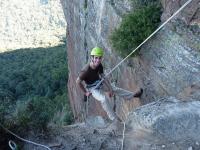 After leaving Sydney during some misty weather, this turned out to be a beautiful day up in the Blue Mountains. The original plan was to do two abseiling trips down Malaita Point and Wall, but we decided to replace Malaita Point with Boars Head Rock trip and do Malaita Wall in the morning.

After weeks if not months of bad weather we got a sunny mild Sunday that had us in high, if somewhat nervous spirits as we headed down the track at 9:30am to ‘the base jumpers 200m overhang’ at Pierces Pass (one ridge east of Rigby Hill).

After meeting up at Strathfield Station, we headed off to Katoomba Station to await the arrival of the train with more walkers aboard. We got there 10 minutes ahead of the train which time was put to good use as a loo break. When all had been gathered at the Station, I gave directions to the car drivers how to get to Scenic World and Violet Street where we would all park before setting out for the walk together. Four of the five cars duly arrived at the parking spot and our passengers gathered to await the arrival of the fifth car, Robert’s. And waited. And waited. After about 20 minutes a call came from Trang, one of the passengers in Robert’s car, asking where we were! She said that Robert had gone straight to the top of Furber’s Steps instead of Violet Street, and there they had sat waiting for us wondering where we were! I then led the group around to the top of Furber’s Steps, and down we went into the valley. On the way there were great views of the Three Sisters, Jamieson Valley,and Katoomba Falls at full flow after the recent rains, and a photostop was arranged at a lookout; there were several in our group for whom this visit to the Blue Mountains was their very first ever, and they found the view awesome.