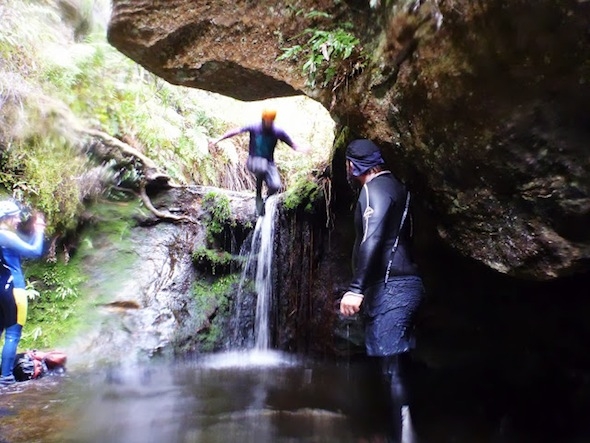 The Twister and Rocky Creek double was what had convinced me to do this year’s FreezeFest on the Newnes Plateau.

Rocky Creek is notoriously chilly, even in summer, so it promised to offer a real temperature challenge. But on the plus side, there’s only jumps and slides in the two canyons, and no abseiling meant we could take a larger group and not be stuck shivering at the top of each drop. 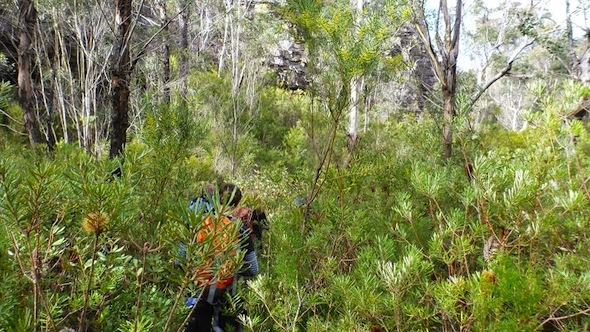 It was only a short drive from our base camp at Barcoo Swamp, made even nicer by the blue skies and sunshine that combined with a mass of early flowering wattle to give a stunning display.

At the carpark, which we’d expected to have to ourselves, a Forester was already parked. A peek inside revealed ropes, helmets, harnesses and other canyoning goodies. Were they fellow FreezeFesters, or just some other maddies who’d picked the same weekend?

We poured down the short track towards Twister Canyon — which actually felt a little scrubbier than usual — before regathering just before the canyon starts. 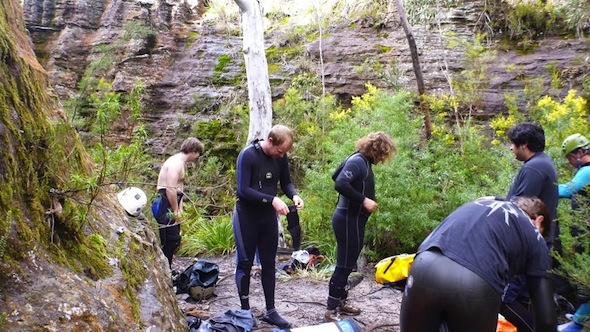 Gearing up before hitting the icy water (photo Shaun Nielsen)

Wetsuits were pulled on, thermals and even waterproof tops were added by some, dry clothes were carefully stashed in packs, and some final mental readying was done. Then we were off and into the icy water.

While the weather wasn’t too bad, the water was cold. Bloody cold. Our hands in particular felt it. The choice of a spring suit, and my failure to wear neoprene socks, were immediately regretted.

Twister isn’t a particularly deep canyon, but it is amazingly fun. A series of slides, wades and scrambles slowly built up in length. Fritz insisted on some face-first water-sliding, and was followed by other braver souls.

Lower down Mike found a small hole to contort his body through, while the rest of us took leaps of faith into the deep pools.

The feeling of the freezing water engulfing our heads brought an immediate sting, and encouraged rapid egress from the water. 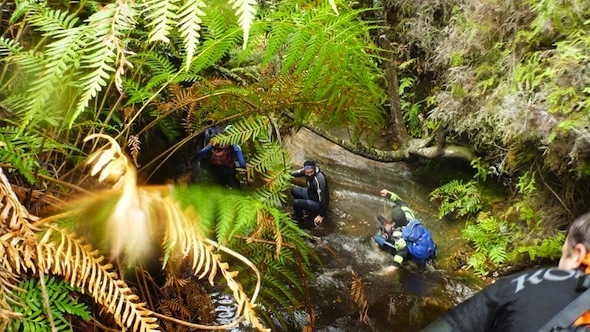 All to soon Twister was done, with the final fixed hand-line taking us down the last drop.

From here we were back in the winter sunshine, although it was less warming now that we were soaking wet. We raced along the track, down into the fern-filled valley, heading towards the high point of the trip. Rocky Creek.

Drew, being at the skinnier end of the spectrum, was really feeling the cold by now, and wisely decided to pike on the longer, colder section. He headed back to the cars and left the rest of us to press on.

The only time we slowed was to wait for everyone to make it down the tree root climb. Oh, and when we spotted the words “Freeze Fest” freshly scrawled in some sand. I guess that answered our question about the other car at the start! Back at camp we met Sam and Rick, the producers of the message.

Moments later we were at the start of the canyon, where a surprisingly healthy flow was pounding down the waterfall. One by one we climbed through a pothole and into the impressive constriction of Rocky Creek.

The narrow upper section had people trying all manner of moves to bridge, scramble and ledge their way above the water. Each manoeuvre ended with an inevitable swim, but it didn’t diminish the efforts.

Some stayed out of the infamous “washing machine”, while others simply allowed themselves to be swept through the flow and out the other side. 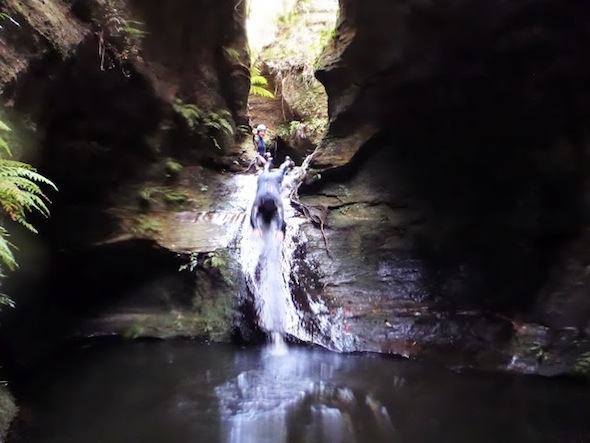 According to Fritz, this water slide should be done head first!

Finally a swim marked the end of this narrow upper constriction, and a brief respite in the sun.

Everyone enjoyed the nice water slide down into the next part of the constriction. This part of the canyon — which is wider and more spectacular — seemed to include a further temperature drop.

This section never ceases to amaze me, with incredible swirling canyon formation closing in overhead, and only the narrowest of gaps allowing light to enter. The darkness that makes it a challenge to photograph also added to the psychological sense of coldness. 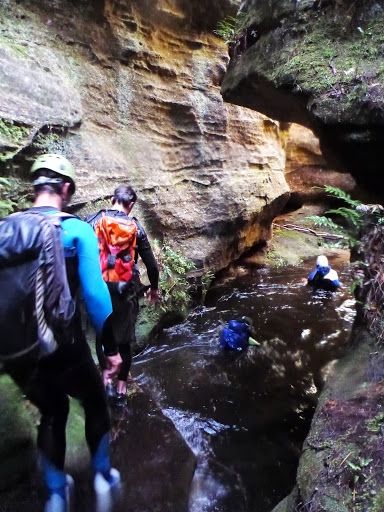 There were also more swims, and longer swims, than I remembered. I guess the cold does make them more memorable. Although not everyone seemed to be affected. Several people were pausing for photos, while Joshua hung back at the rear and broke into a deep, resonant operatic tune.

It was this part that really confirmed my lesson for next year. Buy some neoprene socks and gloves! Oh, and probably dump the spring suit for a steamer.

In summer we’d normally reverse the canyon, which is quite simple, but in the cold no one was keen on that idea. Instead we used the ‘climbing exit’ which I hadn’t done before. It’s technically extremely easy, no more than a scramble, although the exposure as you climb above the canyon slot is a little nerve wracking. And the frozen hands added to the challenge!

A final skirt of the cliffs, a hand-line up a slab, and a scrubby push to the top of the ridge had the group reunited atop a rocky pagoda, basking in sunshine.

We stripped off the wet clothes, joyfully pulled on the dry gear in our packs, and allowed ourselves to warm up. 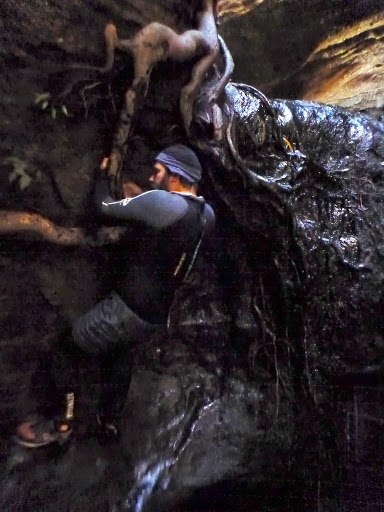 Joshua down-climbing on some tree roots

The simple, but rather overgrown exit track got everyone back to regular operating temperature. That said, a couple folks who’d chosen to go barefoot regretted their decision a little, with plenty of rough rock and prickly scrub roughing up their already numb feet.

Soon enough we were all back at the cars, and reunited with Drew. Well, almost all of us. Tom had decided to take a little detour up the ridge, so a couple “cooees” were needed to guide him back to civilisation. 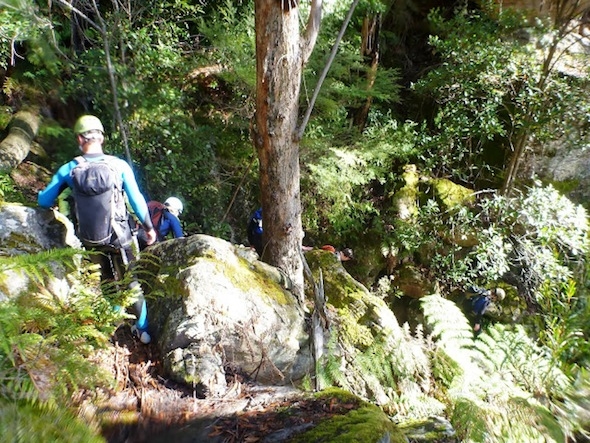 Heading down the valley towards Rocky Creek 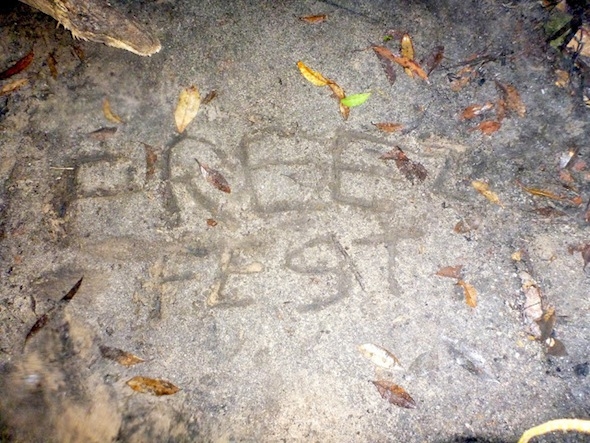 A message from fellow FreezeFesters Rick and Sam! 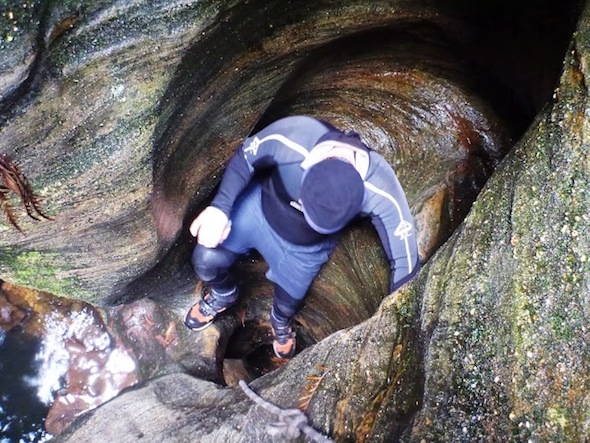 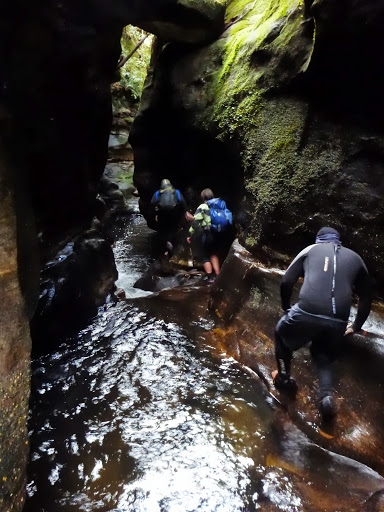 Skirting along a narrow ledge 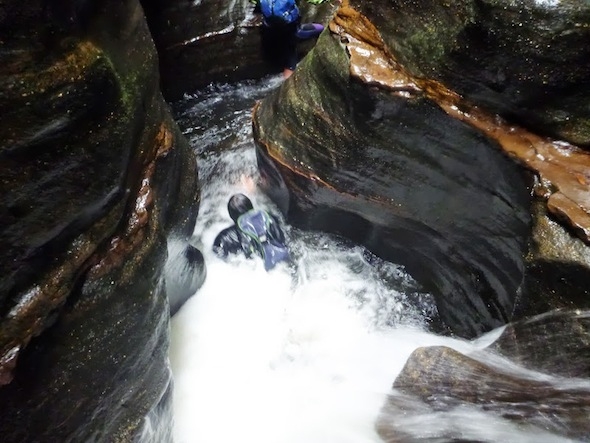 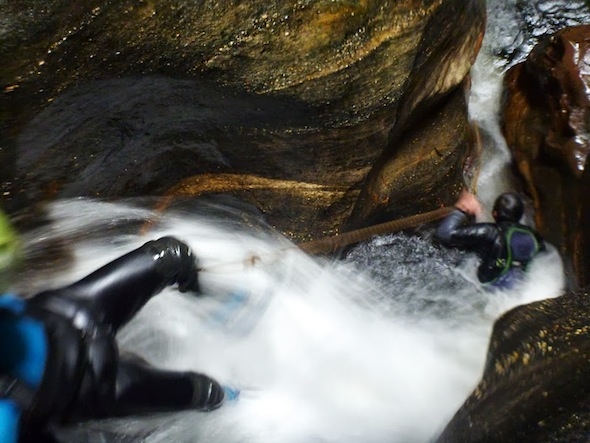 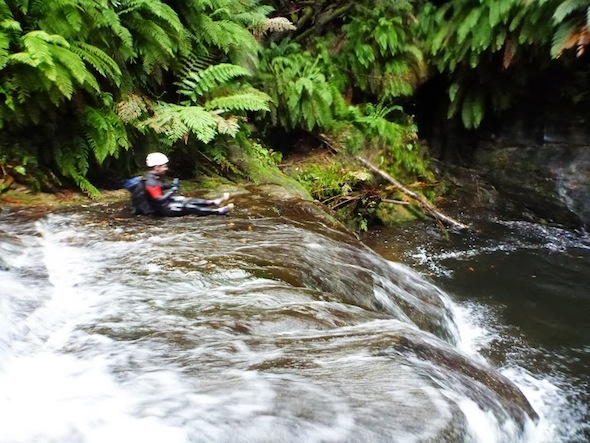 Water slide between the constrictions in Rocky Creek 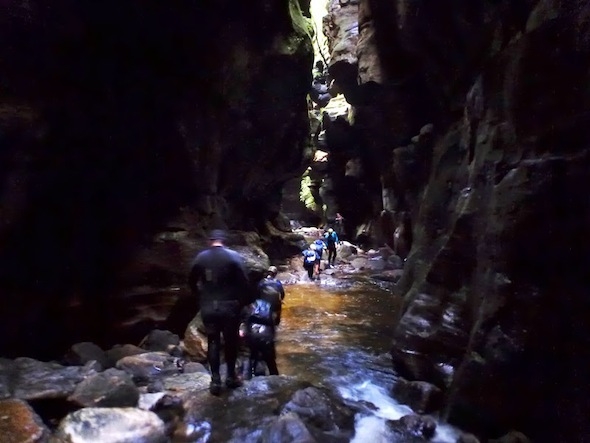 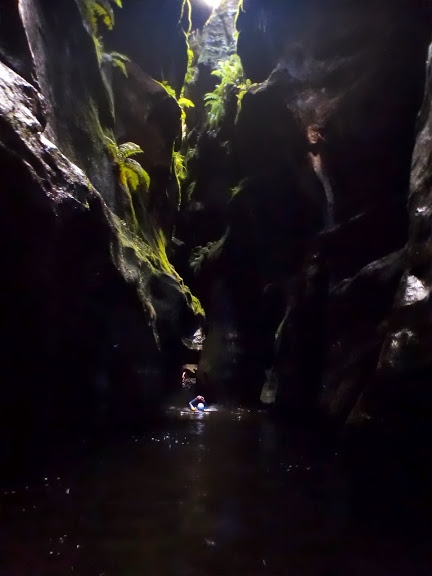 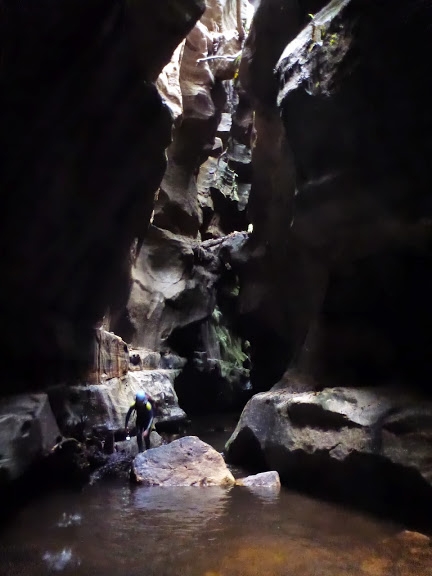 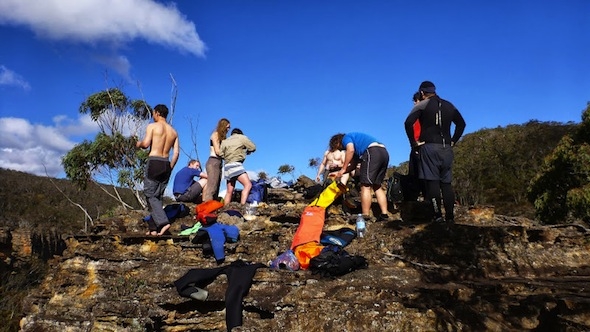 Basking in the sunshine at the end (photo Shaun Nielsen) 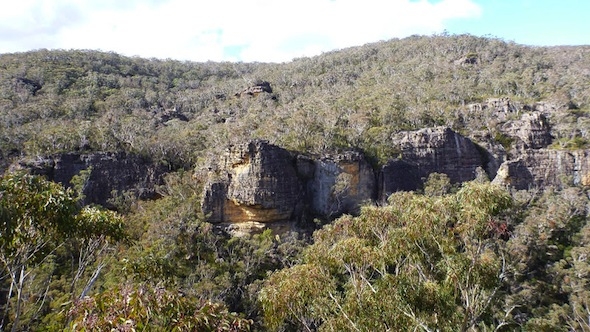