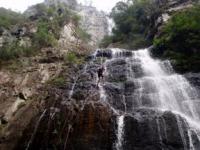 Since Nicole is changing jobs and had the last 3 days off work, we decided to head out to Kanangra for some end-of-season canyons. I have never been out that way before, and Nicole had only done Kalang and Dione Dell, So we were a little bit scared at the thought of Kanangra main. The news that thee were fires burning not far from murdering gully didnt help either, so it was with more than a little trepidation that we headed out to the walls on tuesday night. We arrived at the walls 9:30 Tuesday night, and decided to head out to the lookout to check on the aforementioned fires. The smell of smoke was heavy in the air, and upon arriving at the lookout we were greeted with a fiery glow from the valley below. Fortunately, the fires had retreated several ridges back from murdering gully, so we headed back to the uni rover trail to camp, stopping to search behind the shelter for Robs pants and headtorch he had left behind on the weekend (they were sitting next to the water tank).

After meeting the party form the 9.50am train we immediately set off up the hill to the ridge above Wondabyne Station and then set off along the fire trail towards the track junction to Myron Brook. At this point I reminded whoever may be in front to look out for snakes, and that if we were lucky we might see a python.

First and foremost a big thank you to Lois who organised the trip, taking and answering emails from more than 20 people, organising, reorganising and deorganising cars and who was in them, who needed what gear and so on, right up until the last minute. In the end and after having done all that, Lois couldn’t join us on the trip due to a subluxed 5th metatarsal (whatever that is – something to do with foot bones).

Catching the 9.18am train from Central, we arrived at Wentworth Falls station shortly after 11 and set off walking down the Charles Darwin track. The weather was sunny and pleasant for walking, there was ample time to appreciate the views before descending down the falls along the National Pass.