A quick trip through River Caves 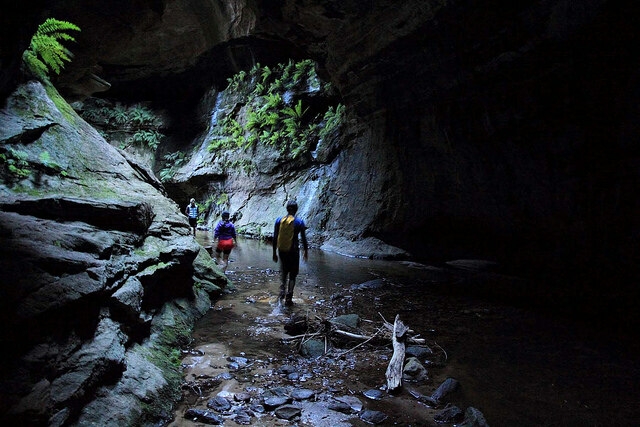 We’d arrived back into camp early in the afternoon, after completing Twister and Rocky Creek Canyons. They hadn’t been anywhere near as cold or unpleasant as everyone was expecting, so there was plenty of enthusiasm for another canyon.

Fritz suggested River Caves, which was new to quite a few of us, so we all agreed on that one. We did lose a few to the warmth of the fire after a late lunch, but still had a decent crew of about ten.

Rather than a hellish hike out or a seemingly non-existant entry track, the drive to the trailhead proved to be the most challenging part of the canyon. Heavily rutted out, with big muddy pools punctuating the already rough dirt track, Albert’s little car struggled on the way in.

For at least three of the pools everyone had to jump out of the car to lighten the load, while Albert put his mongrel into gear and careened up the side, around and straight through the pools.

At long last we made it, the cars filthy from the trip, and set off at a cracking pace to do the canyon before nightfall.

The track in was nice and pretty, with some good views over the small valley, and some nice rock formations.

Soon enough we were down at a river, which Fritz assured us was only minutes away from the constriction. It was hard to believe from the look of things that any decent canyon was ‘minutes away’, but we trudged on in and sure enough, there it was.

It’s surprising River Caves isn’t more famous. It is a really really nice canyon. Although fairly short (hike in twenty minutes, canyon around forty-five minutes, then back the way you came), it’s fun going, with lots of scrambles and small climbs, and nothing more than your feet and shins getting wet. 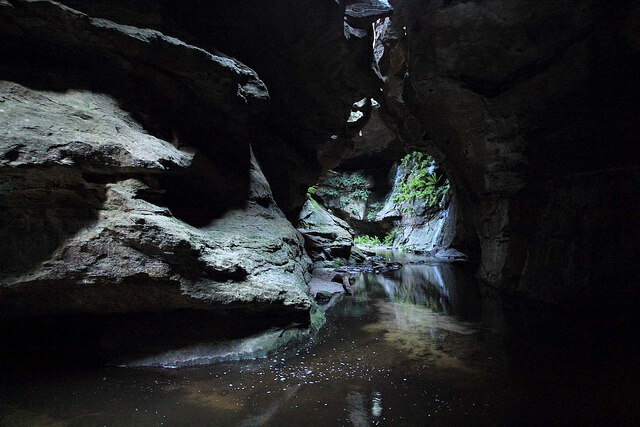 The canyon is a wide tunnel with a narrow, winding slot high above (photo Albert Chetcuti)

What really struck me about the canyon was its beauty. A wide sandy stream-bed strewn with beautiful sandstone rocks, sits below a high, narrow constriction, and is full of ferns.

The highlight of my FreezeFest was definitely the moment when a warm gust of wind hit the canyon at just the right angle that it flowed through. The ferns shimmered and the water ripppled, as we all gazed up into the curly recesses of the constriction above.

We made good time through the canyon, and were rewarded at the end with a sixpack of White Rabbit dark ales, fittingly carried in and distributed by SUBW beer officer Fritz. 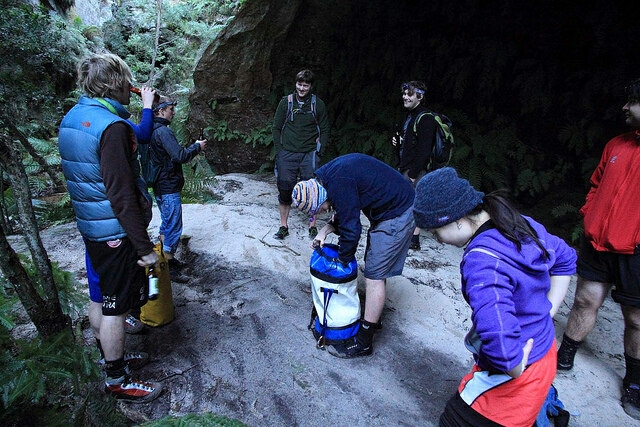 We hung out for a while for a chat, a beer, and to wait to see if any glow worms appeared for us.

Unfortunately the glow worms remained elusive, but it was really nice hanging out, having a beer, and enjoying a surprisingly spectacular canyon.

The hike out was much the same as the hike in, and we reached the cars just as the sun was going down. Jolly good stuff.