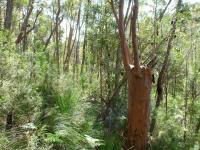 I love bushwalking sketch maps. They come from a time before GPS and mobile phone when information was passed from person to person, and recorded in a much more human manner.

Often they aren’t precise, in fact many aren’t designed to be, rather they are a simple way of giving just enough rough information to someone who knows how to use it to let them find a secret spot. They leave a little room for exploration, for navigation, for bushcraft.

So when I spotted a couple waterholes on a bushwalking sketch map of the lower mountains I thought it would be a perfect half-day walk, along the lines of my trip to Paradise in January.

The weather didn’t look promising in the morning, with a thick carpet of grey clouds covering the mountains and a forecast of showers. Despite this seven of us still met up at Faulconbridge Station just before 9am, ready to set off.

We almost lost Anne-Françoise when we started walking, not realising she was still at the station, but eventually we were all together and we made good time through the suburban streets to our starting point.

The walk began along an old track, built sixty or more years ago, down to what was once a popular local swimming hole called Peggy’s Pool.

Despite it being a track, complete with carved stone steps, it took us a minute to find the overgrown start of it. Once on it we raced down into the valley, past the stands of rare Faulconbridge Mallee trees.

Soon we were at Peggy’s Pool, which unfortunately looks quite sad these days. Years of urban run-off have silted it up, although it still has a pleasant little waterfall. There were also a few weeds nearby, again the result of careless local gardeners!

Just downstream we found some Aboriginal sharpening groves. It seemed like it would once have been a very pleasant spot to pause to sharpen your tools.

Just across a small pool a Sulphur-Crested Cockatoo was playing in a low shrub, giving us a chance to get quite close and admire his plumage.

From here we followed a faint foot-pad down the creek, crossing over a couple times as we went. The creek didn’t look too much at first, but soon opened up into an impressive wide valley, with towering trees overhead and a sea of ferns below.

While the trees looked a little like Blue Gums, I’m told they are Deanes Gums, which seem to grow to similar impressive heights. The valley was so wide and fertile here it looked like a wonderful place to return and spend a night.

Soon the valley began to close in again, and the creek began to drop down to our right where we could hear a small waterfall. We followed above the small cliffs, heading around to a small side creek where we could scramble down into gully and back-track to the base of the waterfall.

We stopped at this pleasant spot for an early lunch, enjoying a shower under the waterfall, a wade in the small waterhole and even had a few goes on the little water-slide, even if it was a tad bumpy.

By this time the sky was bright blue, and we had a patch of sunshine streaming down on us. What a great reward for refusing to be put off by a bad weather forecast!

Eventually we packed up and set off. The plan was to follow the creek down to the next major junction, then follow an old fire trail back along the ridge to suburbia. Unfortunately the scrub had other ideas, and it soon became clear that this was going to be a slow, painful route.

Instead we decided to simply push up the side of the ridge, which still meant some scrub, but soon enough it began to ease, especially after we scrambled up two very small cliffs.

Everyone was relieved when we hit the fire trail, and we made great time as we raced back towards the station. We ended up making it almost an hour early — just minutes before a train was due — so we all parted ways.

Another great half-day walk in the lower mountains. Proof once again that you don’t need to walk far to escape civilisation and discover your own secret little spots most people will never know exist.