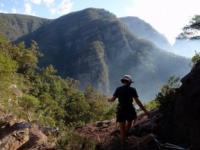 Since Nicole is changing jobs and had the last 3 days off work, we decided to head out to Kanangra for some end-of-season canyons. I have never been out that way before, and Nicole had only done Kalang and Dione Dell, So we were a little bit scared at the thought of Kanangra main. The news that thee were fires burning not far from murdering gully didnt help either, so it was with more than a little trepidation that we headed out to the walls on tuesday night. We arrived at the walls 9:30 Tuesday night, and decided to head out to the lookout to check on the aforementioned fires. The smell of smoke was heavy in the air, and upon arriving at the lookout we were greeted with a fiery glow from the valley below. Fortunately, the fires had retreated several ridges back from murdering gully, so we headed back to the uni rover trail to camp, stopping to search behind the shelter for Robs pants and headtorch he had left behind on the weekend (they were sitting next to the water tank).

Wednesday we did Kalang falls, and it went as smoothly as anyone could ask. A spectacular trip, with many excellent abseils. I will let the photos speak for themselves. The weather was fine and sunny. even if the photos look cloudy. The lack of wind meant that the bushfire smoke had settled into the valley and didn’t clear till mid-afternoon, leaving a smoky haze in the canyon. We exited via the ridge to the right of murderind gully: Steep and scrubby, but fast. An early arrival back at the cars meant time for beers and a quick wash at the Boyd river campsite before settling in for the night.

Thursday was Kanangra Main Day, and what a day it was! We left the car at the walls at 8AM, and promtly got lost on the heath, finding a nice lookout from which we could see kanangra falls in the distance. Realising that we were probably in the wrong place, we backtracked a bit till we were on the right track. The Canyon itsself was spectacular! Not even the ants on the first ledge could deter us (we forgot to bring the Rid, even after all the warnings!). A good amount of water was flowing, and the heat of the day encouraged us to take the wet route down each fall. We found Rob’s missing rope stuck on the 2nd last abseil (There was a knot tied 2m from the end!). After hauling it up and coiling it, I started the abseil while Nicole headed back to the base of the last drop to find the glove we had left behind. About 1/3 of the way down, just where the abseil path gets right into the middle of the waterfall, I abseiled onto a knot. Luckily there were plenty of small ledges to take my weight while I pulled the rope through and untangled it, but I still spent a good 5 minutes getting a really hard shoulder massage from the waterfall. Nicole’s abseil was less eventful, and we continued down to the bottom of the last abseil for lunch. Several rain showers the night before had driven the fires even further from Murdering gully, so we tried to head up the gully. Of course we got lost and ended up way too far to the left, having to lose height and contour around back to the path.I have to say that it was the heaviest bottle of Gin I have ever carried! Even with our small navigational mishaps, we were back at the car at 5:30, and quite sweaty and exhausted. A quick wash under the tap from the water tank and it was back to the campsite for dinner, beer, and bed (oh, and half a rockmelon hollowed out and filled with Muskat for dessert. Yum!).

Friday was supposed to be Dione Dell, but it was cold and rainy in the morning, so we piked and headed to Blackheath for some all-day-breakfast goodness, before returning to Sydney.

Photos of the trip are
HERE http://picasaweb.google.com/Melochar/KanangraMarch09?feat=directlink .