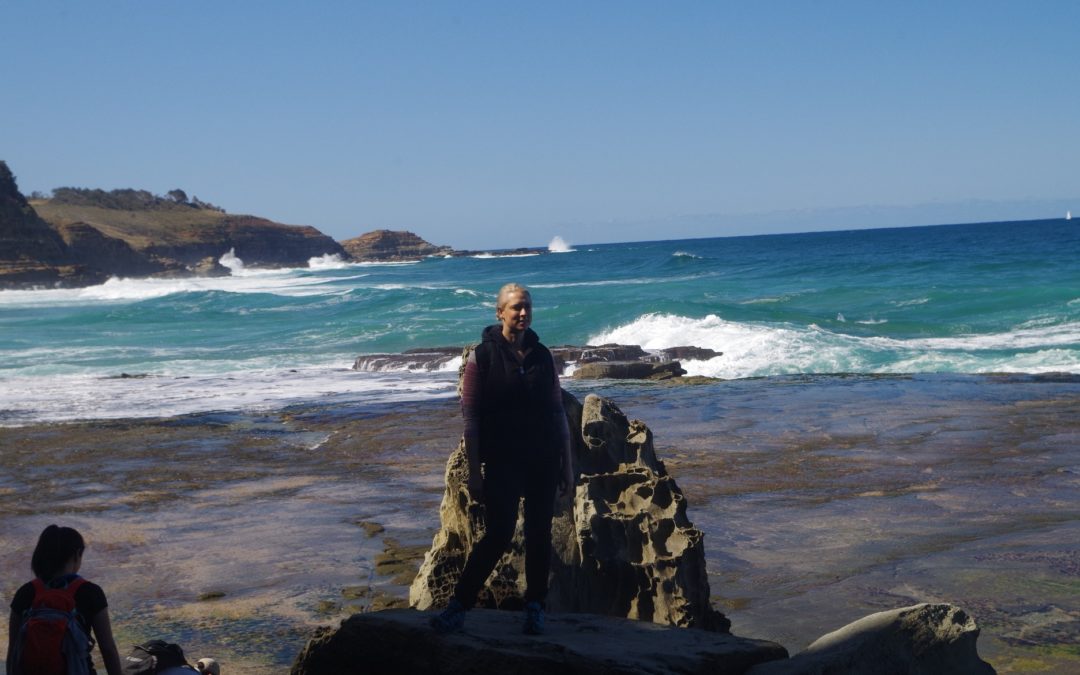 Because the walk was listed 3 weeks before the walk day, it was not too surprising that there were some dropouts in the week prior due to sickness. Still, every time someone had to drop out, I was able to replace them off a wait list. So, thanks to those people who gave me sufficient notice that they could not come.

Most of us met up for the train at Central, with Harriet getting on at Redfern and Cathie at Sutherland. At Helensburgh Station there was the usual queue for the toilets and then it was off on the walk proper. As it was decided to get the 3.15pm train that afternoon from Otford, we decided to leave a visit to Metropolitan Tunnel for another trip, as it would have eaten significantly into the time we had available for the whole walk.

We walked through the station car park and then across Wilsons Creek Road straight onto a track which goes beside the fence by the rail line, rising very steeply initially (despite this it is used by locals as a short cut to the station). Then by a couple of service tracks paved with railway ballast, behind the houses fronting Gardiner Place. At this point the track meets the fence of the Helensburgh Tip and becomes the “Burgh Track”. Not far along this rough track we came to an unpleasant surprise: a rotting deer carcass on the track, rather smelly. This upset some of our walkers (and I have sent a message to the Minister for the Environment of the need to remove it from the walking track). It appears to be the victim of the present deer cull taking place in the Royal National Park (the Rusa Deer are not native and have been causing environmental damage).

After passing the tip the track widens to a fire trail, crossing over the present Helensburgh Tunnel and staying level for a while through heath land before starting to drop down through wooded country as it headed for the Hacking River. Not too far along there is a track junction – easily missed as it is only denoted by just an arrow. Before entering this track I told everyone that they should not stop until they reached the river, as this was Leech City. We went along that track through a lot of Cabbage tree Palms and open woodland and then meandered along until reaching the river. It was quite dry along this section, very unusual, but then we have had very dry weather the past several weeks. I also noticed that the path is becoming more defined, whereas in past years the track was not at all obvious. This suggests that it is becoming increasingly used as a track to get to Figure 8 Pool from Helensburgh Station. Even so  we did not see any other walkers on this track.

So we came to the Hacking River which was exceptionally low due to the prolonged dry weather. It was very easy to cross and only Cathie managed to get one foot wet in the river. Then it was on to another track which met Lady Wakehurst Drive after 100 metres, and then straight across the road to climb up the hill on the way to Garawarra Farm. Not far from the top and out of the wind we stopped for a needed water break after the steep climb. I also took a head count to make sure no one had been taken by man-eating leeches. From the top of the grade the track stays fairly level, passing through mainly heathland. Noticed that there has been some hazard reduction burning here very recently. Then it was on to Garawarra Farm car park where we noted ahead of us a large group obviously headed for Figure 8 Pool but also unfortunately taking with them a loud ghetto-blaster. (noted also that there is now a park and pay meter there – $12 for parking [on top of the Park Entry fee?]).

There was also a sign there stating that the Royal National Park was closed each night from 8.30pm to 5am this week for deer shooting.

Fortunately, I would say, a couple of our group needed a loo break in the port-a-loos there and that put some distance between us and the group with the ghetto-blaster. Then we went down the final section of the Burgh Track, and encountered the new boardwalk section built to stop erosion on the track. Halfway along there is a lookout with a good view of both Burning Palms Beach and Figure 8 Pool. I told them how to spot rips on a beach (see photos), although the beach today looked rather rough its whole length. Some waves were breaking against the rock shelf next to Figure 8 Pool but didn’t look too high. We continued down past the shacks and the surf club down to the north end of Burning Palms Beach. Although it was a sunny day it was also cool, about 22 degrees C, so no one intended swimming (and in fact there was no one all all in the water). We found a spot among rocks in the middle of the beach for lunch.

Then it was off to Figure 8 Pool, which for some overseas students would be a trip highlight. I noted though that the tide had turned and was starting to come in again (in any case it was not a particularly low tide at 0.41m). Also, the wind had picked up meaning that the sea swell was going to increase, and it did. We clambered round the rocks as far as the first point, but it soon became clear that with the rising tide and more so the significantly increased swell, that further progress was unsafe. Where we had been able to walk on dry rocks back in April, was now being hit by waves. So we had no choice but to backtrack back to the beach. There were (as usual nowadays) hordes of tourists there, and on the way back to Otford we came across still more heading to Figure 8 Pool (who obviously had not checked the tide charts).

After another head count to make sure everyone had got off the rocks, we continued along the Coast Track which also has a new boardwalk, and provides great views south as far as Wollongong. After the Lomandra section we entered Palm Jungle which we were pleased to note was not muddy underfoot (due to the dry spell) and appeared to have not been too badly affected by the foot traffic. After Palm Jungle though, the track starts to climb fairly steeply and does not level out until reaching Werrong Lookout, about 400 metres before the junction with the Cliff Track (which runs between Garawarra Farm and Otford Lookout – still don’t know why Wildwalks calls it the “Squeezeway”).

We had a brief stop at Werrong Lookout to recover from the climb, and then got everyone moving for the last section to Otford Lookout and then Otford Station. We walked the next 400 metres to the junction of the Coast and Cliff tracks, and waited there until everyone was gathered together. Another head count – but only 11 persons, including Ralf and Robert accounted for, but still waiting for the other 3 guys. After a couple on minutes they still hadn’t appeared, and Robert said that he didn’t notice anyone behind him. Someone suggested that it was possible that they might have turned right at the Werrong Lookout by mistake and were inadvertently heading back towards Burning Palms.  Or, were they ahead of us, in which case had they gone the wrong way at this track intersection? I got out my list to check their mobile phone numbers but oops! I had not written theirs down! Rebecca then suggested logging in to the SUBW website on my phone, but the mobile signal was not good. Also, time was now starting to run short to get to the 3.15pm train at Otford, and we had already wasted several minutes at this spot. Cathie recalled that Zhong (one of the three) was continually looking at his GPS during the walk and could probably find his way to Otford Station if he took the wrong track. The decision was then made to continue on to the Otford Lookout and hope that they were there.

We reached that lookout but the 3 guys were not there. More discussion, but by that time we had very little time left to get to the 3.15pm train and in fact worked out we were not going to make it. Victoria suggested that we should go to Otford Station where we could at least get the 3.30pm Wollongong train and change at Thirroul for a fast train, and once at the station try to contact the 3 guys again. We got to Otford Station 5 minutes before that train arrived, and just as I started to try to check their mobile numbers again, a message came through from Zhong stating that they were on the (3.15pm) train and thanks for organising the trip. So, we got the 3.30pm train which took us all stations to Thirroul. Not knowing the area, we were (of course!) at the wrong end of the train for the stairs over to the platform for the Sydney-bound train, which was arriving just as we were still on the stairs. We rushed to get this train and just made it. It’s next stop was Helensburgh as it was an express train. It got back to Sydney at 5.15pm, an hour later than we had planned. Still, better than being 2 hours later which is what would have happened if we had had to wait for the 5.15pm train from Otford. (I have previously taken up with the Minister for Transport the issue of Otford and Stanwell Park only having a 2 hourly train service on weekends, and I will do so again).

The walk was enjoyable in fine mild weather and everyone liked it despite not being able to get all the way to Figure 8 Pool, and the muck-up with the trains at the end and the 3 guys separating from the group. (I did let them know later that I was not happy about that).

Two lessons to be learned from this trip:

Incidentally, despite passing through Leech City next to the Hacking River, no one on the walk reported any leeches. Possibly due to the dry weather, but also maybe due to people not stopping on that section of track.

There is another track running off the Cliff Track, just 300 or so metres back from the junction with the Coast track. It’s called the Lilyvale Track and once provided access to the former Lilyvale station located between Helensburgh and Otford. It was closed by the transport bean-counters in 1983. Even so this track might be worth exploring because it comes out at Lady Wakehurst Drive not too far from the end of the Hacking River Fire Trail which leads back to Helensburgh Station (and part of which was the first part of our walk). Maybe an exploratory walk for sometime next year.