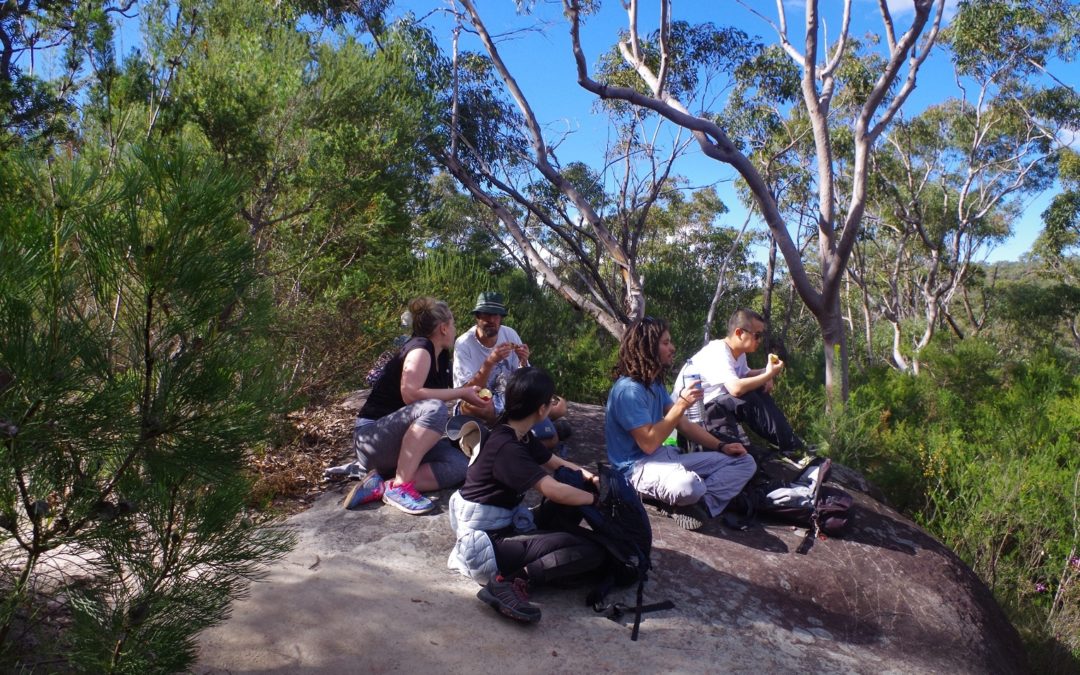 10 of us met up at Cowan Station, but as both Cathie and Demerson (individually) had been delayed by heavy traffic (Demerson having discovered the traffic Black Hole that is Pennant Hills Road), some went over to the boat shop across the tracks, and the rest of us sat in the welcome sun on this chilly day, out of the wind. Eventually Demerson and Cathie arrived (I had arranged for Cathie to meet up with Demerson at Hornsby and they came up in one car), and after we exchanged greetings and watched a passing steam train, set off for the walk.

The walk crosses the M1 Motorway (formerly F3) and then follows Yatala Creek down to Jerusalem Bay. The track is fairly rough in places but at one point crosses the creek where it runs clear and clean – probably safe to drink (Later on it becomes salt water as it enters Jerusalem Bay). Along the way there was a lot of Boronia and Wattle in flower (see photos). Eventually we reached Jerusalem Bay for a brief stop to admire the view, before continuing on over a gully I call “Leech Gully” as some walkers in the past have been known to acquire leeches here if they stopped to take photos (no one did this time). Then it was the rather steep climb to the top of Govett’s Ridge where we had a water break. From there it was fairly level for a while before dropping down another sction of rather rough track to Campbell’s Crater and the creek running through it. Some people commented on the rusty orange deposits on the bed of the stream. Apparently it is the product of natural bacteria which utilise Iron and the colour is from a hydroxide of Iron. It looks like pollution but is quite natural. After that spot the4 track rises again to eventually reach another high ridge, but before then we looked for a suitable lunch spot, in the sun but out of the chilly wind (which blew non-stop throughout the day). One was found on some large rocks. After lunch we continued up, passing through the mini Taros ladder to reach the wide railway access road which runs level at the top of a ridge for a few km. Just before then we signed the log book, and noted an entry by the party ahead of us: “Too many snakes – almost died” . Well, we didn’t see any snakes, nor did we expect to on this cold day. You might have noticed my advice on the trip announcement about keeping your head out of your iPhone. Well, no one stepped on any snakes but someone walked right onto an ant hill while checking his iPhone. Just as well they weren’t bull ants! Eventually the track drops down to where there is a shortcut which goes beside the wall of Brooklyn Dam (the dam can be circumnavigated by continuing along the regular track but adds over a km to the walk). At the Dam we stopped for another water break, and then continued up hill on the last section. At the sign which said ” Brooklyn 1.6km” we deviated long the old track which does not see a lot of use now but is almost 1km shorter, and also avoids the steep concrete Railcorp road. (Warning – don’t use it unless you have walked it before, as there are several sidetracks which lead to dead ends).

We came out above Hawkesbury River Station with only 15 minutes to wait for the next Sydney train.

It was a nice walk which offered views over the Hawkesbury and a profusion of wildflowers. Pity about the three outright ” no shows”. (This does not include the person who had called in sick previously, nor the person who thought it was on Sunday not Saturday and had to withdraw to get assignments done). I chose Saturday as there are some members who can’t come on sunday walks. It was fortuitous for another reason – it turned out I was incubating a Cold, which became evident by Sunday.