Danae Brook and Thurat Spires in a day 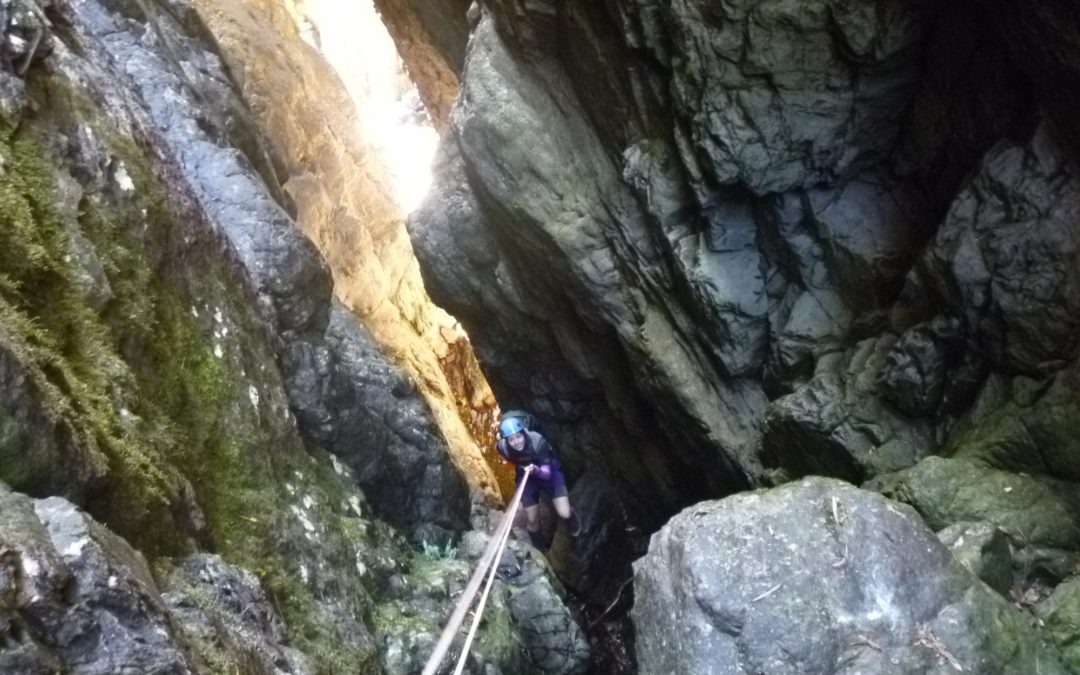 Adrian had planned Danae Brook and Thurat Spires back in March when he was not able to join Helen & Kosta on their trip. He chose the longest day of the year, aware that it was precisely between moons, and it had long been on Ian’s bucket list. Ian and Adrian had not canyoned together before, and had last done Danae Brook 20 and 30 years ago respectively. The cousins Kimberly and Brendan were prepared to follow in blissful ignorance, never having seen the daunting view of Thurat Spires from Kanangra Lookout.

After Saturday night dinner at the Royal Hotel in Oberon, we camped at the sparsely populated Boyd River Campground and set the alarm for Sunday 4.00am. It was 5.30 before we headed north along the Mount Thurat Firetrail. Across the Kanangra Ck fords, and up past a marker cairn onto Thurat Broad Ridge before we turned east and descended to our target gully. Dave Noble’s notes were spot on – traversing 50m above the creek line, generally on the right hand side, proved to be relatively scrub free. 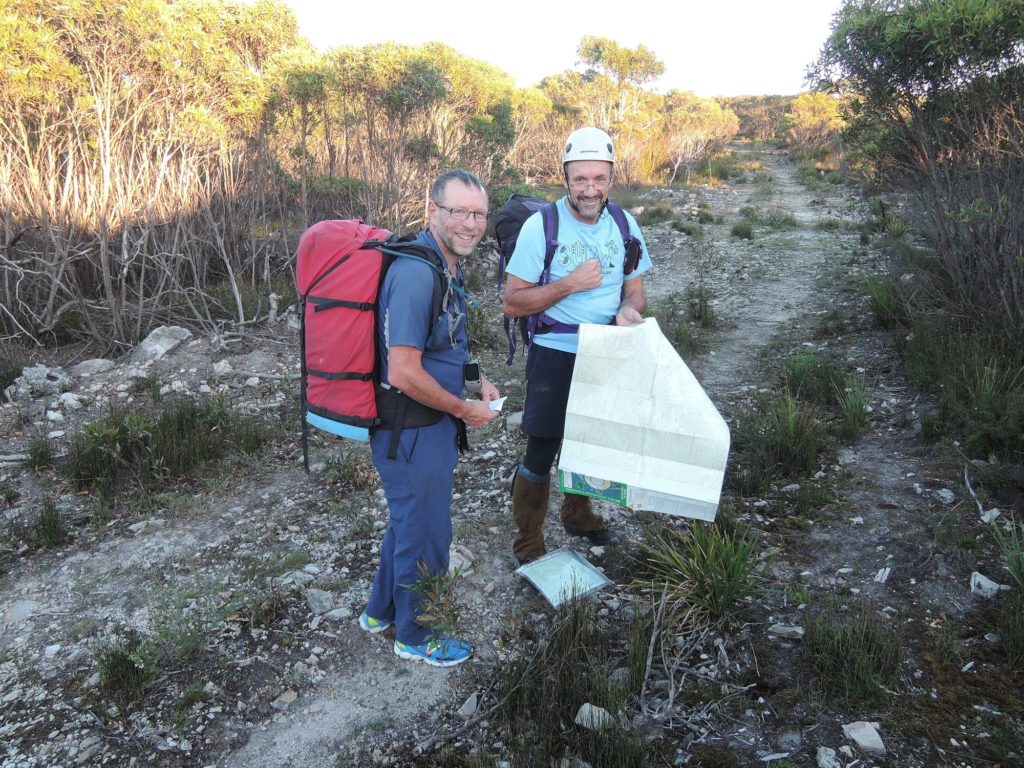 Ian & Adrian on the Thurat firetrail

We reached the first abseil at 7.10, and were rewarded by fantastic views down the gorge in perfect weather. The water level was low, and cold was never an issue, especially as Ian and Adrian were each testing out their new Aldi full length wetsuits.  Kimberly was quite taken by the clean lines of each of the 9 abseils which followed close on each other. No difficult starts, all about 30m long. Ian introduced us to the cavers’ technique of stuffing our 2x 60m ropes into rucksacks rather than coiling. 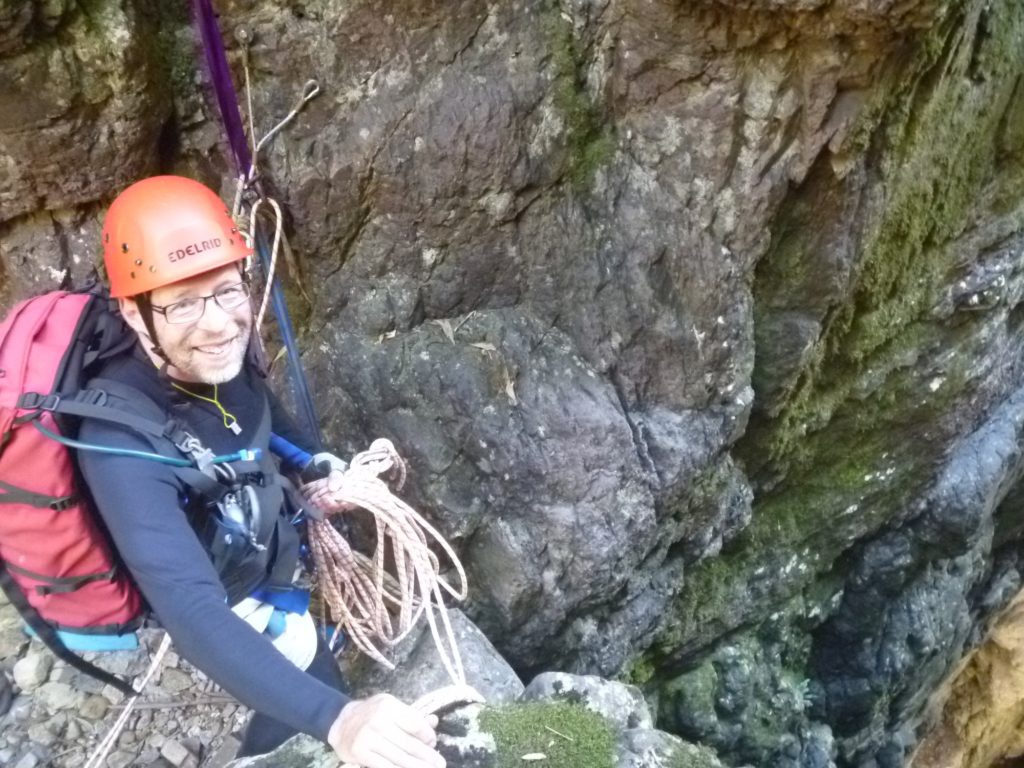 Ian at the top of Abseil 3 – one loose bolt, one missing bolt, backed up by a well place nut & sling 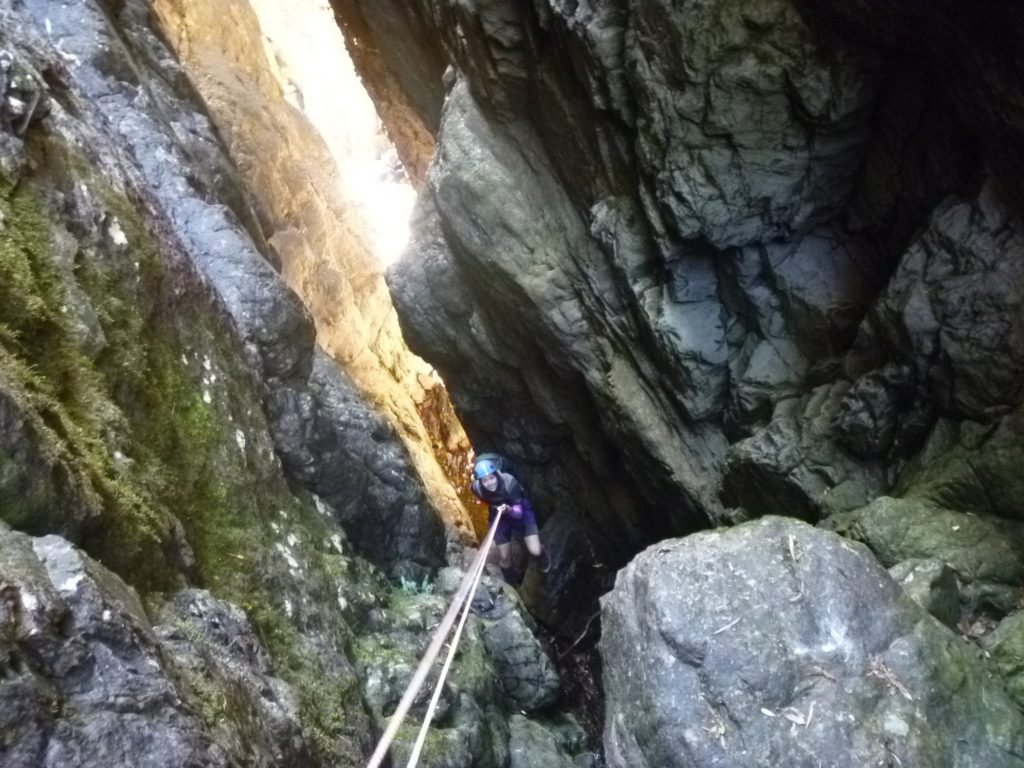 Kimberly on abseil 3, heading for the chockstone

We of course benefited from the good notes available, and the revised anchor points over the years.  The 3rd “chockstone abseil” anchor point is now bolted, though one bolt is ripped out, the other is decidedly wobbly, but is backed up by a well placed nut above. We followed the advice for 3 to abseil inside the chockstone and the last person to abseil over to facilitate the pulldown. The 4th “waterfall abseil’ was delightful, and the 5th “Danae Direct” anchor point has been relocated above the hole. The 6th “slippery log abseil” has a handline leading to it, would be a decidely tricky start in high water, but was a delight with the dry conditions we had. The swim from the bottom of the 7th abseil was sped up by dragging the abseiler across the pool hanging onto the rope. 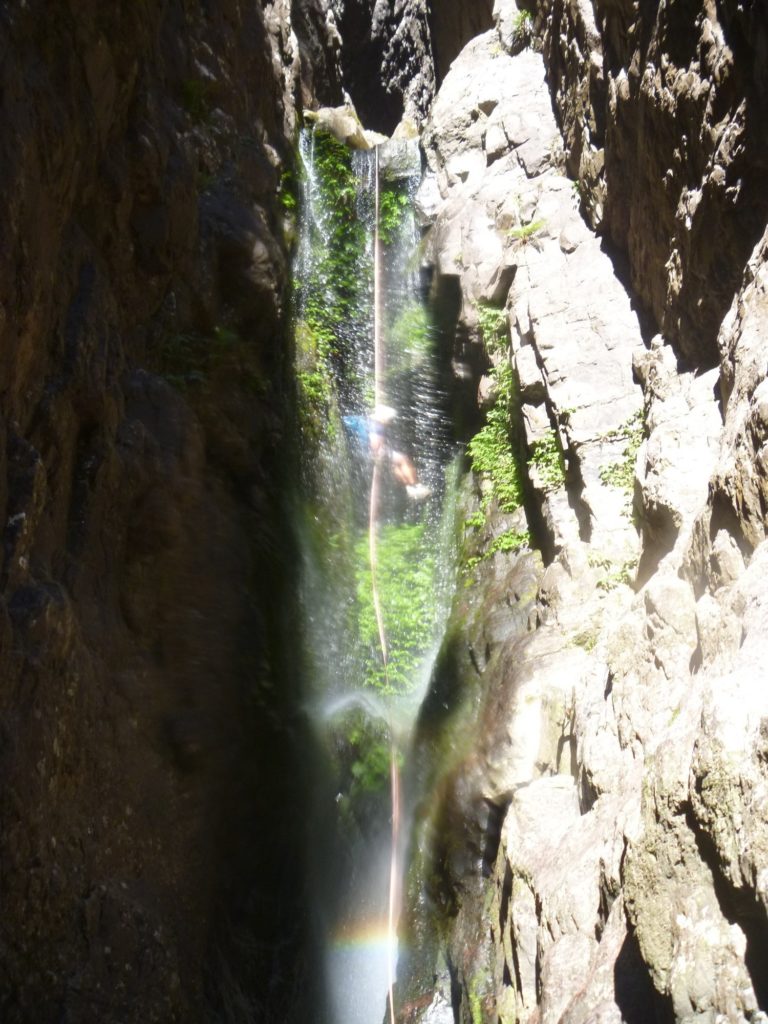 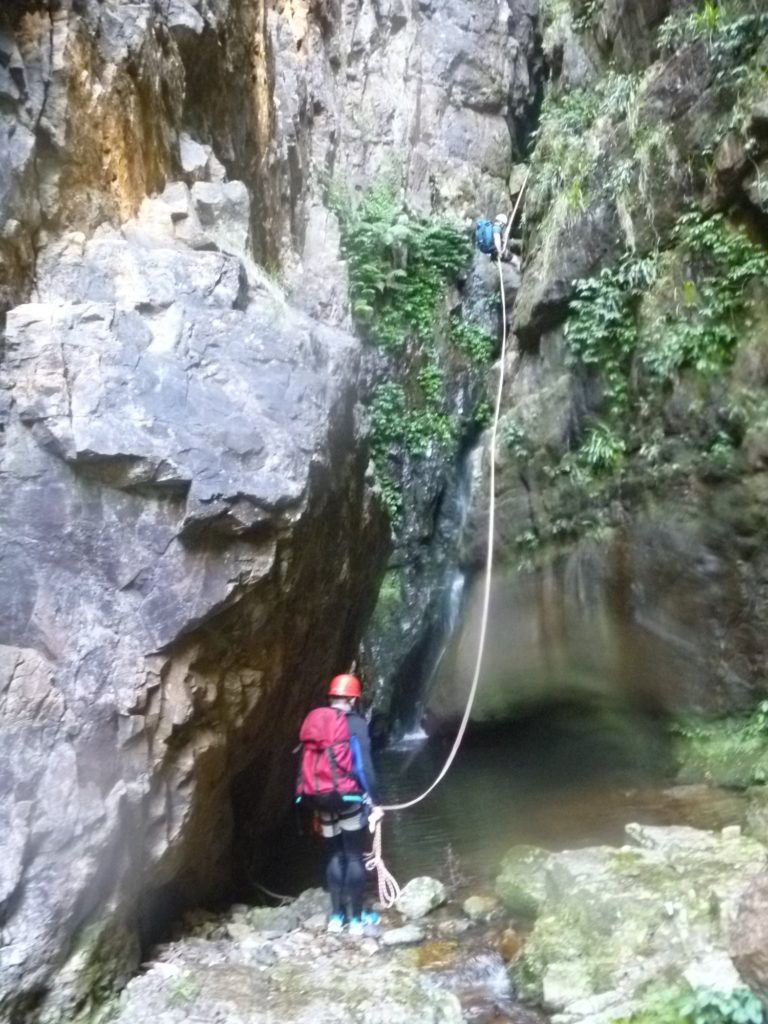 The swim from the bottom of the 7th abseil was sped up by dragging the abseiler across the pool hanging onto the rope.

Next came the infamous boulder field, and we negotiated the tricky descent left of the beautiful clear pool that would otherwise have required a jump and swim. Later we stopped for lunch at the first trickle of water reemerging in the boulder field. This was too early, for just around the corner we hit plenty of water and the final (10th) 15m abseil on the right hand side into a pool and requiring a wade.

The stupendous views down Danae Gorge 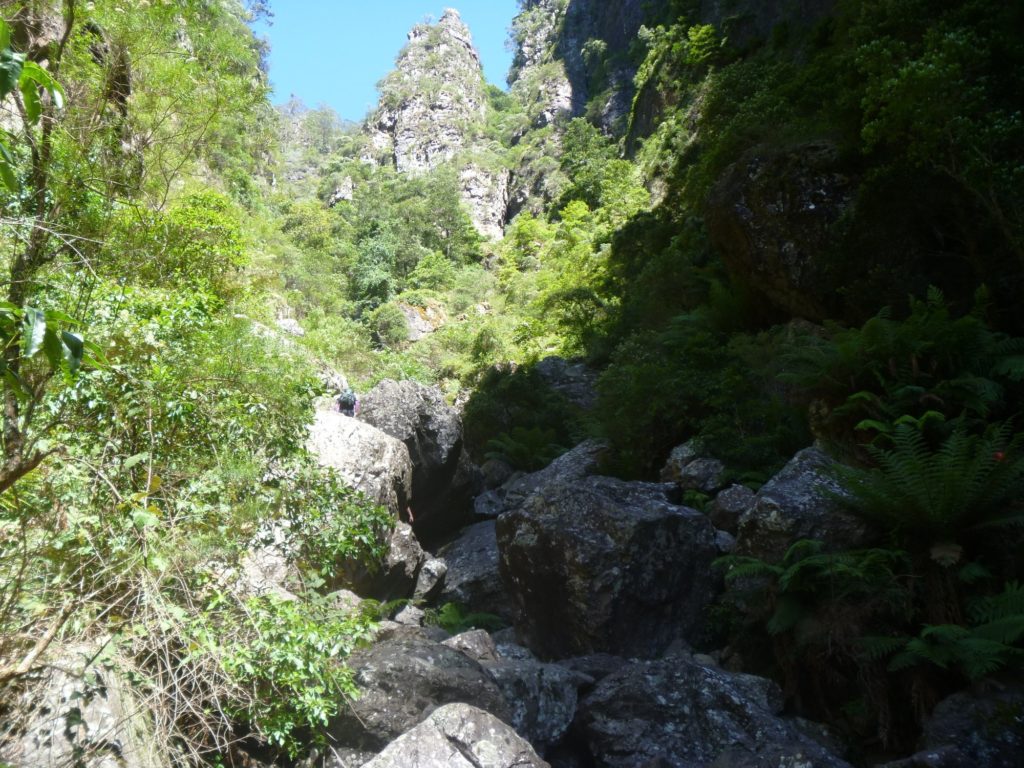 Looking back up the boulder field

The long descent through the Pooken Hole narrow gorge was uneventful, punctuated only by the occasional rasping noise of snake scales sliding over the undergrowth and the fleeting glimpse of black tails disappearing down some hole.  We passed under a number of birds nests overhanging the creek bed. These hanging bottle shaped nests can pass as flotsam from floods, but are Brown Gerygone (pronounced jerr-ig-onii) nests, though we never saw any of these shy dainty brown grey birds.

We reached the junction with Kanangra Creek, and noted the track heading up the opposite bank to Kilpatrick Causeway. We ate more food and drank our fill in an effort to shake off our lethargy. At 13.00 we headed up the loose dirt ridge – 2 steps up, 1 step back. When the ridge finally leveled out, the map revealed we were only half way to the bump on the way to Thurat Spires. Finally the bump, and narrow ridge line of the 1st Spire. We almost became dizzy watching a wedge tailed eagle circling continuously above us, and Adrian pointed out Kanangra Lookout and Kalang Falls across the valley. We heard a few faint wild dog calls from downstream. 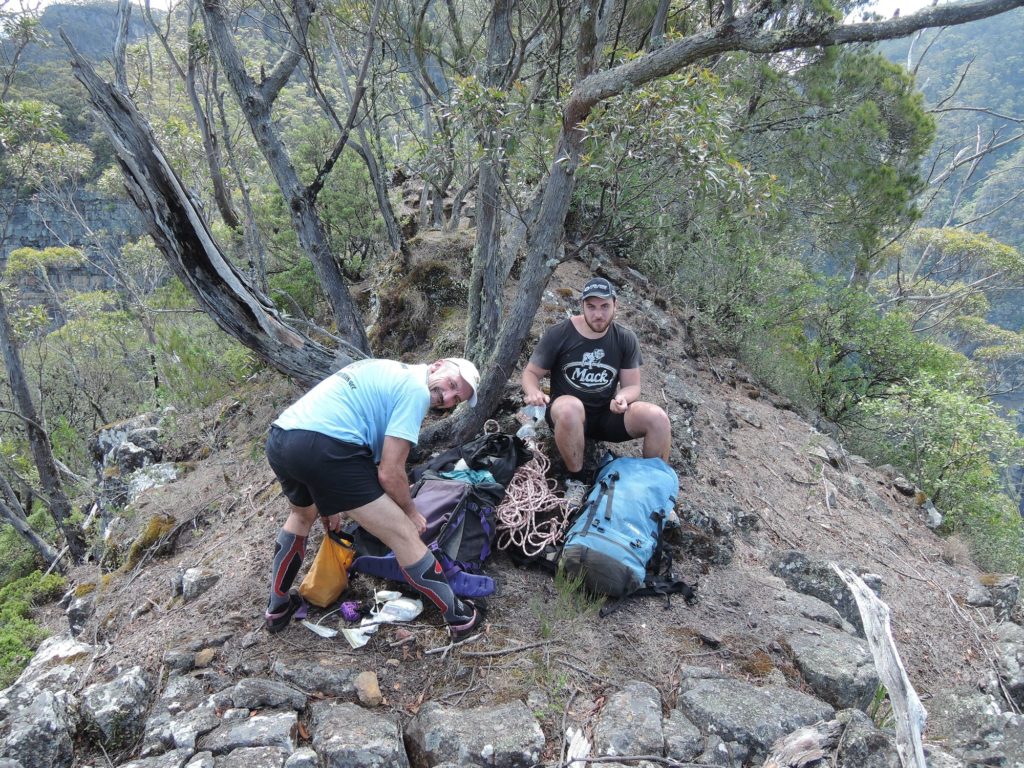 Cramps! Looking for the salt on the 1st Spire 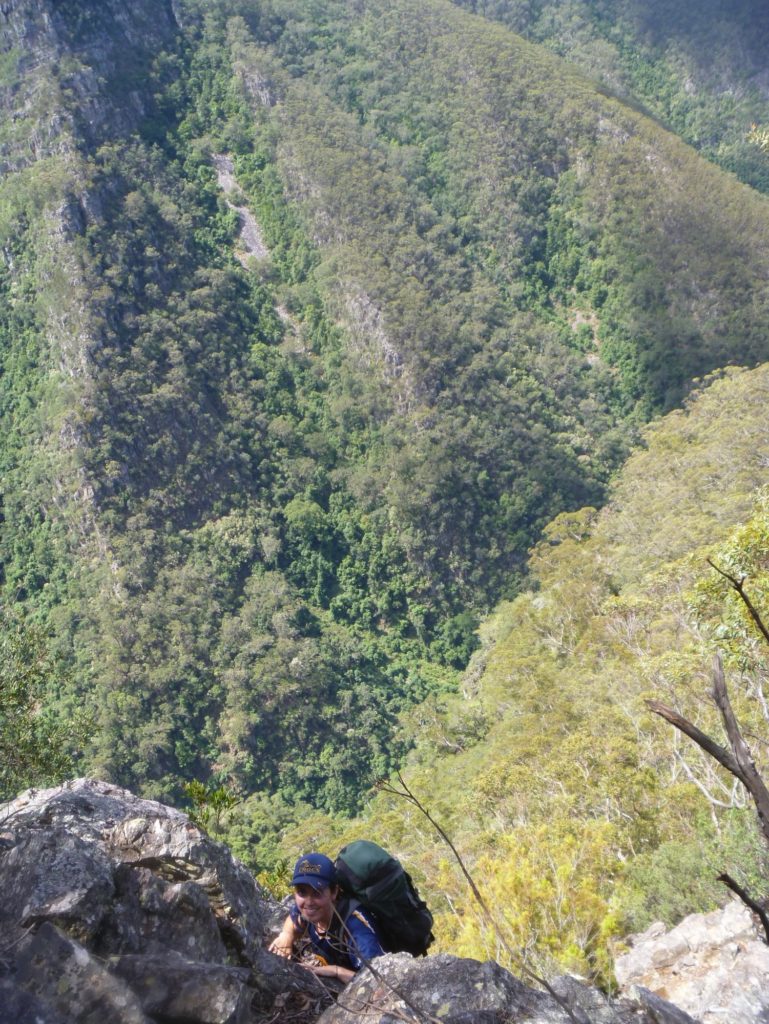 Kimberly ascending the 2nd Spire, with Danae Brook below

The descent off the 2nd Spire appeared to be towards an abyss, and we had trouble identifying the indistinct route to the first abseil anchor point. A rockfall had hidden the most used route, and Adrian was apprehensive at the lofty exposure that threatened. This was compounded once we located the anchor, and it was only on rope on the lip that he could see the trees below with the rope dangling in foliage –  a mere 24m abseil as indicated by the guide. Kimberly located the next belay point, a 10m abseil onto the saddle. 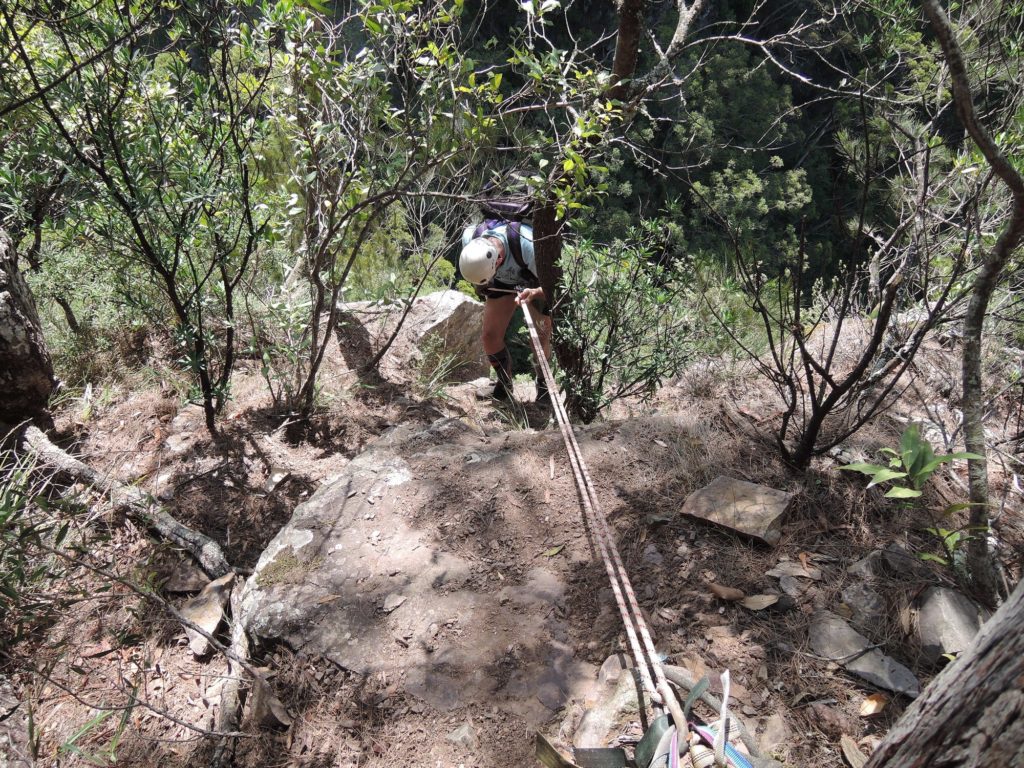 The track was easily found to the right of the expanse of rock in front of us, and Kimberly led off on the climb up Spire Head. It was exposed in places, but not too daunting (thank goodness for daypacks), and afforded clear views of Danae Brook below us. Running out of water was a challenge, and once we cleared Spire Head we hit the expected scrub as we made for Big Misty. Ian was keen to follow the southern escarpment (bordering on Kanangra Main) and this did indeed prove to be the path of least resistance. 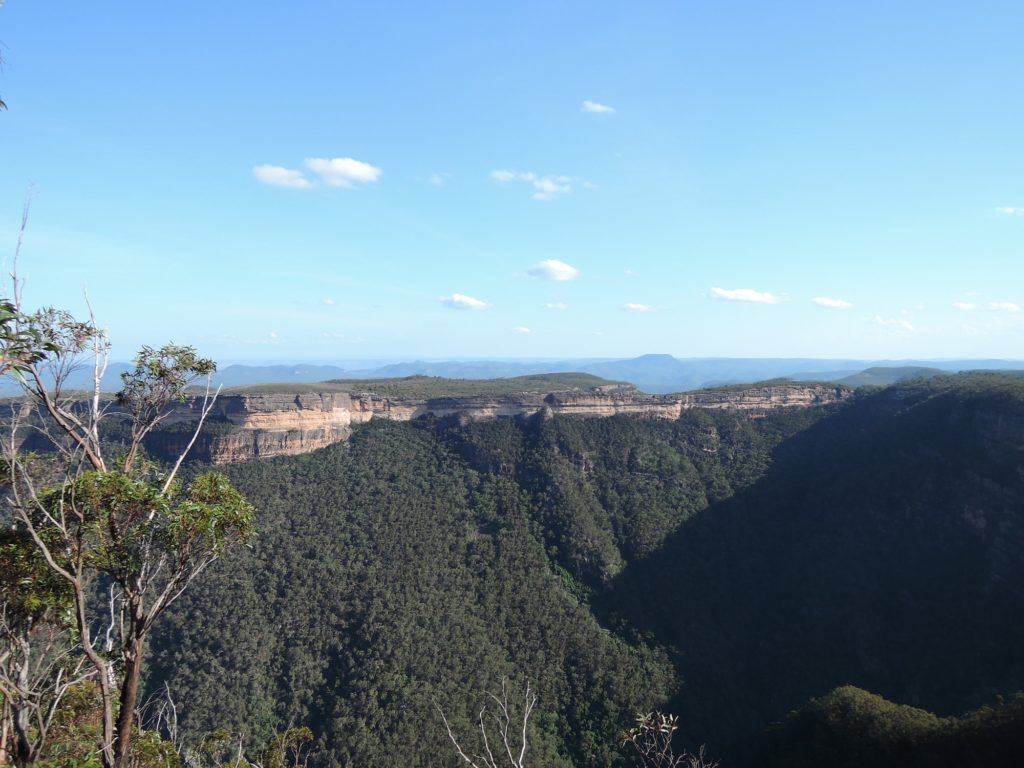 View from Spire Head towards Kanangra Walls Lookout, with Kalang Falls on the right 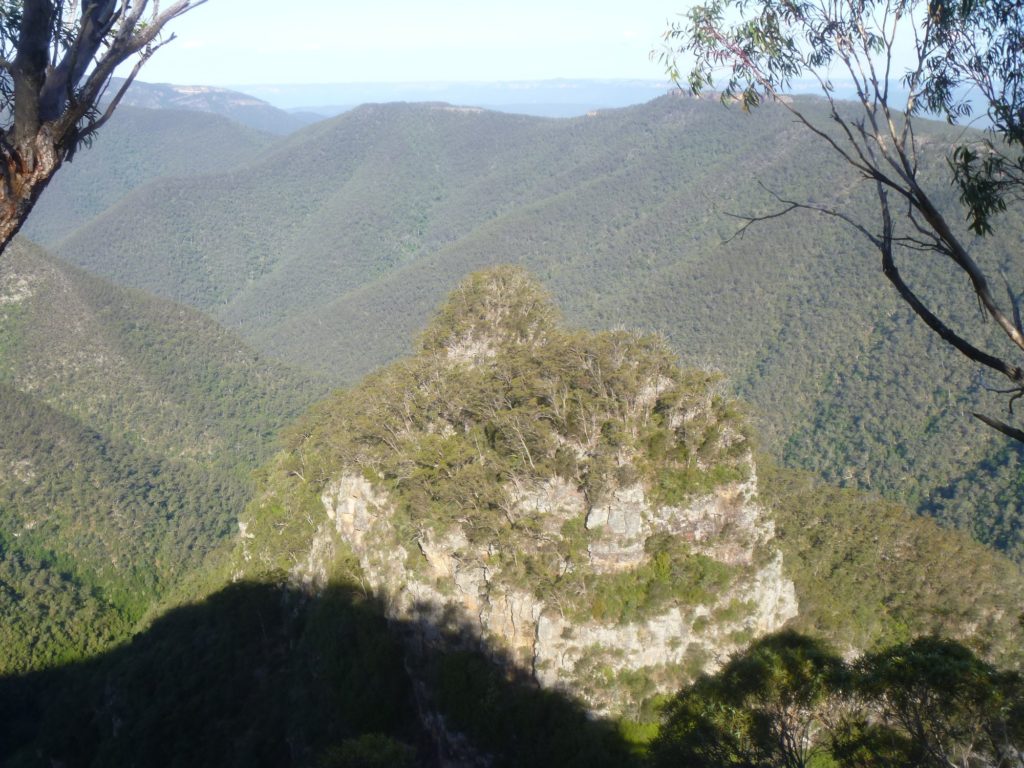 Looking back on the 2nd Spire from Spire Head

From Big Misty we walked on the same compass bearing all the way to the firetrail through fairly clear terrain over a number of gullies, except for one steeper section at Misty Gully in the middle. We came out on the Thurat firetrail at the previously noted cairn at 19.15, and raced downhill to slake our thirst in the Kanangra Creek fords. Ian commented that navigation often proves the biggest test of teamwork amongst party members, and we were pretty happy with ourselves on that point. We reached the car at 20.15, 15 hours since we had left.

Monday morning was a leisurely 9.30 start back to the Thurat Firetrail, this time to head south to Dione Dell. Ian had deep blisters and settled down at camp with Kimberly’s kindle. A wise choice, as the 1km walk down Dione Dell was on steep hillside and would have been painful for him. As the first abseil was 33m, we had brought a 60m & 40m rope, and felt we probably could have got away with just the 60m rope (as long as it didn’t rain, for this would have made the final scramble challenging). Standing on the lip of the waterfall, we belatedly realized that the anchor point for the 2nd abseil was above us. 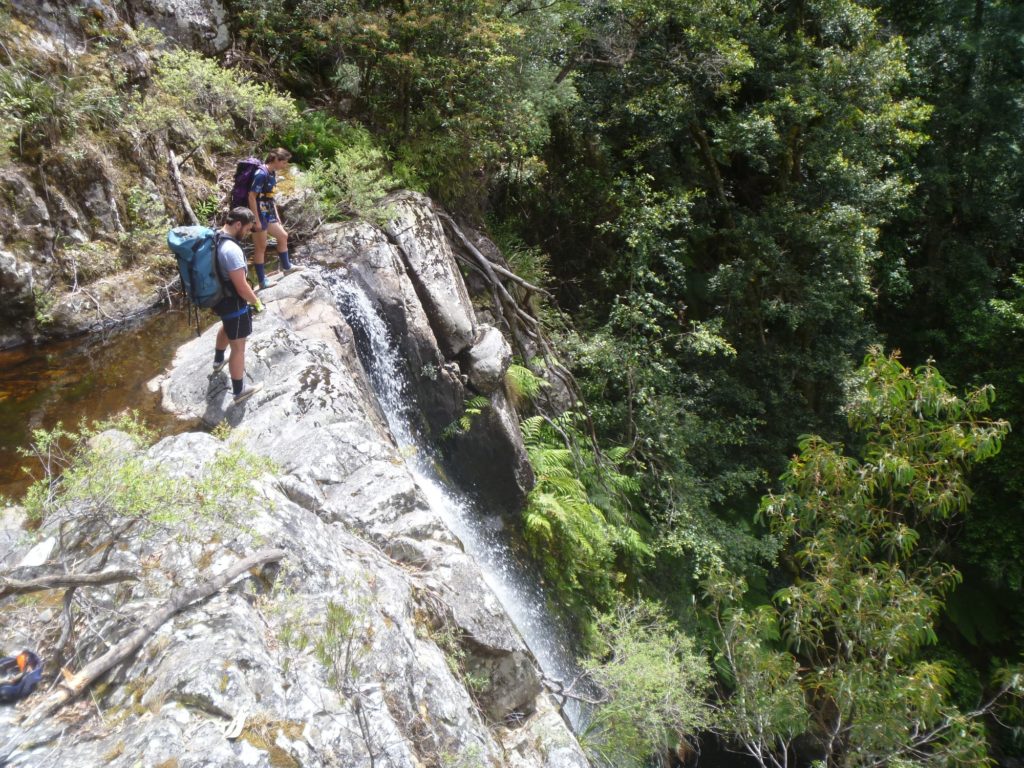 Brendan and Kimberly searching for the 2nd abseil anchor. It is above Kimberly’s head

We intended to have lunch at Margaret Falls, and had just finished the 4th abseil when the rain came accompanied by peals of thunder. Brendan pointed out as we coiled the rope that we were sheltered there and maybe this was a good lunch spot. 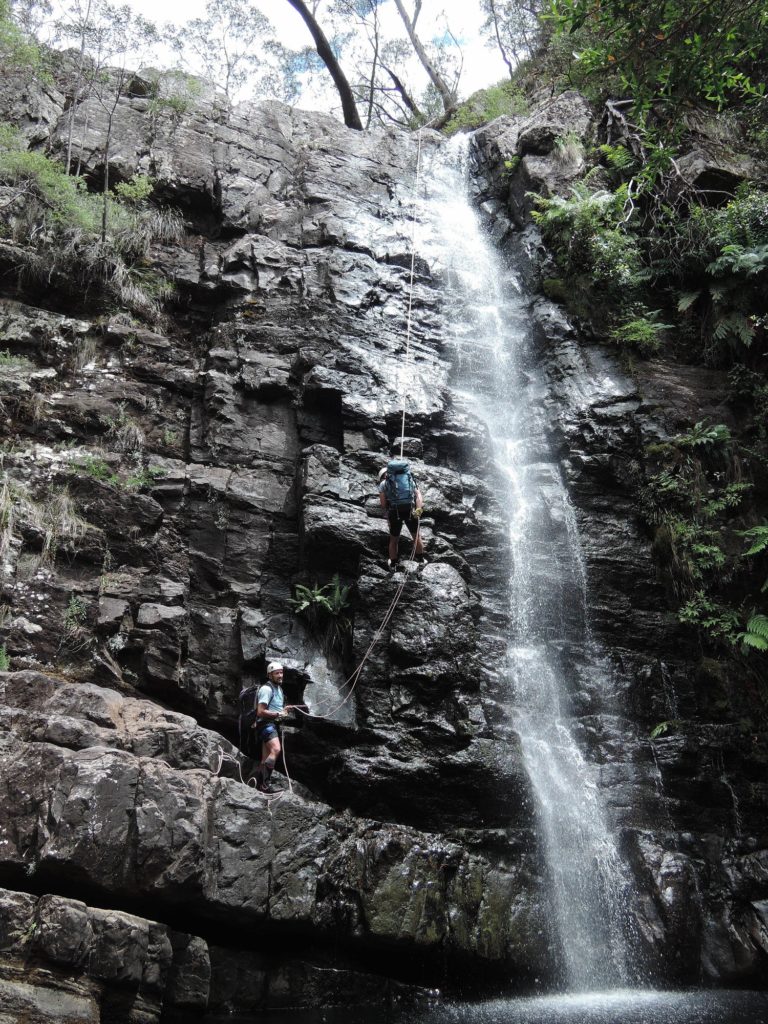 Adrian & Brendan on the 4th abseil, where we had lunch during the ensuing deluge

As the rain intensified (it hailed up at Boyd River campground), we lamented our lack of raincoats, wetsuits and anything else that provided any form of shelter or warmth as the temperature plummeted. We delayed longer than we would have liked, and finally moved off when the rain had dissipated to a sprinkle. We decided we no longer wanted to make for Margaret Falls, but presumed we had to go that far to pick up the track onto Pindari Tops. On a whim, shortly after the canyon broke down, we were able to cut left up the hill and pick up the track to Pindari Gap. Past Uranus Grotto, and up Wallaby Pass. Our smugness at keeping relatively dry was short lived, for we became totally soaked from pushing through the moisture laden scrub across Pindari Tops.

On the road, Kimberly jogged off to collect the van and we drove down to the Kanangra Walls lookout to admire Thurat Spires in the evening light. Actually, it looks mad, and we have to congratulate those who first made the journey over them.

On the way back to pick up Ian at Boyd River at 16.00 and to change into dry clothes, we stopped to watch a young echidna wander across the road, and remembered the young wombat we had watched 2 nights before.

What a fantastic 2 days it had been, and we appeared to have had these iconic canyons to ourselves.