Danae Brook with exit via the Spires 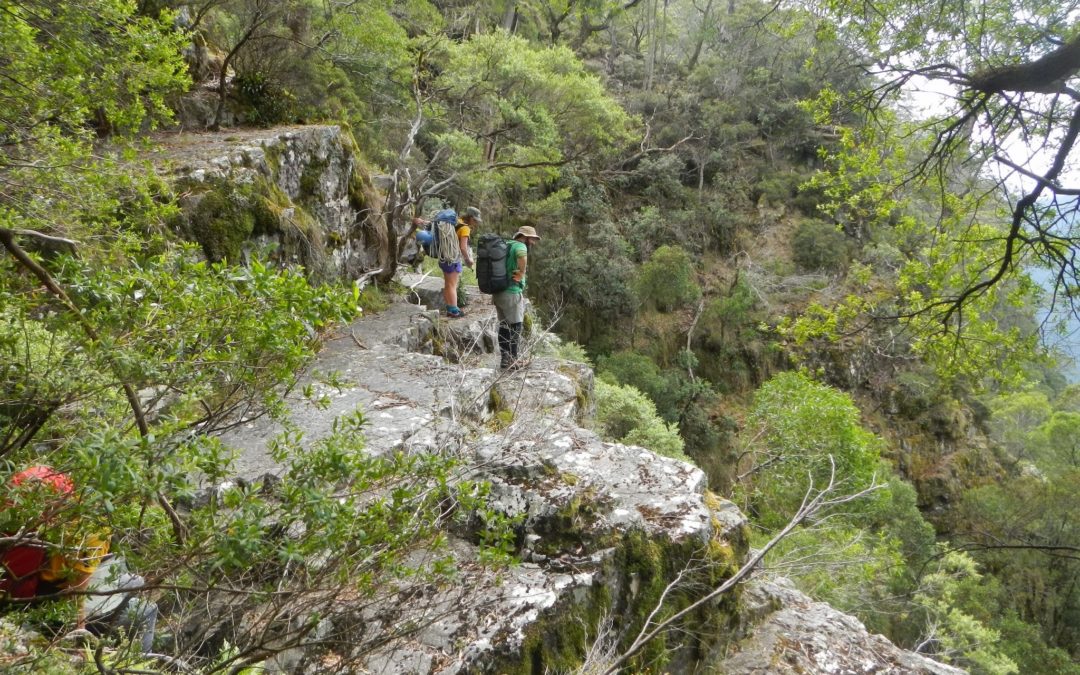 Danae Brook is one of Kanangra’s most iconic slot canyons and well known for being a long, challenging, yet spectacular trip. There are several exit options, but arguably the most interesting one involves scrambling up and over Thurat Spires.

With my thesis submission date looming ever closer, I decided to take procrastination beyond the astonishing depths of “the internet” and lead a trip out at Kanangra. Within a few hours of posting the trip, I had 6 people sign up, making the group size slightly larger than expected.

Fortunately as the trip drew closer a few people bailed (“man-flu”, “manstuation”, “failed to get a leave pass” etc etc), reducing the group to a much more manageable size of 5. Strangely enough, once again I was the only female on this trip…. looks like we need to recruit a few more women into the canyoning sphere of SUBW!

Kosta and I drove out on Friday night and encountered a ridiculous amount of wildlife on the road between Jenolan Caves and Kanagra Walls. After carefully avoiding around 30+ individuals, we unfortunately hit one that jumped into the car as we were passing. It’s safe to say that the roo was fine… but the car wasn’t.

Miraculously, we all met at the Uni Rover fire trail campsite despite our cars coming from other parts of NSW and ACT. One car was surprised by the amount of moonlight directing them to the correct camp spot.

We got cracking by 8am the following morning and after only a minor amount of scrub bashing we hit on some nice open woodlands that took us to the start of the canyon.

The views into the slot were spectacular, and we were relieved that the water levels were lower than what previous SUBW groups have experienced. 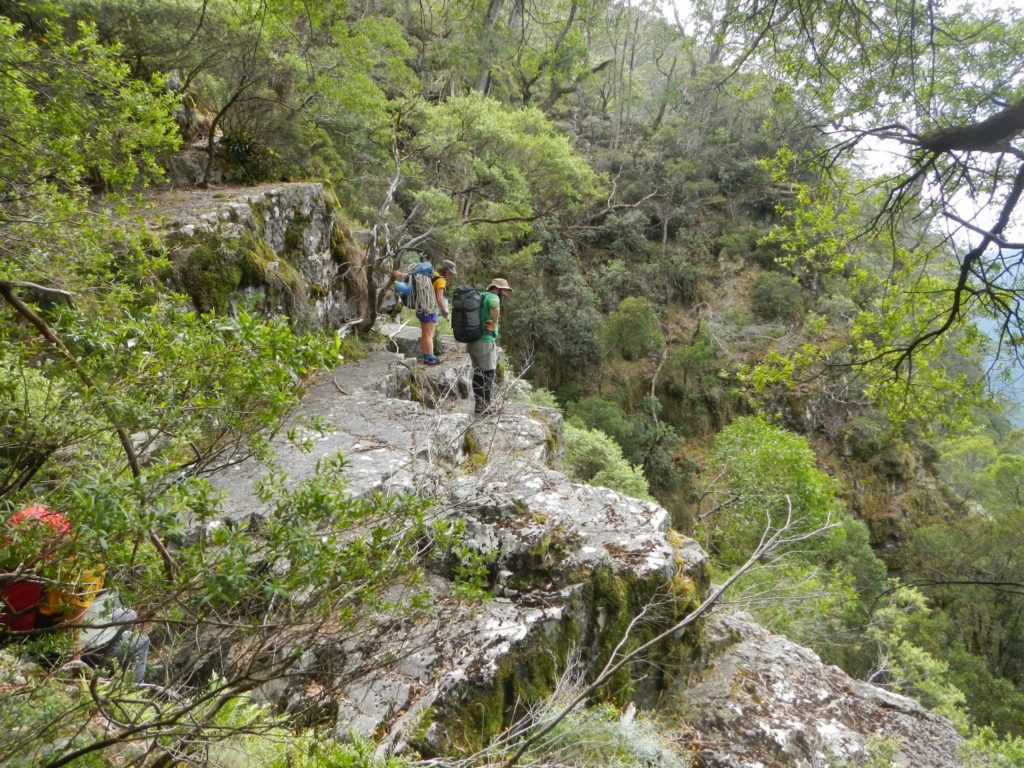 We scrambled down the part of the waterfall on the left, and began leapfrogging our way through the canyon — sending all the spare ropes to the front of the group — and using single-rope techniques to ensure a safety rope was present for everyone except the last person. 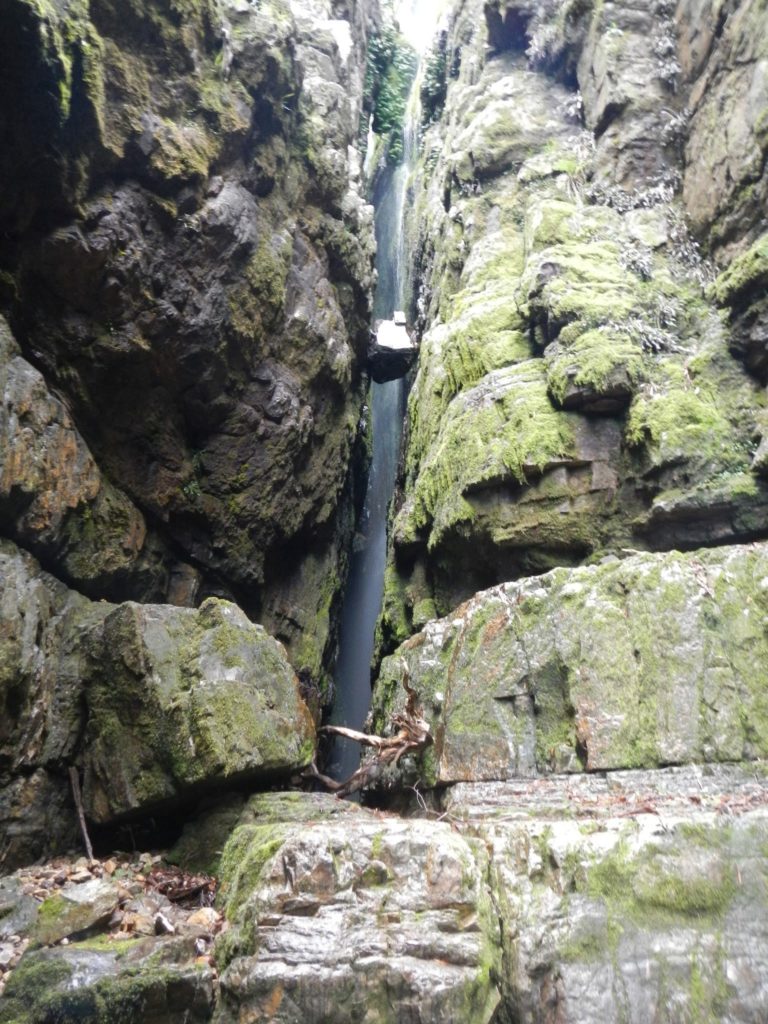 The iconic chockstone where many ropes have been stuck previously….(Photo by Stephen) 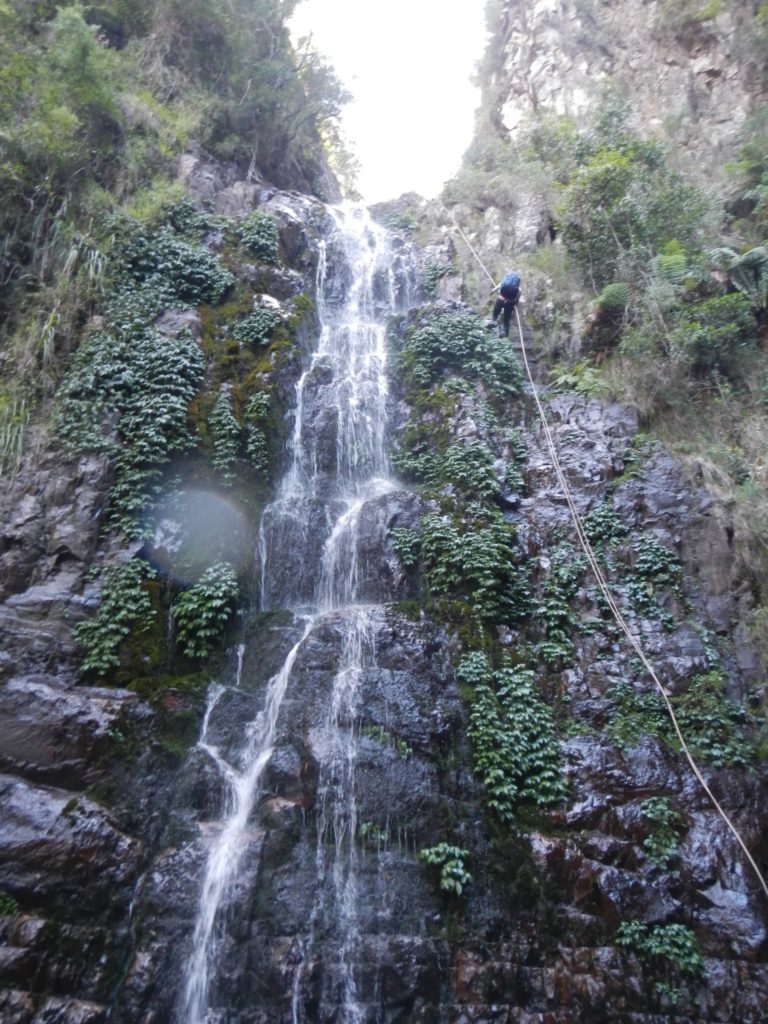 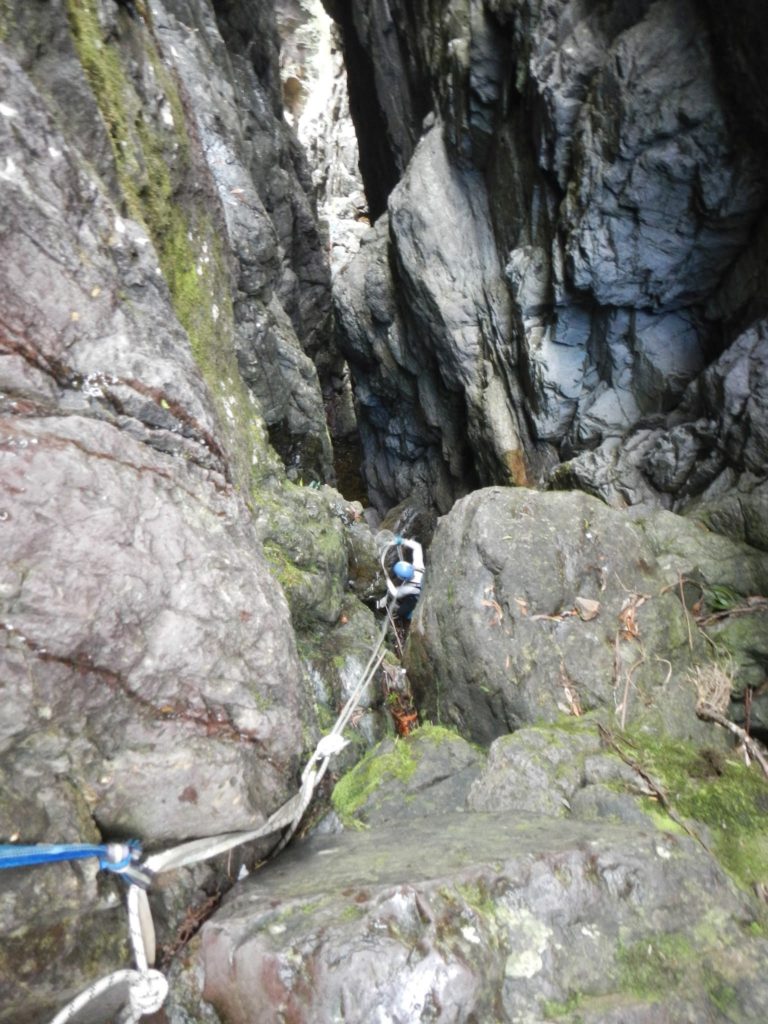 We came across an interesting anchor setup near the end of the slot section: a sling backed up again and again, except all backup points were relying on a single piton! Kosta promptly rearranged the setup to incorporate two additional bolts that were simply not used in the initial setup. 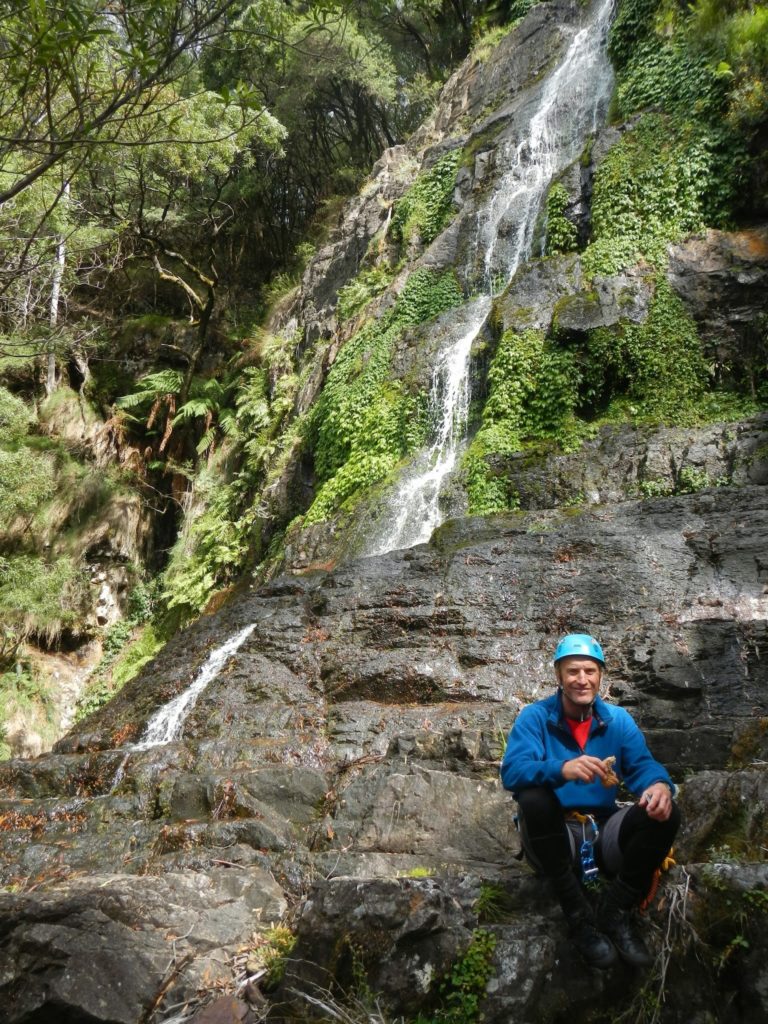 Paul having a short break (Photo by Stephen)

We set off to find a pass up and around, but after a small exposed climb, both decided that this wasn’t going to work. Almost giving up, we took one final look at a middle ledge, which Kosta decided to give a shot. At this point my legs got too shaky, and I bailed, not convinced that I could handle the ledge. Kosta went on, and within 30 minutes he had abseiled down to the anchor, retrieved the rope, and was at the end of the slot with the rest of us for lunch. Kosta’s rope retrieval services had begun! 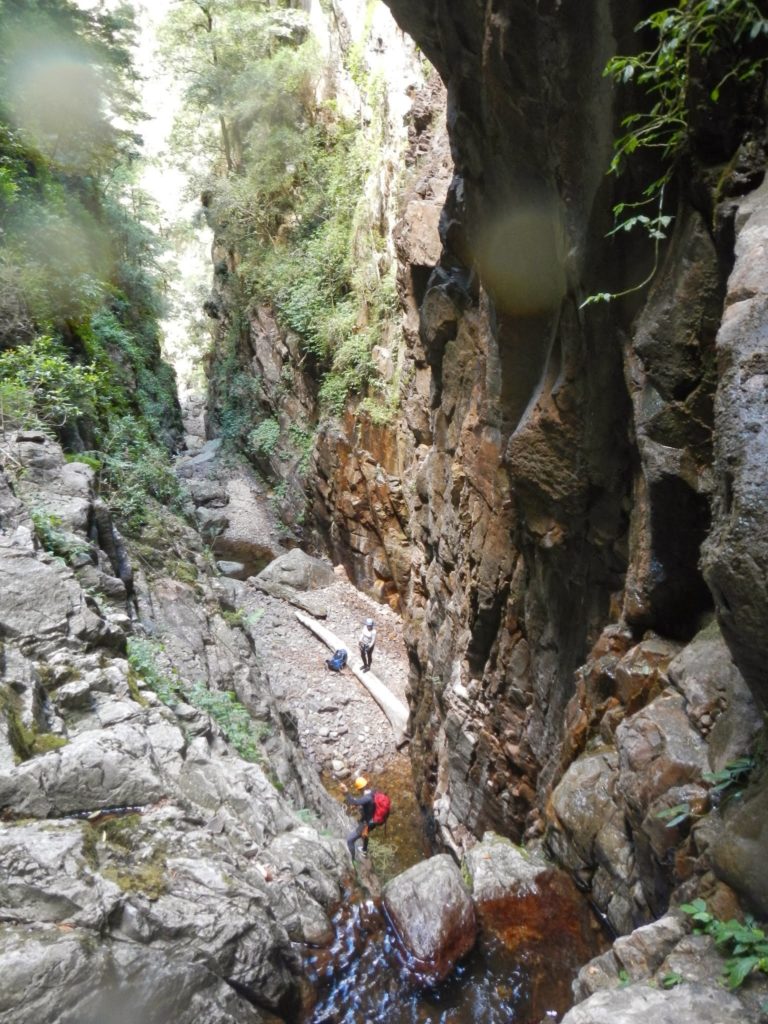 Hanging out at the lunch spot (Photo by Stephen)

After lunch we had one final big abseil, where a previous SUBW group had lost their rope in high water. Josh abseiled down first and to our amazement managed to find the ends of the rope sticking out of the gravel. After a persistent 15 minutes of so of digging, the newish looking 40m rope was retrieved. 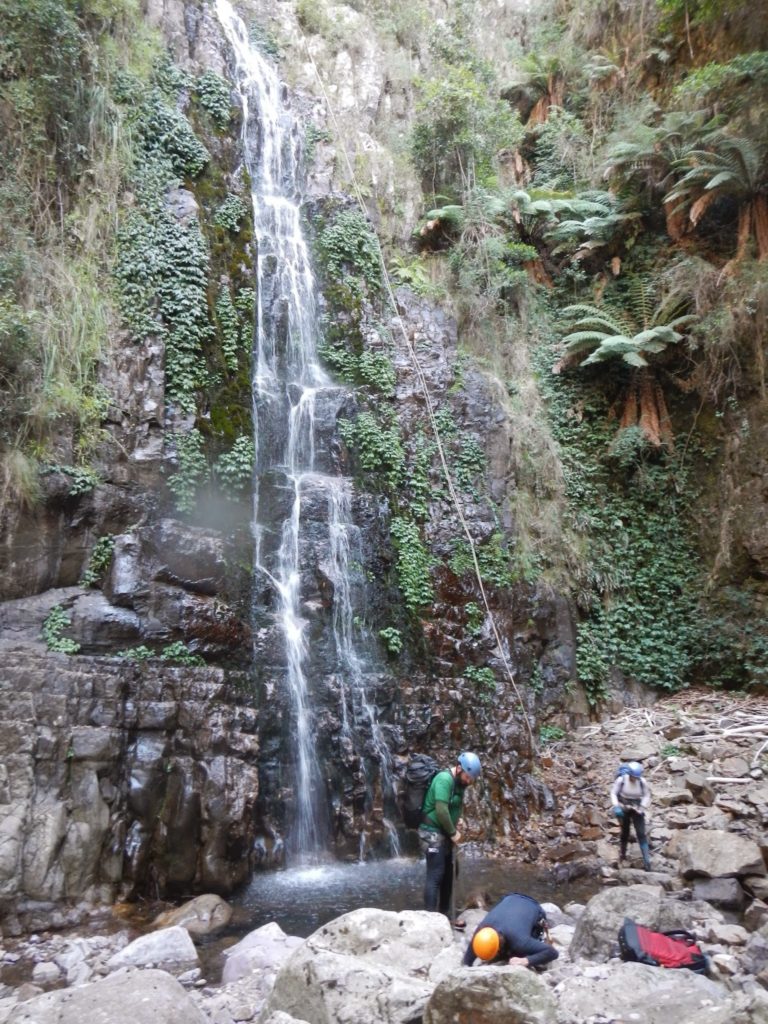 But after all the rope retrievals, it was well into the middle of the afternoon before we hit the large boulder field, and we began the long decent to the Kanagra Creek junction feeling relieved that we were doing the trip over two days.

At the junction we set up camp and enjoyed some wine and cheese by the water. It sprinkled mildly overnight and although none of us had bothered to pitch a fly, we were dry in the morning. Josh was also visited by a wild pig in the night that mistook his handsome physique for a backpack full of food.

The following morning was dry, but slightly grim weather-wise, which turned out to be the perfect conditions for tackling the climb up the spires. We were all feeling the extra weight of the wet ropes and gear from the previous day, and I was feeling so navigationally challenged that I mistook Mt Colong for Mt Solitary… hmmm. 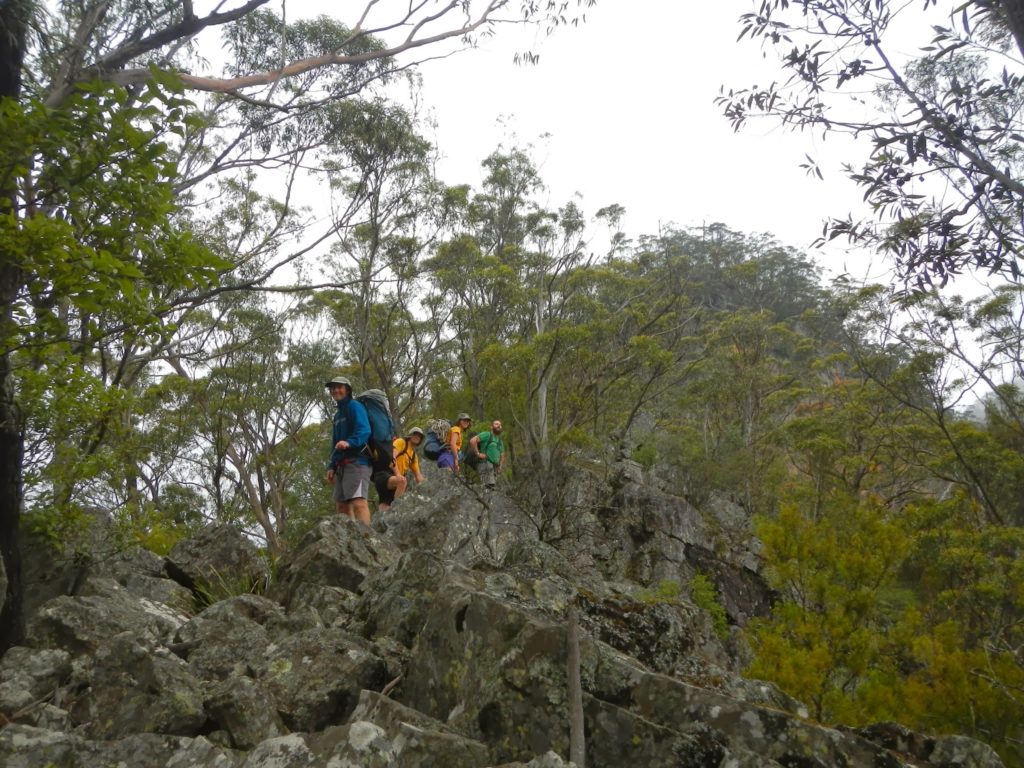 Climbing up the spires (Photo by Stephen) 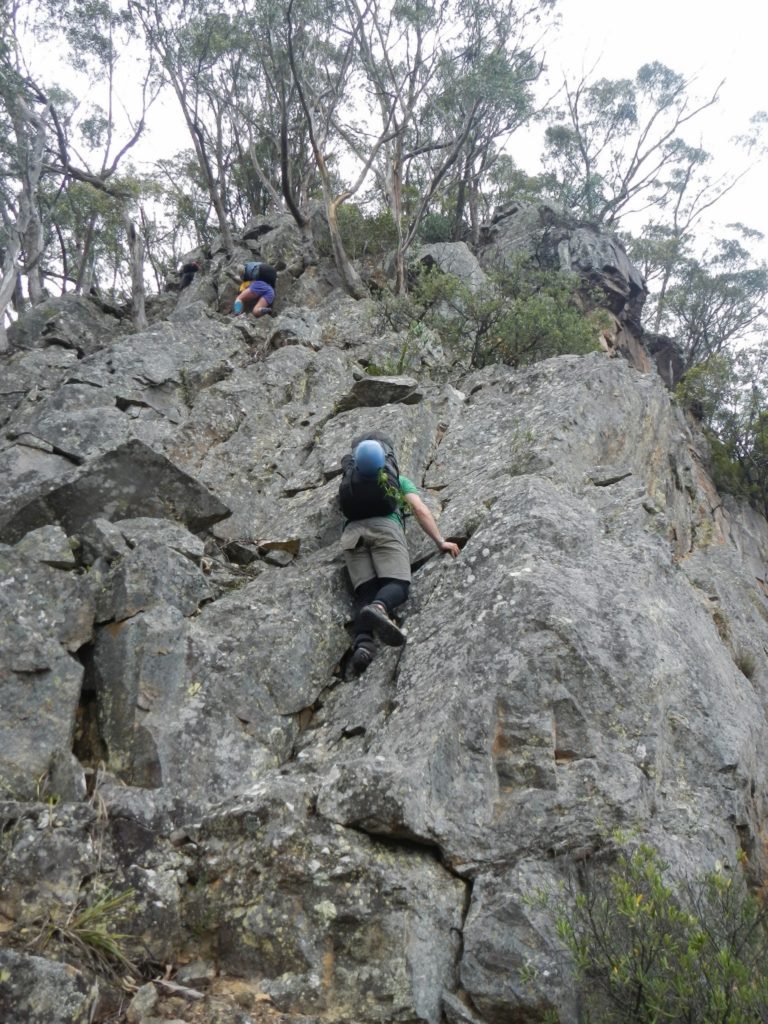 Ascending the spires (Photo by Stephen)

But the views all around were spectacular and worth every step of altitude. There were a few tricky scrambles that required a little bit of care, given that the rock was so loose, but in general we all got up with minimum trouble and only the occasional pack-pass. 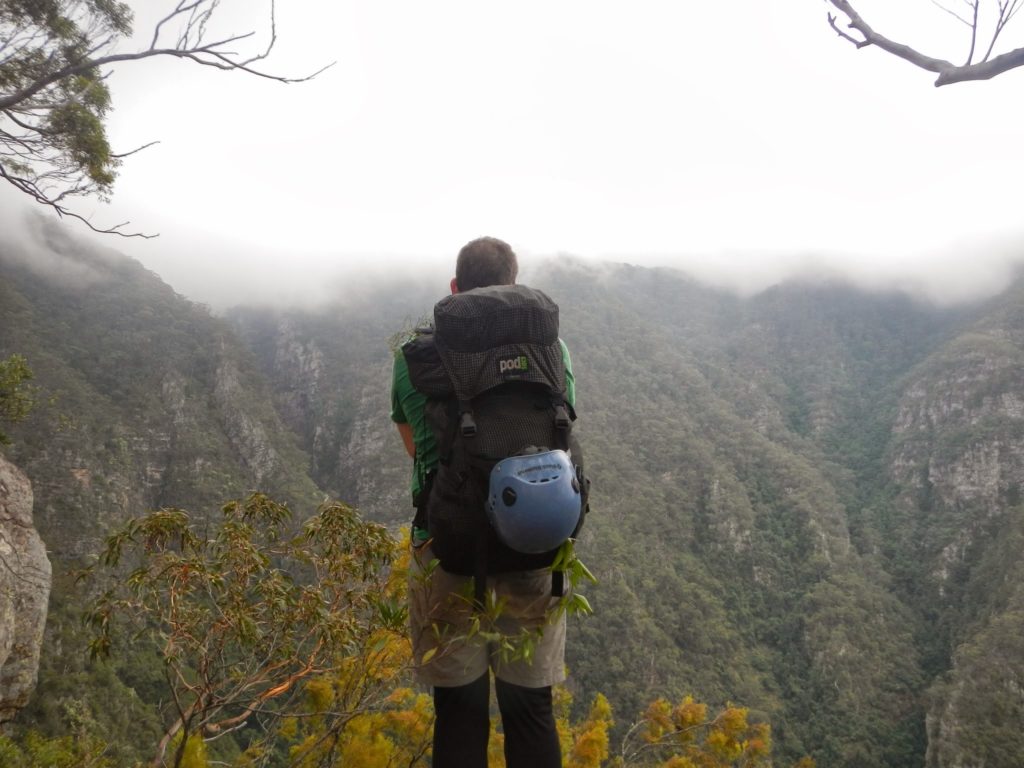 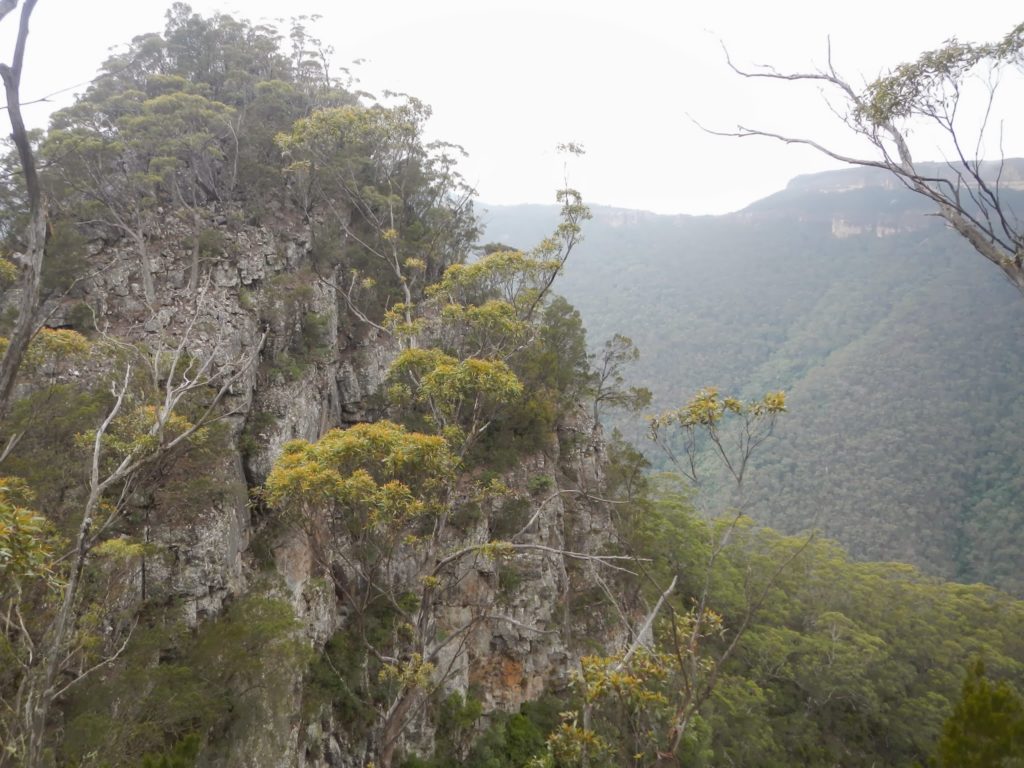 View of a Thurat Spire (Photo by Stephen)

On top we enjoyed a well earned lunch, despite predicting that we’d be sitting in a cafe in Oberon by lunchtime! 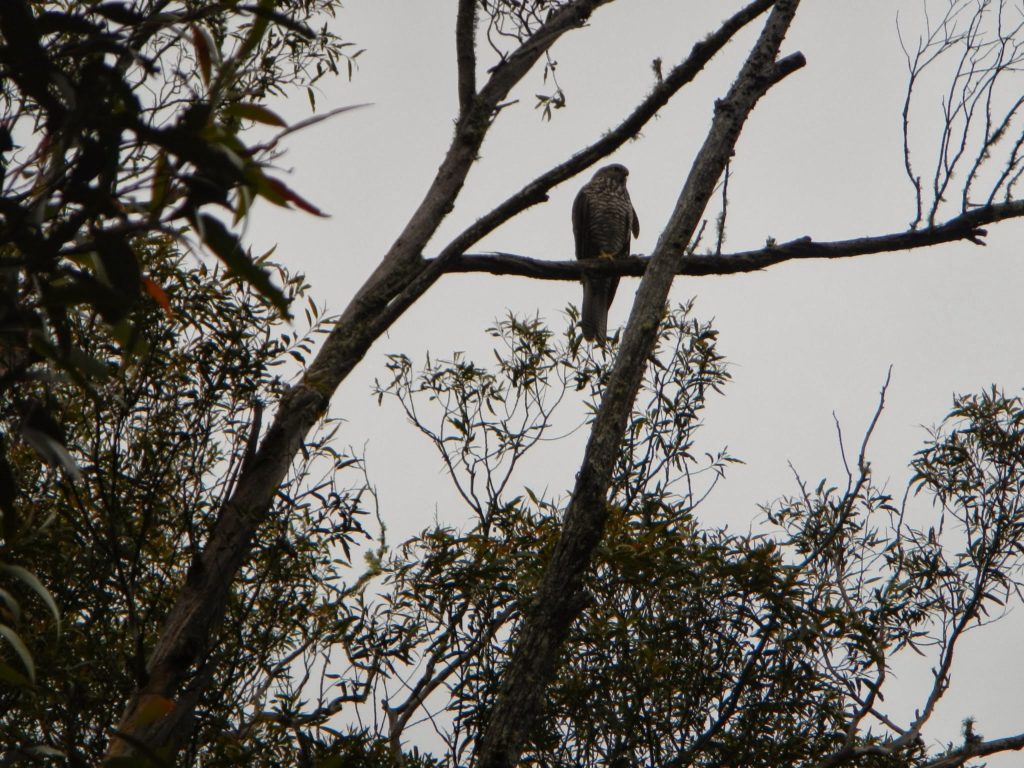 Bird of prey on the spires (juvenile Peregrine Falcon?) (Photo by Stephen)

We made our descent off the first spire and up the second without any abseiling, but used two abseils to get off the second spire. This was slow going due to all the loose rocks, but we made it down with no major injuries (other than one loose rock on Stephen’s neck — sorry Stephen!). 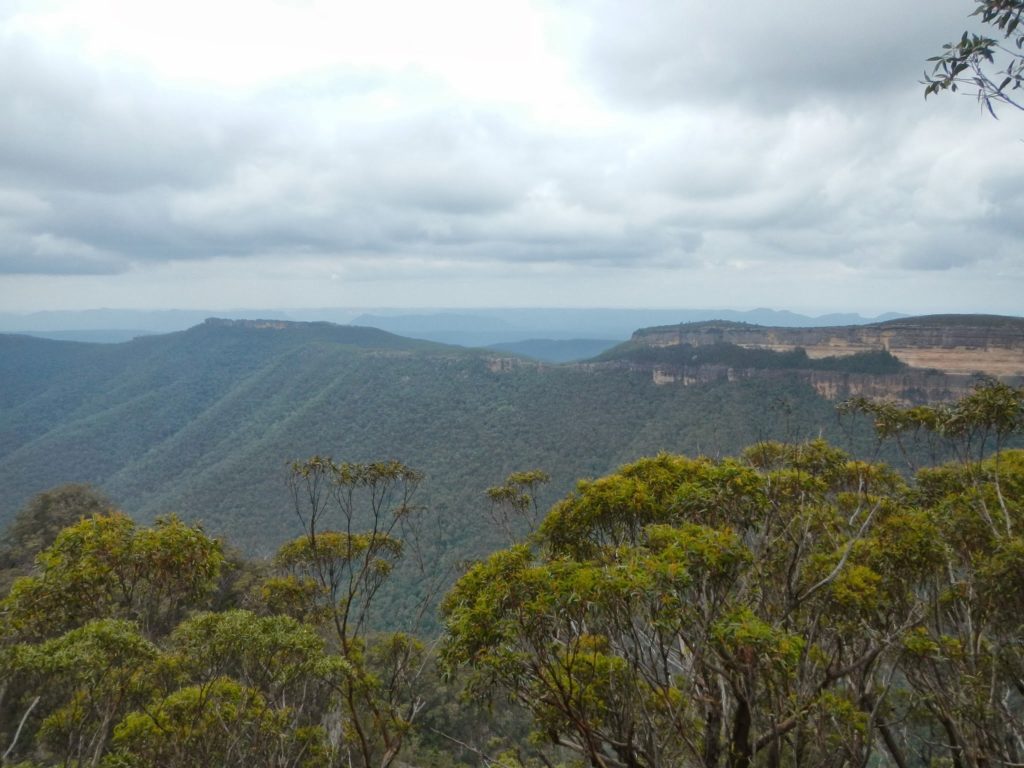 View across to Kanagra Walls (Photo by Stephen)

The final walk out seemed a lot longer than the way in, and we hit more scrub than expected. Luckily we made a slight navigational error that took us to the high point of the fire trail (300m or so too far) and got spectacular views across the southern Blue Mountains.

In summary, a great trip. Thanks to everyone that made it so spectacular! 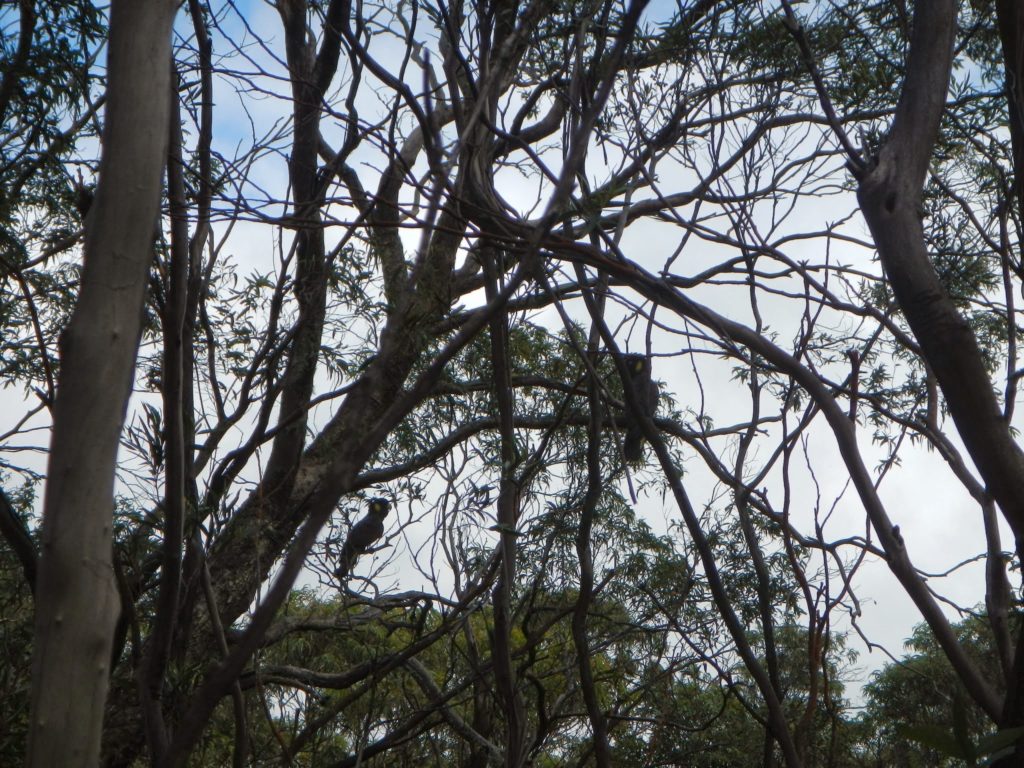