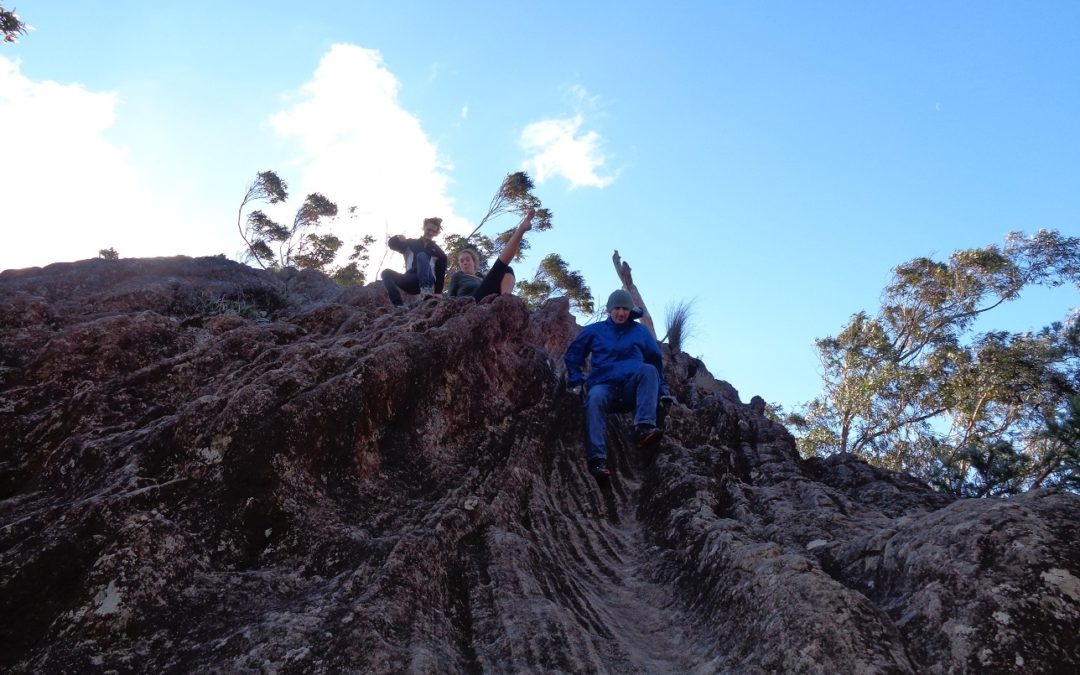 We had one person having to drop out due to an unfinished assignment, but there were no “no-shows”.

After most of us met up at Central Station we set off, collecting Sophie at Strathfield, Conrad at Parramatta, with Andrew and Zachary waiting for us at Katoomba Station.

At Katoomba we were greeted with a crisp clear Blue Mountains day, and after a stop off at the Hatters’ Café for some coffee for some (and thus helping the local economy), we did the road bash to Echo Point. There were hordes of tourists there,but that didn’t detract from the view. For Eliza it was a revelation, as the only other time she had been to Echo Point the view was completely obscured by mist. Then it was off down the Giant Stairway underneath the Three Sisters, with its 900+ steps, including a couple of very steep steps suspended over a 40 metre drop.

At the bottom we then headed off along Dardanelles Pass which joins Federal Pass which then arrives at the bottom of Furber’s Steps. From there is was a short distance to the tourist-filled Scenic Railway and the old coal mine entrances (complete with recorded mining noises). After weaving through the tourists we then set off along the second section of Federal Pass – poorly signposted at the tourist-mine site (they clearly don’t want tourists going that way!) – which immediately became rather rougher. At the Landslide it was quite rough, and it was no surprise that we saw only a couple of other walkers in this section. It was also extremely windy here, and we had to hold onto hats, glasses etc. One of the photos shows an abseil rope hanging off the Landslide being blown at quite an angle.

Anyway, after leaving the Landslide the track became somewhat more level and straight, as from there on it is the old coal tramway formation out to Ruined Castle. Along this track we stopped to look at the entrance to the Mount Rennie Tunnel, which formed a branch of the coal tramway passing under Narrowneck. Eliza wondered it it could be a short cut, but when I explained that there is water in it thigh-deep which will stain your skin rust-Orange for a week afterwards, and it was pitch-black inside, the notion of exploring it was cast aside for now (maybe for a hot summer’s day later in then year?). One thing that was noticed was the wind coming through the tunnel from the strong wind on the other side of Narrowneck; no problems with ventilation this day! As time was getting on, it was decided to pick a sunny spot along the track not far from the base of the Golden Stairs, rather than go on to have lunch on Ruined Castle.

After lunch, which included a discussion of the pros and cons of leeches (and guess what – Eliza has never encountered one!), we set off along the track to the branch track to the top of Ruined Castle. The track on this section is so smooth that Eliza did it in bare feet. On Ruined Castle we we nearly blown off by the strength of the wind, but that didn’t stop Sam, Conrad and Eliza (still in bare feet BTW) climbing the rock which provides splendid views of the Southern Blue Mountains. (It was just as well we didn’t have lunch there as the very strong wind would have been a challenge). So then we retraced our steps to the base of Golden Stairs. Although not as steep a Furber’s or the Giant Stairway (it has a flat section and even goes down briefly at one point) it is still a challenge as is is somewhat rougher than the other two (albeit undergoing renovation). For Frances it was a “baptism of climb” but she eventually got to the top OK. We admired the setting sun over the Megalong Valley and out to Hampton, as we set off on the road-bash along Glenraphel Drive, Narrowneck. At Cliff Drive we turned left instead of right to get to Oak St then right into Cedar St and Violet St to get to Scenic World; this shortcut cuts off almost a kilometre of walking – worth remembering.

On arrival at Scenic World (which also provided a welcome toilet stop for a few people) I found that there was a bus back to Katoomba Station departing in 10 minutes (at 5.05pm). A quick calculation worked out that by walking back to Katoomba we were likely to miss the 5.26pm train back, and there was an hour wait for the next one. It didn’t take much convincing for everyone to pay the $2-30 fare on the bus so as to avoid twiddling our thumbs on a freezing Katoomba Station for almost an hour. As it was the bus got to the station with only 5 minutes to spare, no thanks to some fool double parking in a disabled spot at Echo Point, blocking the bus’s turning circle. So it was back to Sydney which we got to a bit after 7pm.

It was an enjoyable day with great weather – even if a bit windy.
And yes, once the warm weather returns, look out for a walk going through Mt Rennie Tunnel.
And also look out for the forthcoming “Wicked Witch Walk” on June 22 (a Saturday) on midwinter’s day at Katoomba.
And May the Fourth BWY? May the Fourth Be With You, of course!