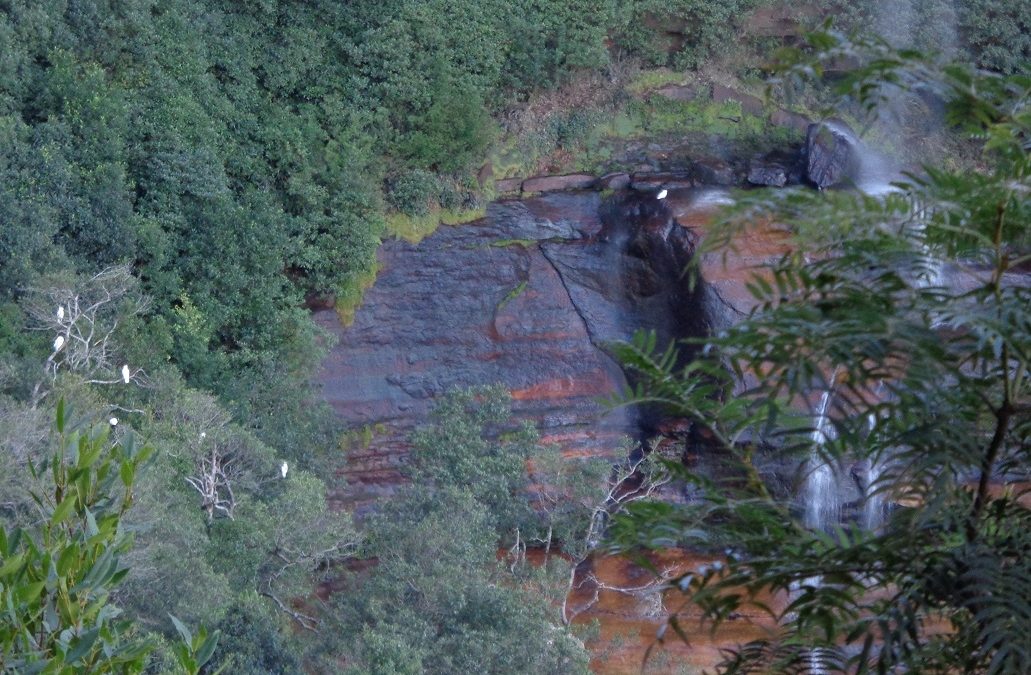 It promised to be an interesting trip communication-wise when, after having sent several emails to participants over the prior week about trains, I had a call on friday night from A Certain Person who asked me what time train we had to catch. When I asked him had he read my emails, he said “ummm, no”. (He ended up pulling out anyway). Then on the saturday morning of the walk, my phone company’s mobile system apparently went down as I wasn’t getting any SMS’s through that people were sending me. (It wasn’t until I reached Hornsby on the way home that a load of messages sent in the morning suddenly appeared).

As I left home a bright clear day promised, with Venus shining brightly in the pre-dawn sky on this the shortest day of the year. And the weather did indeed stay fine almost all day, as the photos will show. Anyway, 4 of us (Myself, Ali, Dominique and Derek) met up on the platform at 8am for the 8.18am train, although we delayed entering the train until only a few minutes before departure waiting for a couple of people who just didn’t show up. So we only just managed to get 4 seats together. So we set off, noting the Bat colony at Clyde which appears to get larger every time I see it. Conrad got on at Parramatta by which time it was standing room only. As the train started picking up passengers (or “customers” as Gladys B calls them), heading for the Midwinter Festival at Katoomba, the train got very packed, and Martin couldn’t get on at Wentworth Falls so drove to Leura instead. Clearly NSW Trains had underestimated the popularity of the Midwinter Festival.

At Leura, Martin, Cathie, Catherine, Jiri and Jayden were waiting for us. So we set off down Leura’s main street then to the Memorial Gates which leads to the track to Lyrebird Dell. This pleased Catherine who had wanted to walk this Dell for a while. Then down to the Pool of Siloam, where we couldn’t find any Yabbies, and then up the long flight of steps to the Gordon Falls picnic area, and then to the Lookout there. At the lookout it was so clear that it was possible to see Mt Gibraltar at Bowral in the far distance. Then we continued along the Cliff Walk until reaching the detour around an old concrete bridge which has been awaiting repair for the past 12 months – with nothing much appearing to happen (no money, NPWS?). After doing the detour, which passes by the house of the parents of a Famous Bushwalker, we regained the track and reached the path down Leura Cascades, which we followed. The track through the Cascades goes via a pretty fern-lined gully with a Grotto at one point (see photo). Then it was down to the bottom of Leura Falls via a couple of steel ladders, the via Federal Pass to Leura Forest where we had lunch. While there we noticed small brown birds hanging round which appeared to be Bellbirds. After lunch we set off along the Dardanelles Pass (which is not well signposted at Leura Forest so could be easily missed). Eventually we reached the base of the Giant Stairway and we considered going up it as it would shorten the walk a bit. The Giant Stairway is th3e steepest steps of the whole Blue Mountains, however, and we decided to stick to the original plan to go up Furber’s Steps which are shorter and less steep.So, on we went to the base of Furber’s and up we went. I’m happy to say that Cathie and Dominique who had had some misgivings about the climb up, passed with flying colours! On the way we passed Katoomba Falls and noted a flock of White Cockatoos next to the Falls. We passed by “Witches Leap” (appropriate for the day) and then to the top which is not far from Scenic World. Then it was a road bash to the main street of Katoomba where the Mid-Winter Festival was in full swing. A Wizard kindly posed for a photo (although his witch wife wasn’t so keen), and we stopped for coffee at a stall that a friend of mine was running. Jiri, Catherine and Jayden stayed round to take in the sights, and the rest of us headed off to Katoomba Station for the train, and just as it pulled in a very fine rain started, which was probably melted snow. Cathie & Martin got off at Leura and I finished my trip at Strathfield Station for my Central Coast train home.

It was an enjoyable walk, appreciated by all including 6 months old Jayden, in very crisp clear Mountain weather. Not so happy though about the 3 “no-shows”. And also there is a lesson there that sometimes phones and software can go down, so always remember to check for train platforms and departures by the old-fashioned way – the train indicators at the station!