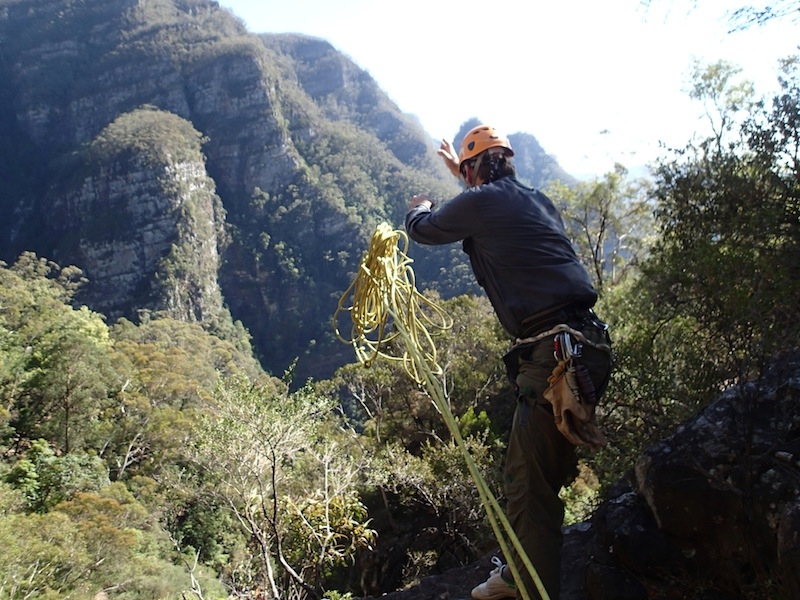 It had been almost four years since I’d visited Kalang Falls. On that occasion drizzling rain and a light blanket of mist had obliterated the impressive views that the canyon is known for. The conditions had also made the infamously slippery rock even more treacherous than usual, and had worked the leeches of Murdering Gully to a frenzy, leaving a very distinct memory of the challenges involved.

We’d only decided on a canyon a few days before this trip, and with most of the Blue Mountains still closed following recent fires, along with a forecast of wet weather, an easier, dry, accessible canyon seemed the way to go. 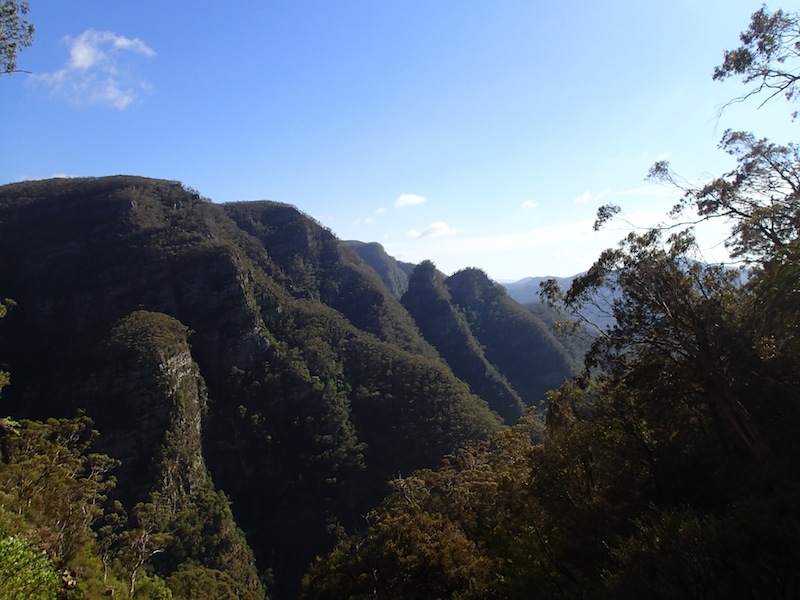 The Bureau of Meteorology was predicting showers with the chance of thunder storms, which isn’t great canyoning weather, but the far more reliable Norwegian weather service was predicting rain on Friday night, a mostly sunny Saturday, then a return of the rain that night.

I’d been overwhelmed by the accuracy of this service on other recent trips, so decided to brave it, figuring in the worst case scenario we could at least blame the Scandinavians for any tragedy that befell us. 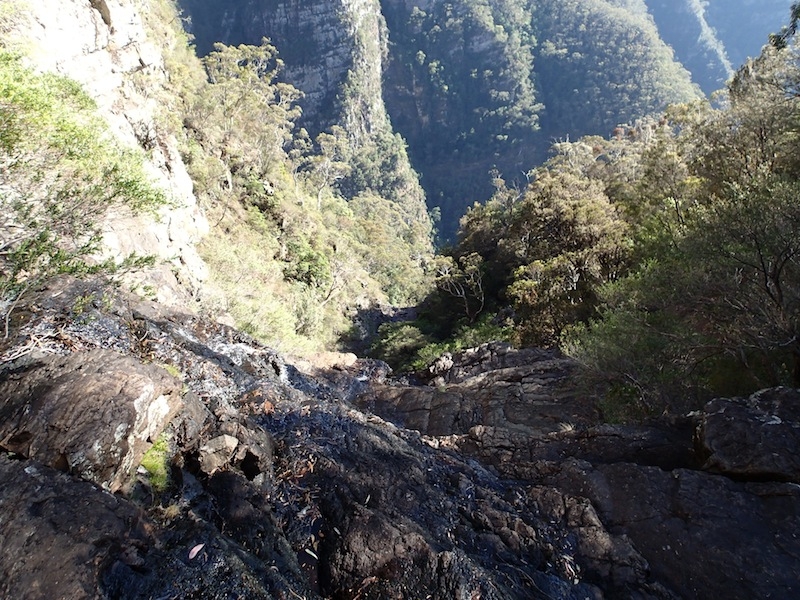 Looking down as the canyon plunges into the gorge below

As Tony and I drove out late on Friday night the predicted rain started to come down. Near Hampton it became heavier, convincing me the detour around Jenolan Caves was the safest option.

Once we hit the dirt road, out came the wildlife. I had to jump on the breaks several times — sliding on the muddy surface — while wombats and wallabies darted in front of us. 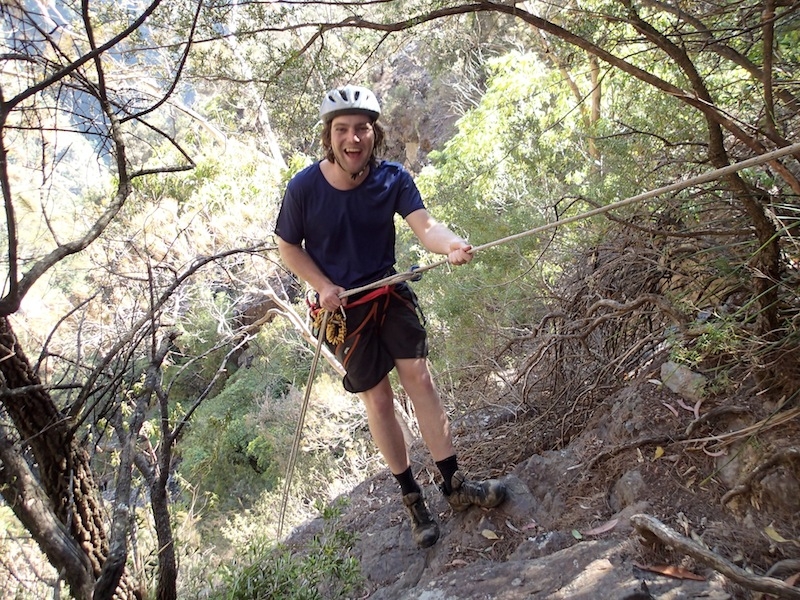 Tom seems to have forgotten something…

At one point the skid continued too long, with a wombat passing directly under the middle of the car with several thuds. I turned around, dreading the thought of having to put down an injured animal, but thankfully the headlights showed the nuggety creature scurrying off into the undergrowth.

When we finally reached the Kanangra Walls car park the rain was still falling, driven by gusts of chilly wind. Our original plan was to bed down in Dance Floor Cave, but I didn’t feel like a ten minute walk in the wet. Instead we set up on the tables under the nearby shelter — the only spots still dry. 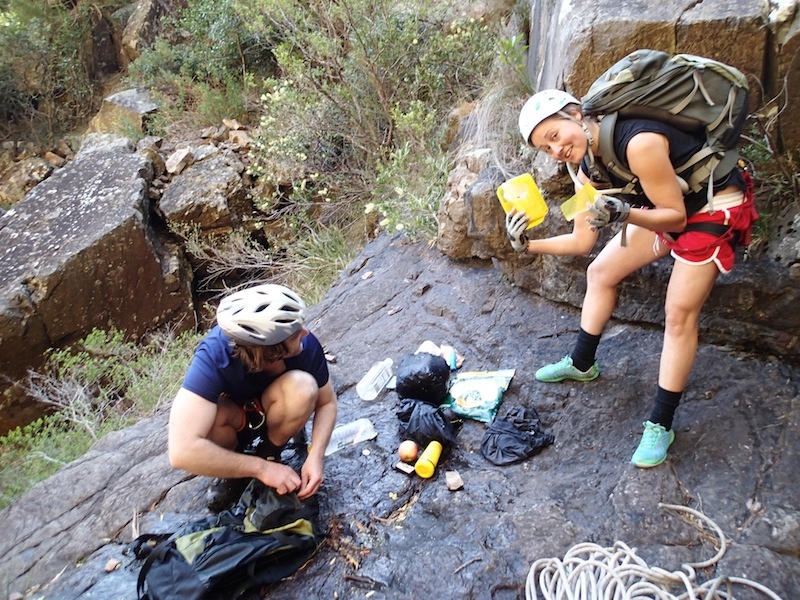 By the time we’d set up the rain had stopped, and thankfully it moved on completely through the night.

We woke to almost clear blue skies and sunshine streaming down. Looking around, we still didn’t have the final two members of our group, so I figured we weren’t in any rush to get moving.

As we snoozed, a convoy of vehicles pulled in. Being one of only half a dozen canyons open, I’d expected we might see some crowds, so it was no surprise when we chatted to the party of eight and found they were a group from the Sydney Bushwalkers planning a trip down Kanangra Main. Having a much bigger day ahead of them than us, they moved off.

Tony tossing the rope at the top of our second abseil

Once we’d finished breakfast and packed our gear I started to get a little worried about the missing members of our group. Not only had they been planning to drive out in the middle of the night — so there was a chance they’d crashed on the slippery winding roads — but they had one of the ropes we needed, meaning if they didn’t show, we couldn’t go!

We were relieved when they pulled in, finding out they’d literally collapsed on the side of the road to sleep, too tired to make the final push to the Walls until morning. 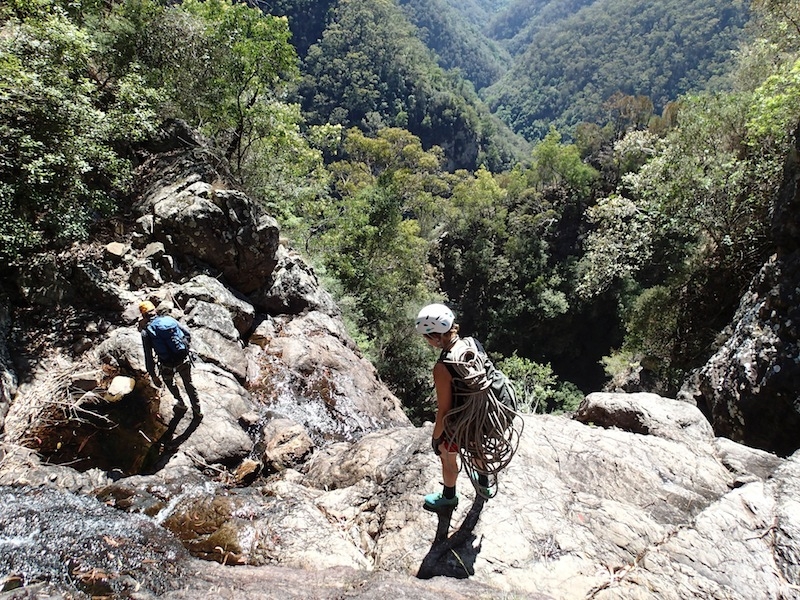 Tony and Kate scrambling across to the next anchor

Some final faffing with gear and we were on our way, down possibly the simplest canyon walk-in anywhere in the Blue Mountains. We paused at the lookout, admiring the Walls in the morning light, then continued down the tourist track towards Kalang Falls. Near the bottom we detoured down the well-worn footpad, and within moments we were scrambling down the creek towards our first abseil.

We avoided a first, option abseil, instead climbing down some easy drops to get to the top of a more impressive waterfall. 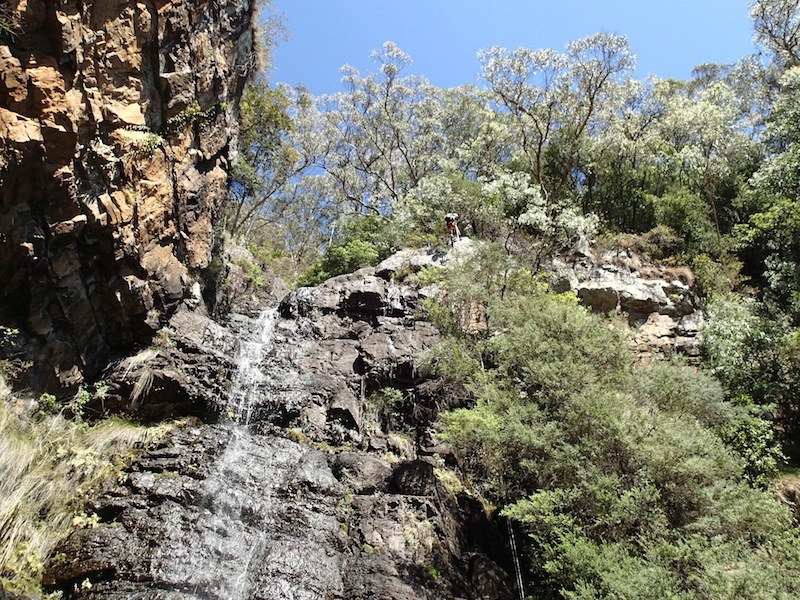 Kalang has lots of big, dry abseils next to waterfalls

As we stood around, putting on our harnesses, Tom’s pack managed to overbalance, tumbling almost in slow motion over the edge. It hit the ground with a sickening thud, followed by a series of slides, skids and bounces that eventually saw it come to rest almost 50 metres below us in a small pool.

Thankfully Tom had all his abseiling gear with him, but as he headed off down the rope pack-less he was looking rather sheepish.

The pack was in one piece, and other than a shattered jar of mustard, a busted lunch box, and an exploded avocado, not too much damage had been done. 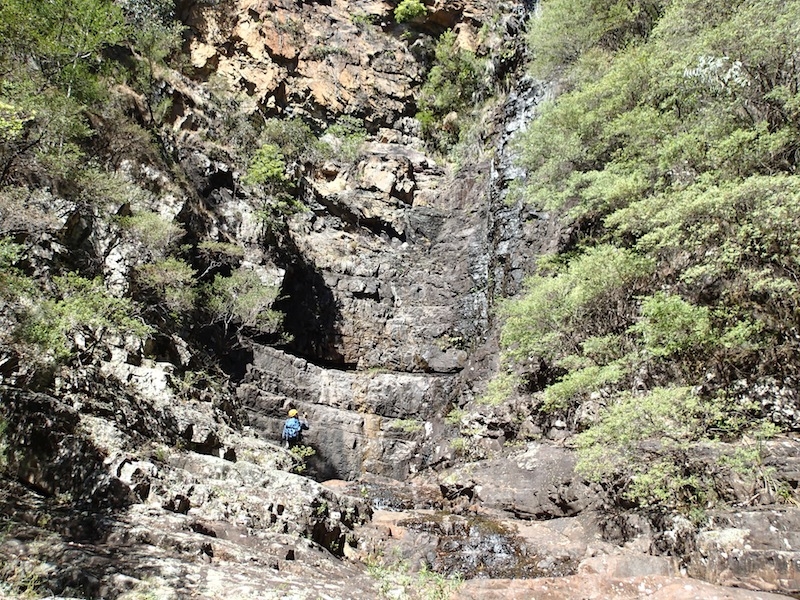 Tony examining the base of a waterfall

The abseils came rapid fire after that. There was rarely more than 50 metres of walking between drops, and despite the rain the night before the rock was all bone dry, making it far simpler than I recalled.

I hadn’t paid much attention to the track notes, so the abseil lengths had to be guessed by sight. Mostly we nailed them, with two or three drops ending pretty much exactly where the rope ran out. There were a couple where the first person down had their prussiks handy, just in case we needed to add a second strand! 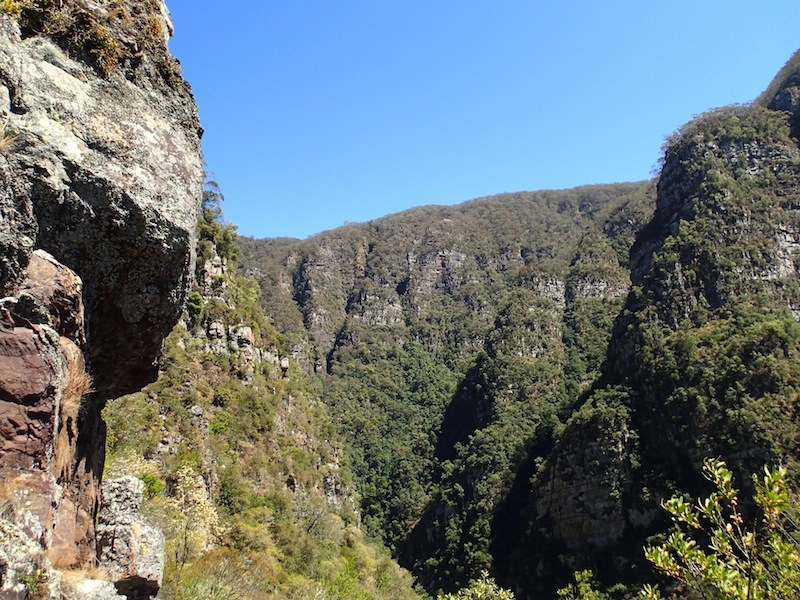 We made a detour at one point onto a rocky ridge between Kalang and Kanangra Main, admiring the view up the impressive gorge.

Thanks to the small, experienced group, and the fact that we were carrying more than the bare minimum of rope, we made great time through the canyon. When we finally hit the creek junction that marks the exit we realised it was only just after midday, so we’d completed the canyon in under four hours. 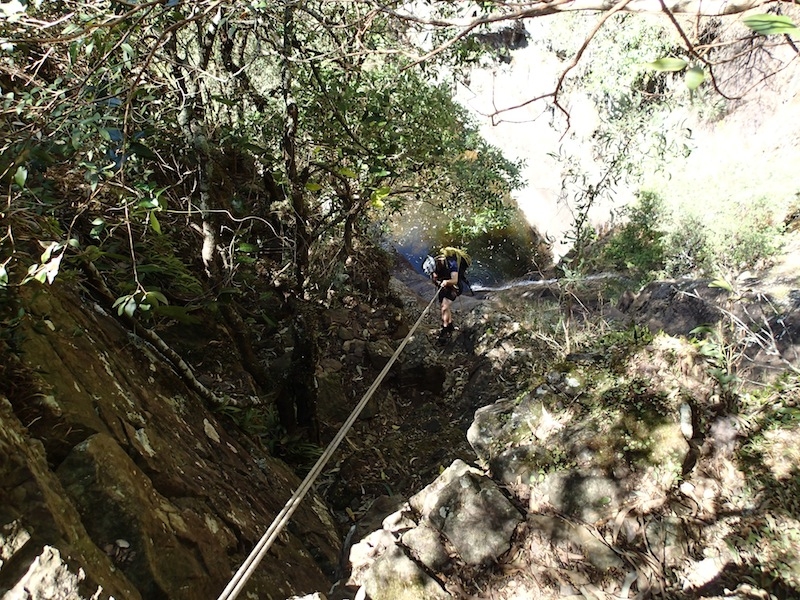 The quick time meant we could relax and enjoy the stunning weather. We had a long lunch, cooled off in a shallow pool, and sunned ourselves on some rock slabs.

Finally it was time to move on. We’d decided to skip the usual exit up Murdering Gully, and instead follow the ridge I’d been shown last summer. While it’s shorter and leech-free, this route is quite steep, and is littered with precarious loose rock. Kate decided she’d head off first, partly so she could set a relaxed pace, but more likely to avoid being the victim of a careless rock-kicker. 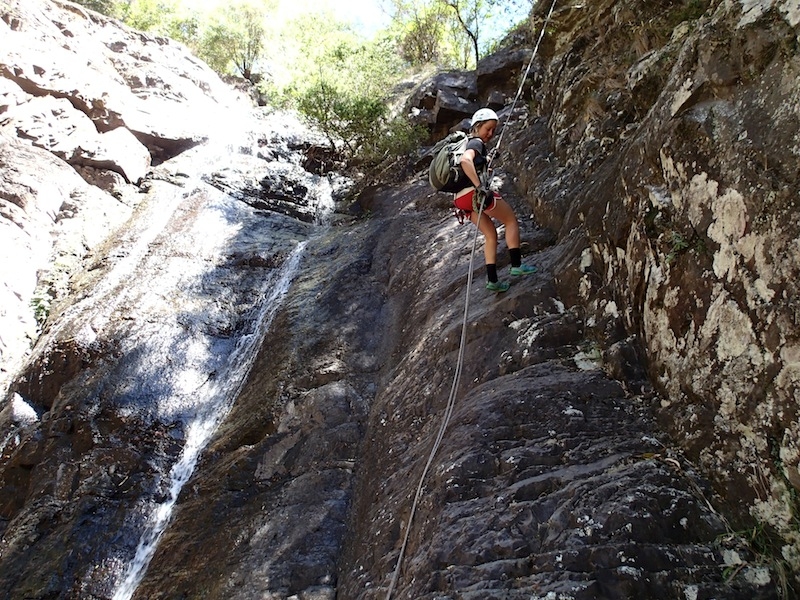 Kate abseiling beside another waterfall

Soon enough we all followed. Tony raced ahead and was quickly out of sight. Tom and I took turns at the rear, with him blaming a return of childhood asthma and me complaining of old age and obesity as we huffed and puffed up the slope.

The other thing this exit has going for it is the views. There were plenty of spots to pause for a breather, admiring Thurat Spires or Kanangra Walls towering overhead. 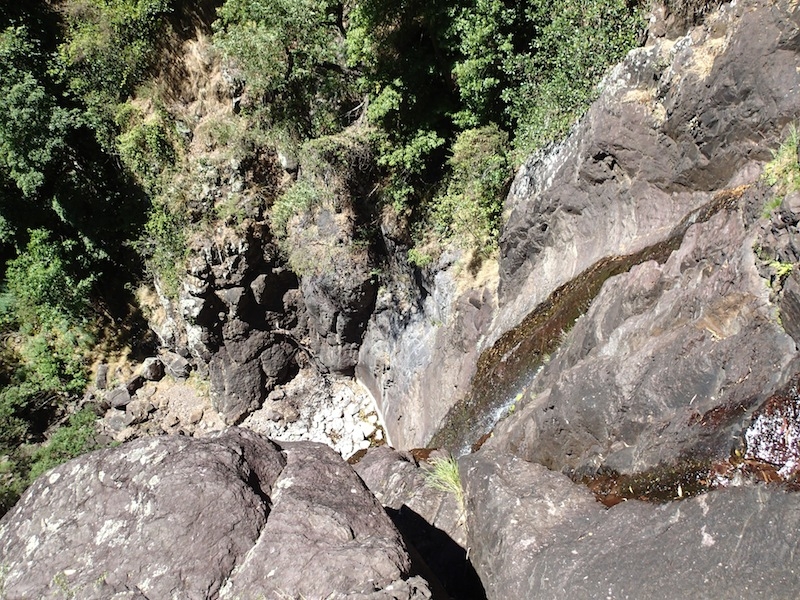 The halfway ledge on the longest abseil in Kalang Falls

Before too long we were at the top, and after dumping packs we made it the short way back to the lookout where we sat back and enjoyed the iconic views for a while longer.

The drive home was slightly less eventful than the way in, although some finely-balanced fuel management had me doing a large part of the drive with the fuel light on, finally reaching a servo stocking LPG with my car indicating it had just six kilometres worth of gas left. 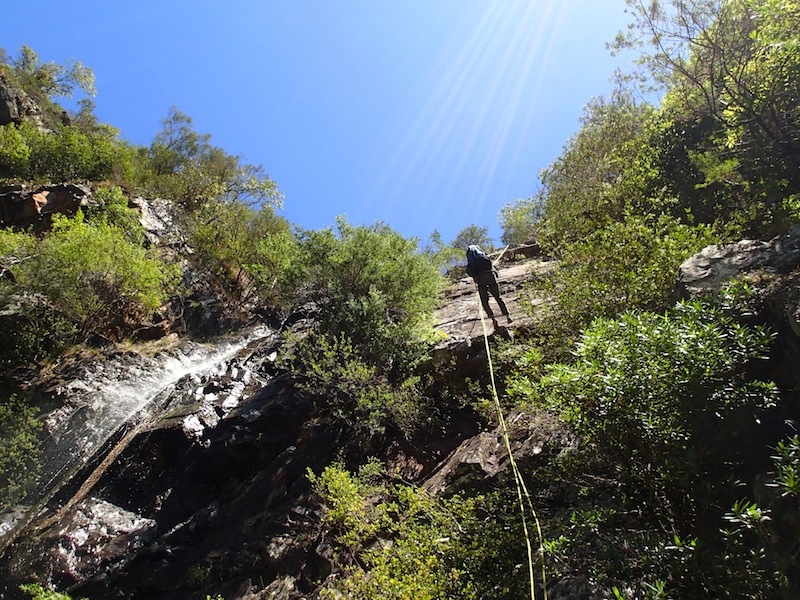 Tony on the top part of the long, 60m abseil

We reconvened at the Station Bar for what has become a traditional woodfired pizza and celebratory beer before making the final push home.

As we entered the pub, the sky was still clear, but on exiting, thick clouds had rolled over. As we drove down the mountains it began to rain — exactly as the Norwegians had predicted — and thankfully once it no longer mattered to our trip. 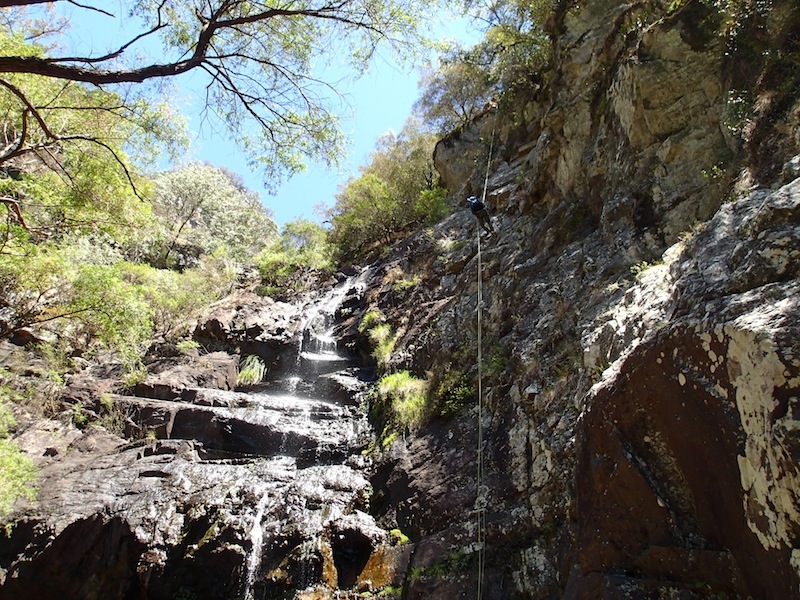 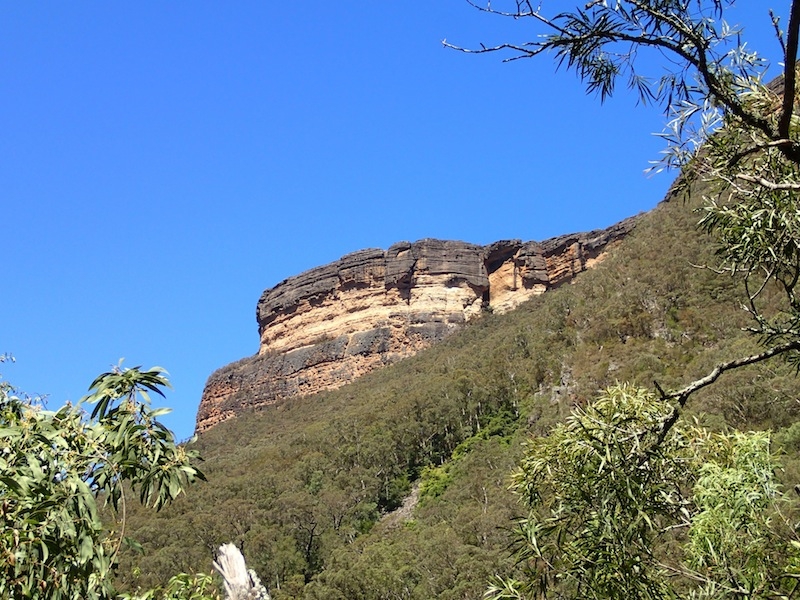 Part of Kanangra Walls from our exit ridge