Alfred and I made our way out to Kanangra walls late on New Years Eve, armed with plenty of food and booze, and the grand plan to do Kanangra Main followed by a two day effort in Davies. From the lookout we managed to spot a smattering of tiny fireworks exploding more than 100 kilometres away, before making our way down to Dance Floor cave where some wine was drunk, tales told and the new year ushered in.

The next morning we packed up early, heading to the car park where we met up with Bruce for Kanangra Main. Having never met, there was plenty of interesting conversation as we wound our way through the low heath and thicker sections of scrub to the start of the canyon, pausing only briefly to admire the distant views. Once down in the creek we quickly reached the first, spectacular abseil, where three pitches take you close to 150 meters down the side of an impressive waterfall.

I won’t go into too much detail, but needless to say it is a spectacular area with towering cliffs, impressive abseils and great views down the valley. The walk out, via the aptly named Murdering Gully, left me pretty well spent, especially after I was attacked by more than 20 leeches.

That night we bid Bruce fairwell, returned to Dance Floor, enjoyed a lovely fire and got into the booze with a great deal of gusto. In between all the merriment we also discovered two tiny scorpions only a couple metres from where I was sitting (and planning to sleep). I didn’t even know we had scorpions in the Blue Mountains, but a quick search on my return to civilisation confirmed it.

I don’t know if it was the long day, the fact that I am terribly out of shape, dehydration or a hangover, but I woke up feeling rotten. We packed up, headed to the car and drove to the start of the fire trail that leads to Davies Canyon.

Jonathan was running a little late, and we were starting to worry he wasn’t coming when his car pulled in. As we reorganised gear, I finally decided that it was mad to do a long tough canyon in my state, which included some pretty severe back pain, so I told the other two they would have to go on without me. I helped them finish off their packing, then walked with them the 45 mins to the end of the fire trail. It is a lovely little road, winding between towering gums in an open forest that eventually becomes a short, compact form of scrub.

As I waved them on their way and turned back, my new plan was to spend a day resting, then head off for a solo Kanangra to Katoomba (K to K) trek, leaving my excess gear in Alfred’s car. My slow strolling through the bush, as I enjoyed the introspective solitude, was suddenly broken when a heavy downpour came from nowhere. I picked up the pace, pushing on back to the cars desperately hoping the rain would ease off. It didn’t, and I jumped into Alfred’s car looking very much the drowned bush rat.

Driving back to the walls, I decided to make a pot of tea and have something to eat in the shelter while I waited for the rain to stop. Eventually it paused long enough for me to grab some essentials and head down to Dance Floor again where I planned to spend a cosy afternoon reading.

The rain continued to come and go as banks of clouds rolled over, and occasionally my peace would be broken by a couple walkers looking for shelter.

At about 2.30, as I was particularly engrossed, Alfred and Jonathan suddenly wandered in. It seems the deteriorating whether, poor visibility, tough navigation, steep scree slopes and wet rocks had convinced them that it would be wise to pull out also, leaving it for another time.

To rub salt into the wound the weather cleared up mid-afternoon, with the only sun shine experienced all weekend poking through for a couple hours of brilliance. We used the opportunity presented by the clearing clouds to explore the high plateau and scramble along some interesting cliff ledges. On one, which had run out and forced me to turn back, a friendly brown snake decided to appear from behind some tufts of grass, forcing me to do a dodgy bouldering attempt to climb back over to freedom.

Another evening of wine-lubricated discussion around the camp fire was had, with the added benefit of a third person who came complete with a new repertoire of tall tales. 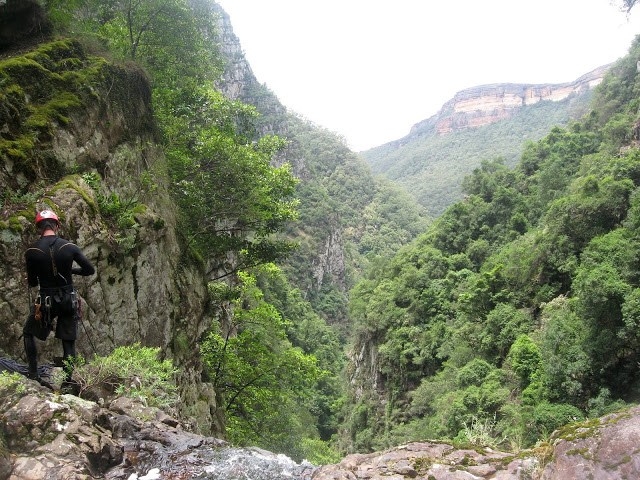 The next morning was a late start, with mist and rain having moved in again overnight making for a sleep in and slow start. Thankfully the new plan for the day was a shorter effort down Kalang. We eventually packed up and headed back to the cars.

The weather gave the area an incredible greenness and the creek was running very well due to the recent rain. The downsides of course were that we missed out on the incredible views for which the canyon is known, the jagged angled rocks were even slipperier than usual and the constant light drizzle got a little tedious.

Like Kanangra Main, Kalang is an abseil-fest, with heaps of long pitches beside some stunning waterfalls. Also in common is the long decent and long slog back up Murdering Gully where the leeches seemed to have used the two days to double in numbers, with one little one even having a go through the thin tender skin of a popped blister on my hand.

Back at the cars Alfred discovered that his gaiters had provided a cosy home for a pair of the biggest leeches ever discovered, who after being burnt off and squashed underfoot — causing a gruesome blood explosion — still refused to die and were spotted sliding away half an hour later.

Two cracking canyons, my first around Kanangra, and inspiration to get back soon to go through Davies.