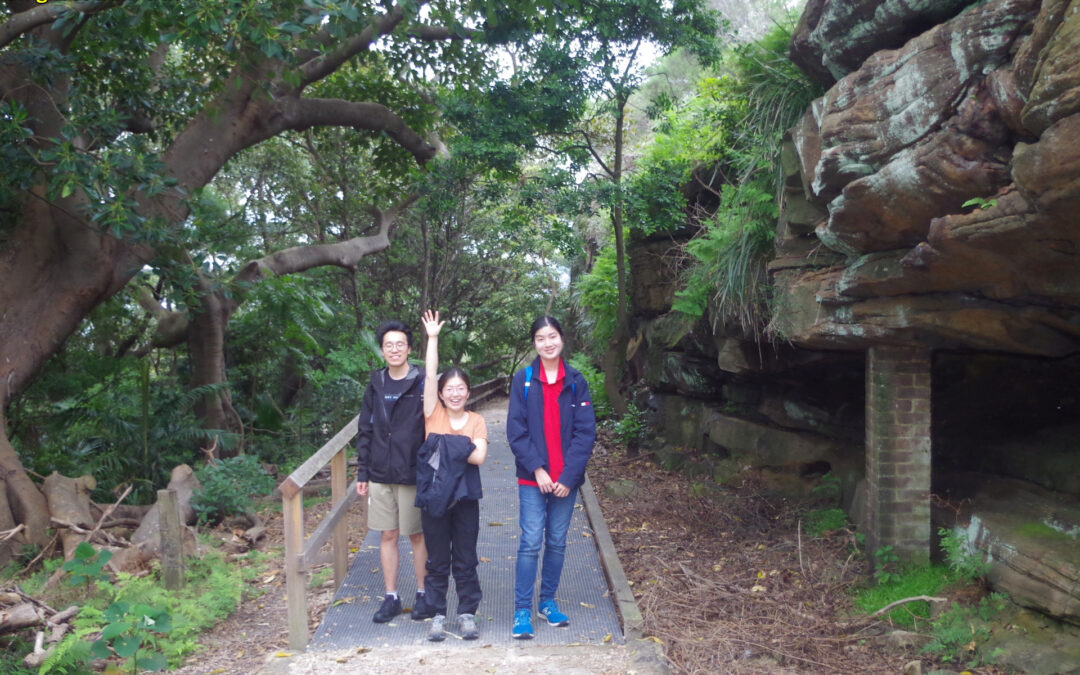 Another lucky break with the weather on my walks, again! Although showers and a possible thunderstorm were forecast for the afternoon, they didn’t eventuate until about 9pm, by which time evryone was on their way home. Also, because of the forecast, the walk was cut short to start from Macquarie Lighthoues at 5.30pm, then further back to start at Watson’s Bay at the same time. This made the walk a rather short 2 hours, but we didn’t miss much by starting there.

So we assembled at the band rotunda in Robertson Park and then set out for The Gap, where we met Julia who had been on the next bus. After a photostop at the anchor of the SS Dunbar (wrecked there in 1857), we set off up the hill along the path which more or less follows the cliff edge. Along this path there are a couple of the bases of old gun emplacements, of which there are several in the general South Head area. Further along, the path comes to a junction with another path going downhill to Watson’s Bay. We turned down that, but only a dozen metres on there is another dirt track branching off to the right. This is the track which followed the former Watson’s Bay tramline down the hill until the galahs and drongos of the then NSW government closed all Sydney’s first tram lines in 1961 (this line was the third last to go in July 1960). The group of overseas students didn’t know what galahs and drongos are. A Drongo is (a) a native bird https://australian.museum/learn/animals/birds/spangled-drongo/ or (b) a fool or (c) a politician. A Galah is (a) the common Australian pink parrot that hangs round in noisy flocks https://australian.museum/learn/animals/birds/galah/ , or (b) a fool, or (c) a politician [who also often hangs round in noisy flocks]. So, there’s some new Aussie idioms for you (and I will come back to another alleged one later). It is not true by the way that U.S. car and tyre manufacturers engineered the closure of the tram system, as is sometimes believed. It was a bunch of British transport “experts” who after wrecking London’s tram system, came out here and recommended wrecking ours.

Back to the walk after that diversion. To my disappointment, the Ghost Tramway Track has in the past couple of years been “prettied up” so it no longer resemples the rough bush track paved with railway ballast that it was on my last walk here exactly 2 years ago in 2020. Now it has a short wooden walkway to protect the roots of a Moreton Bay Fig Tree (see title image), and the rest of the way has now been paved with soil/cement mix (also often seen on some Blue Mountains tourist walks). It looks good and is much less trip-prone which is probably why it was done. Still, it looks much less now like a former tramline and if not for the signs and photos you would never know it was one.

The Ghost Tram track takes us back to The Gap, and then on to Gap Bluff Road which is usually closed to vehicles but not to walkers (it is part of the “Bondi to Manly Walk“. (We could also have gone up the Gap Bluff Walking Track but somehow I missed that, but it all turned out OK in the end). This road gives nice views of the City and the Harbour framed between Washington Palm trees (as per photo). After a while we came to Hornby Light Road where we are supposed to make a hard left turn to get to Cliff Road and Camp Cove Beach. Turning right at Hornby Light Road takes you after about 20 metres to the entrance to HMAS Watson Naval Establishment, with a very formidable gate. Aaron though was intrigued by an adjacnet sign (on the civilian side) which advised that all bags would be searched on entry. He was about to take a photo of the sign when immediately a guard came out and sternly told him that he was not allowed to take any photos there! Not wanting to be “interviewed” by military police, Aaron beat a hasty retreat.

With that we went a short distance down Hornby Light Road and took a “short cut” down a steep little track to Cliff Street, which was our only true bush track on the whole walk. It’s a short walk onto Camp Cove Beach (almost empty at that time of the evening and also due to the cool weather), then onto the walk which takes us to South Head itself via the “South Head Heritage Trail“. Soon we saw a cannon from the 1870’s, the only remaining one of several which have been on South Head (and Middle Head) over the years. Fortifications were installed here over the years to fend off perceived threats from a variety of possible sources, starting with the French in the post-Napoleonic years (1830s), then the Russians after the Crimea war (1850s), then the U.S. Union Navy and it’s allied Russian Navy in the Civil War (as Britain had sympathies with The Confederacy and NSW was a British colony then – it’s complicated), and Russia again, then Germany in WW1 and 2 and lastly Japan. All over the place there are the remains of old gun emplacements.

We went past Lady Jane Beach (which is also “optional clothing”) and I said that we might go down and have a look later on if there was time, as the beach at this time of evening was deserted. Then on to South Head itself to see the old Lighthouse Keepers House (some say it is haunted) then Hornby Light. Meanwhile Aaron was again insisting that “yous” (or “youse”) was the acceptable plural of “you” in Australian English. I asked him were did he see that, and he said “Wikipedia”. Well, the truth is that anyone can put almost anything in Wikipedia. The best test of a word is: do you hear it often used that way in normal speech? If you don’t, then that is your answer!.

It was not his only misconception. When I told him that the small concrete shelter next to Hornby Light once had a searchlight to scare the Germans away in WW2 he said I was making that up. Why would the German Navy come all the way to Australia! Yet they did, three times, and it was scepticism like that which enabled them to get away with it the first time. The Germans did indeed stay well clear of South Head; instead they went further towards Newcastle to lay mines along the Central Coast in May 1940. A coastal vessel, the MV Nimbin, hit a mine and sank off Norah Head, north of The Entrance. The second time was in November 1941 (Kormoran vs HMAS Sydney), and again in December 1944 when a U-boat sank a U.S. freighter off the NSW South Coast. The Japanese though managed to get three midget submarines inside Sydney harbour in May 1942 although all were sunk.

Hornby Light still operates, being built in 1858 after the nearby “Dunbar” disaster I mentioned previously.. The group posed on its stairway entrance, and then a check was made to see if a sunset photo could be done, but it was too cloudy. So we continued along past more old gun enplacements to do a loop back to near Lady Jane Beach. Here, Budour and Aaron got out a birthday “cake” for me as thet had thought that my birthday was either today or a couple of days back; actually they were out by 21 days. Still, it didn’t matter; the thought was there, so Budour got out the “cake” (actually a Tiramisu) which had started to reshape itself in its container which we all laughed at. Then they sang “happy birthday and a match stood in for a candle.

Shortly after, we came to the top of the stairway to Lady Jane Beach, and as we still had plenty of time I said yes we will go down to the beach to have a look. Also, as it was Hallowe’en, I thought it was appropriate to light some Chinese funerary money on the beach and out of the wind where it was safe. A couple of the girls were horrified because they thought I was burning real money! I explained the tradition about burning these notes to send money to ancestors to spend in the afterlife (although nowadays there are also funerary credit cards as well). They are made of rice paper (same as cigarette paper) so burn completely without smoke or any residue, which of course is the idea; you can see this in the last few photos (taken by Budour).

While this was going on, a discussion or argument had started at the pathway above, as Kevin thought “it was rude” to go down to the beach. I couldn’t quite work out what his objection was all about; I can only assume that it was because Lady Jane Beach is “clothing optional”, and maybe he thought it was “no clothing obligatory”. It was dark (about 7.30pm) at the time we were there, and we were alone apart from a (clothed) couple at the other end of the beach. I couldn’t understand what the issue was. Just to make it clear, if you were there on a busy weekend, then yes it would be inappropriate to be there clothed among unclad bathers, but not in darkness on a cold weekday with the beach virtually empty. It’s also fairly popular with people fishing there at night until the park closes at 10pm.

After our visit (by some of us) to Lady Jane Beach, we returned back to Camp Cove Beach (also empty), stopping to photograph the City lights and a cruise ship, and then decided to return to the bus stop at Watson’s Bay instead of doing any more exploring (we had covered just about all we wanted to, anyway).

It turned out to be good timing as a couple of spots of rain were felt as we crossed to the bus stop, although it lasted only a few seconds. Later on, however, a check of the rain radar showed that a rain shower had hit the area about half an hour later. So it was back to either Edgecliffe Station or the CBD (depending) and half of us went for the train. I had to rush from Central Station’s platform 25 to way over to my train at platform 8 which left 5 minutes later so had no time to say goodbye to the train people. Aaron, Budour and Kevin and others continued to the City for a late dinner, where I understand the conversation about Lady Jane Beach continued!

We were very lucky with the weather which turned out to be not quite perfect; no famous sunset shots over the Harbour were possible. One person dropped out unable to get away from work, and another dropped out because of understandable concerns about the forecast rain. There were three people who did not turn up but did not contact me in advance, but given the weather forecast I won’t be too hard on them.

Photos below after the “ghostly cannon” pic are by Aaron, and after the “cake” photo are by Budour.