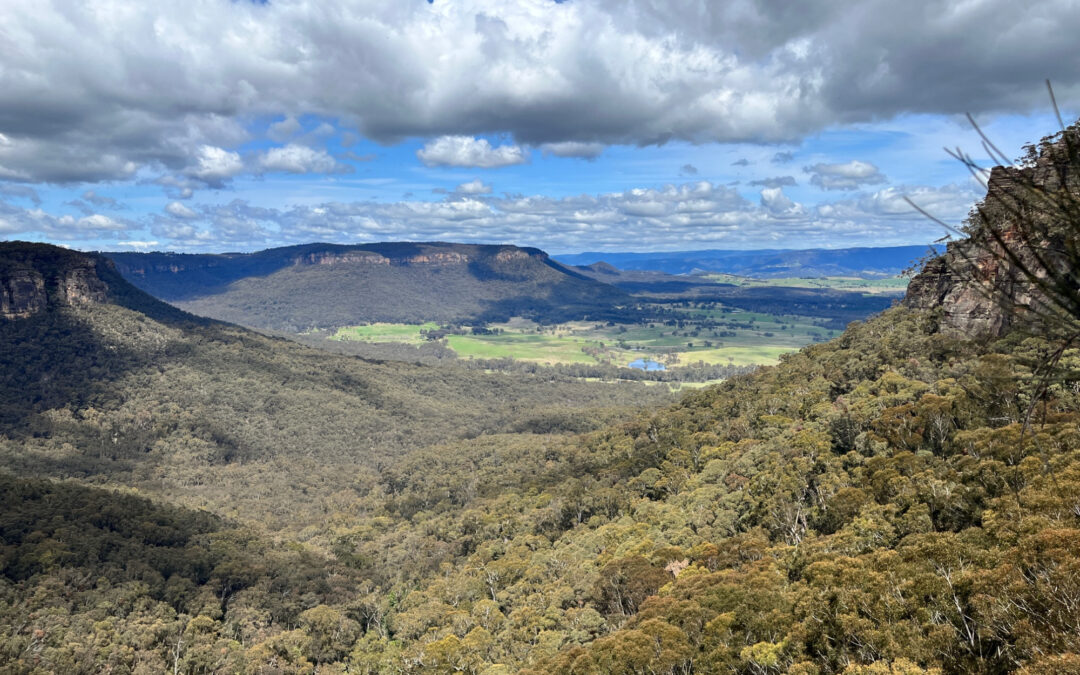 Most of the group got on the train at Central for the 2 hour 15 minute trip to Mount Victoria, although I got on at Strathfield. We got to Mt Victoria Station at 11.07am, which is a later start than normal for walks in this area, as the plan was to do only 5 hours including lunch. A couple of problems became apparent even before we had left that station. A certain person who I will not name to avoid embarrassment had got off the train at Katoomba, thinking that’s where the walk started. A few minutes after the train had left Katoomba Station I got a call from her asking where everyone was as she couldn’t see anyone on the platform. I explained to her that the walk started at Mt Victoria (as per the walk description) and she has missed the train! She had no option then but to do her own walk around Katoomba as the next train to Mt Victoria was 35 minutes later, and we couldn’t hold up the group waiting that long.😥

Next problem was that someone had discovered that she was missing her mobile phone, and not sure where she might have left it. The toilets were checked, and then the station staff were asked if the train could be checked (as it had by then gone into the yard near the station). The station staff agreed to try to locate it.

After that short delay (and a toilet stop too for a few) we walked up the street to cross over the Great Western Highway and then left down the road to Fairy Bower Reserve near which is an old toll house from the 19th Century. That’s where the Fairy Bower track starts. After a group photo we set off along this track downhill, quite muddy in parts after all the recent rain. It was an easy track to follow despite the mud, and came to a track junction which led either straight to Mt Piddington above, or to that spot via Cox’s Cave. Before that, we passed the small slot which is the access to Marguerite Cave, and John and Wing Chun went in for a brief look.We continued along and under an overhang along the track to Cox’s Cave, which is reached via a long metal ladder. John, Maaz and Wing Chun went up it and explored the area at the top, which is not very large and usually dry and dusty; John reported it to be muddy and slippery at present. Socheat went up the ladder but only to its top and back down again, and commented that the metal was ice cold to touch (the overnight temperature here had been 2 degrees C). The others did a bit of exploring for ten minutes, with Wing Chun going the furthest up.

After coming back down, we all set off again for the climb up out of this glen which was a rather rough and undefined “track” up a steep gradient but not too long. Once at the top the track started to become more defined and easily graded, and eventually we came to a large rock platform which I had chosen for a lunch spot on past walks here (by now it was right on 1pm). We settled down for lunch and Wing Chun pulled out of his pack a collapsible tiny chair, such a modern convenience!

After lunch we continued up the track to Mt Piddington which provides a great view over the Kanimbla Valley and the range where Hampton is located (which is on the road to Kanangra Walls and the PBT held on this weekend). Not quite as spectacular as the view from Katoomba’s Echo Point, but still quite impressive. John noticed the sign that said “to toilets”, and said here’s a chance to take a toilet break. Just one problem: there’s no longer any toilet there, so Blue Mountains Council needs to remove the “to toilets” sign! After the phioto stop on Mt Piddington we moved on to the next rack which connects it to Pulpit Rock (which is not the same Pulpit Rock that’s at Blackheath).

This track drops down on a rocky path and into a gully, encountering yet more muddy sections. At one point I saw a track going further down into the glen which I assumed was Reinit’s Pass (closed at present) but it wasn’t as we were about to find out. We continued on and at one place passed what appeared to be a cable stretched over the valley between two headlands (you can just see it in one of the photos). John worked out that it was a line used for tight-rope walking (“highlining”). We continued on and I got suspicious that we were on the wrong track and in fact headed to Hourn Point in the other direction. John was ahead and got to a point where the track was right on the cliff edge, and continuing on meant walking over crumbly red shale on an uneven path, only recommended if you are a very competent walker. With that we reversed course and again passed the highliners. A bit of a search found the right track to Pulpit Rock, and we started along it, passing just behind “Witches Glen”, which appears to be often used as an overnight shelter. Not far along, John asked for a pause to look at the “highline” walkers, but because their weight on the line caused it to sag below our line of sight, we didn’t stay watching for too long. At this point however, a possibly embarrassing incident for Socheat was avoided. While we waited for John, Socheat started off down the track and I assumed that he had decided to continue walking. I called him back, stating were were not resuming the walk yet. Socheat said that he wanted to go to the toilet,and can’t he do that. I advised him that he needed to let me know that, as I had assumed he was starting along the walk. So also did one of our young female members of the group, whom Socheat hadn’t noticed was following just behind him, assuming as I did that he had resumed walking! That could have had an interesting outcome!😮 I let Socheat know that it was OK to say “toilet” (and even saying “bathroom” is OK in that situation) as long as you tell the trip leader what you are doing. I’m sure most trip leaders will have had situations where they have started a group off after a short break, only to discover one or two people missing because they didn’t tell the trip leader that they were off behind the bushes for a “loo stop”.

Eventually we did set off along the track which passes under a cliff line and then crosses a few gullies, with more wet sections. There I found the real track to Reinit’s Pass as well as a side track to Ross Cave, which we didn’t take (it is quite rough). This track to Pulpit Rock has been knocked about a bit by the bad weather over many months, with fallen trees and eroded sections slowing down walking. We came to a location called “Red Rock Lookout” which is more crumbly red shale than rock. During a short break the girls got two sticks and started playing that dance where you have to step betwen the two sticks as they are moved back and forth and have to avoid getting caught between the sticks.

Then we continued until we came to a choice of a track going steeply up, and another one running more or less level and I decided on the latter. Along this we went until reaching another track junction with a “sign” just showing an arrow pointing downhill on one of the two alternatives. Looking down along this track I saw that it switched back on itself to go lower down, and I realised that by chance we had reached the third “zag” of the Zig Zag Track which we intended to use to reach Bushranger’s Cave down below. Thus we had accidentally eliminated the need to climb up to Pulpit Rock (which is where that other uphill track I mentioned must have gone to) and shortened our walk by some distance and avoided an unnecessary climb. This was confirmed when we saw a long walker coming down the upper track and said that he had come from Pulpit Rock.

With half of the Zig Zag Track already bypassed it was much easier to make our way down to the sign pointing to “Bushrangers’ Cave” (at the 6th bend of this track co8unting from the very top). It is only a short distance from the Zig Zag, going down a pile of rocks, then up under a large slab to the cave entrance. After exploring the cave we returned back all the way up the Zig Zag Track to its start at the top near Pulpit Rock. Here I made a mistake of going along a side track to what I thought was Pulpit Rock but was actually the path used by abseilers and rock climbers her. Retracing our steps we found the correct and shorter path to Pulpit Rock and admired the view, which is similar to that seen from Mt Piddington.

With 40 minutes left until the next train (and with an hour wait if we missed it) it was time to make our way back to the railway station at Mt Victoria. We made it in 30 minutes which is the normal time for this, going along the streets and crossing the Highway. I also remembered however that one girl had to see about getting her lost phone back, but apparently the train in question had earlier returned to Sydney before it could be searched properly (it was not known exactly where it was lost on the train). Station staff said they would contact her as they had her details if they found it.

So with that we started on our way home. Socheat and Wing Chun got off at Springwood to get a pizza, and Maaz at Blacktown, and myself at Strathfield. Wing Chun has also promised to do a trip report of his recent Warrumbungle trip! 😉

It was a good trip on a nice day, with some clouds but not as cold as I thought it would be, given the overnight temperature got down to 2 degrees C. And not a drop of rain.

Wing Chuns’s photos are the last 16 below (and also the title photo).

There were three “no shows” (not including the person who got off at Katoomba by mistake). It’s disappointing that we are getting a number of “no shows” on walks, and it’s a factor why some older experienced SUBW members no longer run Club walks, but instead do private walks with people they know are reliable.

It looks like next weekend (8th and 9th October) will be a write-off for walks due to rain, but let’s hope the weekends after that will be more walk-friendly. Got to fit in a couple of walks ending at beaches! It’s beginning to look like this year will be yet another when winter sunddenly changes into summer without an intervening Spring. It snowed overnight on Saturday at Barrington Tops, north of Newcastle. It also looks like La Nina will bring wet and cooler weather right up to the end of the year.