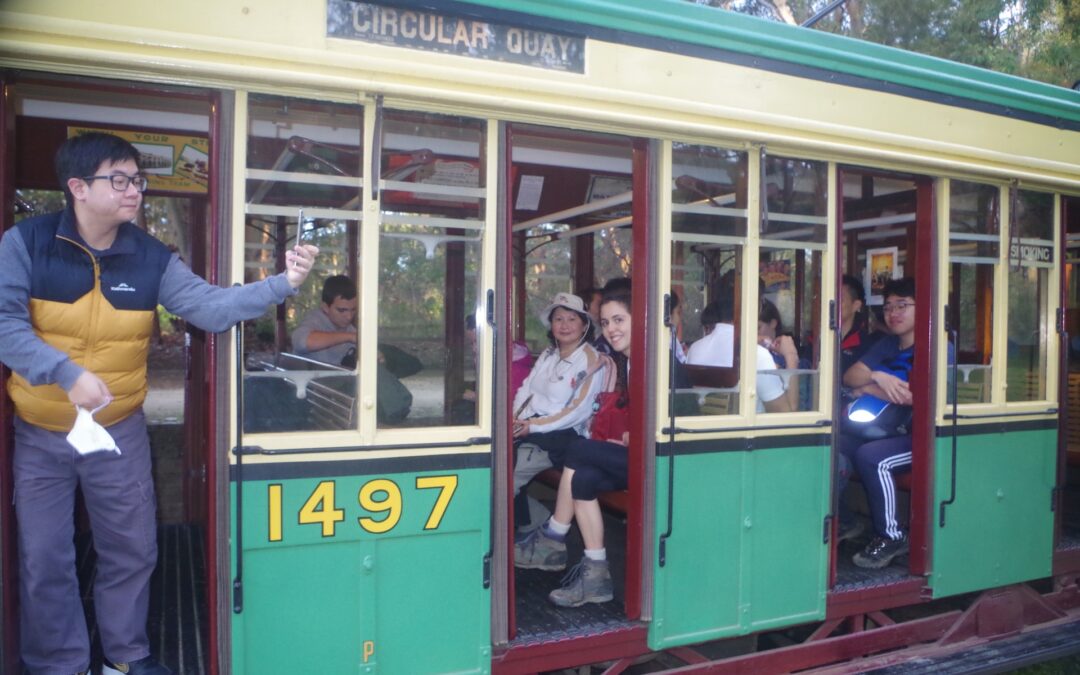 Because of trackwork on the Illawarra Line, the origial plan had to be reversed. Instead of starting at Loftus, we started at Heathcote and ended at Loftus. This was because trackwork would mean a 20 minute wait at Sutherland waiting for another train to go just one stop to Loftus, then another 20 minutes doing nothing waiting for the tram. That wasted 40 minutes could be put to better use by bushwalking, so Heathcote and the Karloo Track became the start point.

Most of us met up at Central Station for the 9.42am train to Heathcote, which was quite a late start for my walks. Meanwhile, Samina had got caught out by a train cancellation on the North Shore Line (because of Western Line trackwork – the same one that spoilt Chloe’s Blue Mountains walk plan that weekend – as well as industrial action by rail workers). Samina wasn’t going to make it in time for our train, so Vyon decided to stay behind to meet her on the next train, and they would catch us up at Karloo Pool later.

Catriona got on at Rockdale and we arrived at Heathcote at 10.32am. There were the usual toilet breaks needed there (I had earlier advised the group that there are no “bathrooms” on this walk, but there are TOILETS in a few places!).Meanwhile I received a text from Vyon that he and Samina had got an express train to Sutherland and were getting an Uber rom there.

We set off along the Karloo track which starts next to the fire station and a sign which states that the track is closeed at night for deer shooting (removal of deer from the National Park which have become an environmental pest). The track started off with some muddy sections from the recent rains, which gave warning that more such sections lay ahead. Indeed Leo had a slip which resulted in shoes getting wet and he bravely continued in bare feet until Karloo Pool. The Karloo Track is getting badly eroded with heavy foor traffic from visiors in summer to the Pool, which is a favourite swimming place on Kangaroo Creek. Along the track we saw some carnivorous plants (sundews – see photos).

We reached Karloo Pool by which time Samina and Vyon had caught up with us. We had to ford Kangaroo Creek here which resulted in more wet shoes! We had a break here and watched some brave swimmers jump into the very cold water on this mild winter day. After a break and a chance for Leo to put on slightly drier shoes, we set off for Uloola Falls. The track rises quite steeply and roughly for a while until levelling out. The muddy waterlogged sections of track were still with us, and surprisingly we found some pools on the track which had tadpoles, dozens of them. Then we had a water break at a large rock platform from which there are views of the Sydney CBD in the distance. We continued on with the track eventually dropping gently down to Uloola Falls where we had lunch. There were plenty of frogs there which started up a regular croaking chorus unless they were disturbed. We didn’t, however, actually see any. Lunch gave a couple of people the chance to dry out shoes more, and I taught the overseas students new Australian words: “chook” (=chiken), and “dunny” (=basic toilet like the one in the last photo). Our sole German speaker was also a wake-up to the trick of going to a “gift shop”! (“Gift means “poison” in German).

What I did see though was a trio of U.S. hikers try to catch one of the local dragons (Eastern Water Dragon, (Intellagama lesueurii lesueurii) and one of them had a large one by its tail which fortunately wriggled and escaped. Unbelievably stupid to try to catch reptiles, and all Snakes and other reptiles are protected in NSW. There are heavy fines for harming them and “The only exception is if a venomous snake is posing a genuine threat to life and safety“, say the regulations. In any case, a Goanna can sometimes be mistaken for a dragon, and catching one of these strong animals by the tail will result in swift retaliation with a painful bite, and they do have venomous saliva. Dragons can bite too although non-venomous. I did tell the Hikers that doing that was not allowed.

After lunch we headed off for the second last part of our walk to take us to the Hacking River and Audley. The track rises up out of Uloola Falls for a while (on a better track this time), before levelling out and following a series of rock platforms. There is one I call a “whaleback” because it looks like one. We had a water break at one which has a sort of view southwards over the lower part of the National Park, and after a short while reached a track junction which gave a choice of going straight down to Bottle Forest on the River, or a slightly longer way via Robertson Roundabout. We chose the shorter track (of course). This was another waterlogged track with muddy sections which again required some care not to slip. Eventually we came out at Bottle Forest with its wide lawns and picnic areas – and a toilet block. After a short break, with some admiring the ducks, we set off along the roadway which connects with the bridge over the Hacking River, and the main picnic grounds and shelter sheds there. We reached that, and some of our group were fascinated by the very large group of white cockies (Sulphur-crested cockatoo (Cacatua galerita)) in trees on the other side of the river. Then it was across the weir at Audley (fresh water upstream, salt water on the other side) and to the start of the Honeymoon Track.

The Honeymoon Track starts near the Audley Weir and ends up at the National Park entrance. A long time ago it was the only access to Audley including by horses. Even so, it is quite steep, as steep as many Blue Mountains passes, and there are only a few level places to ease the climb. It has steps that never seem to end. It maybe take 20 minutes going downhill (as the National Parks sign and “Wildwalks” website state), but it’s definitely a 40 minute climb up. Not only that, but I developed a camp in my left thihg which required a short reast, but fortunately it resolved after a few minutes and we continued (the cramp did return a couple of times momentarily but not enough to stop me).

I had allowed at least 40 minutes for this section, ignoring what was on websites as the aim was to get to the National Park Terminus of the tramline to meet the last tram of the day around 4.25pm to Loftus. We arrived with a bit less than 10 minutes to spare which allowed a very welcome rest from that climb up the Honeymoon Track. The tram arrived and we all bought our tickets from the conductor ($4 adult, $3 concession/student). The tram itself was an older cross bench “toast rack” style which normally doesn’t come out on this section in winter but was out as it was 100 years old this day, entering service on 28th August 1922 in Sydney. There was nothing sedate about the trip back to Loftus however as it proceeded at quite a brisk pace and a smooth ride (In the 1950’s the tram-hating NSW government regularly brought out propaganda comparing “jerky bouncing trams” with “gliding buses”. I think most would agree that the opposite is the case.

All of the group thought that the tram trip was the highlight of the walk and greatly enjoyed it, and that’s why the tram photo heads the walk report. At Loftus it was a short walk to the station with a few minutes wait until the next train back to Sydney.

Everyone enjoyed the walk which was done in fine mostly sunny weather (although only about 20 degrees C) and a good experience for the overseas students. A couple of people did call in sick plus one had overslept, but there was one outright “no show”.

Photos below, with four by Catriona (labelled). Apologies to any non-native Englsih speakers for any spelling errors that might have gone undetected.