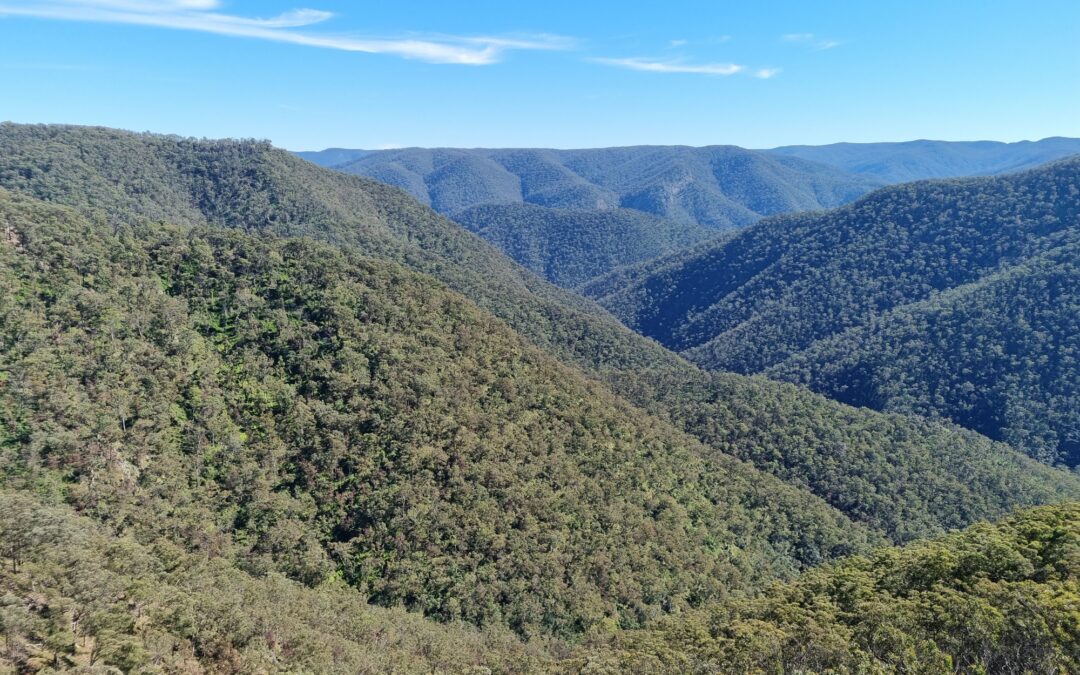 I decided it would be a good idea to write my first ever trip report in order to give anyone who was thinking of heading to the Wild Dog Mountains or anywhere in the southern Blue Mountains an idea of the conditions.

In the post bushfire landscape of the southern Blue Mountains one always expects it to be tougher going than usual. For this reason it came as no surprise when I got multiple emails informing me of the dense regrowth in the area. I had visited the area a few times since the fires however and hadn’t found it too bad (and much better than a trip I took to Kanangra and the Kowmung river in January 2021) so I decided to ‘press on regardless’.

Initially I had seven people signed up for the trip but this quickly dwindled to just four after I informed everyone of the reports I had received of impenetrable scrub as well as the usual warnings of leeches, stinging nettles, quad shredding climbs and knee shattering descents. I knew we would need an early start as well to allow for being a bit slower than usual so the fact that most of us would have had to get up at 5am or even earlier probably also had something to do with it. Then the night before two more dropped out leaving just me and one other lucky trip participant.

We arrived at Dunphy’s later than I was hoping, around 8:20am due to some issues with busses. The road in was in the worst condition I have ever seen it but still shouldn’t be any problem for most cars and no issue for my 4wd. It does highlight the significant amount of rainfall we have had though. The centre of the grassy carpark has turned into a mud bog.

After a bit of faffing around we set off, crossing the pointless stile over the no longer standing fence and began our descent into Carlon’s Creek. The conditions in Carlon’s and Breakfast Creek were fine and in fact seemed a lot less overgrown than it has in the past. In fact, I don’t think we even encountered any stinging nettles! There were the remains of some quite large landslides on some of the steep slopes but the debris didn’t present any major difficulties. The creek was very high as expected and wet feet were mandatory and of course there were plenty of leeches. Overall the relatively benign conditions gave me a false sense of hope for what was to come.

The old gate just before you begin climbing up Cattle Dog Ridge is till there although seems to have been washed a bit further downstream by a flood. Then begins the steep climb out of the valley. Conditions on the ridge were quite good with it being easy going most of the time. Definitely more vegetated than in the past but nothing you need to push through except for one or two sections. This changes rather quickly once you reach the cliff line at the top.

I took the usual route of contouring around to the left until the cliff breaks up but this was significantly slower than usual with all manner of regrowth slowing our progress. Eventually we found our way on to the top of the ridge and were greeted with a wall of thick scrub above head height. I eventually had to take a compass bearing to make sure we were going in the right direction to reach the lookout at the end of the cliff even though we had just come from that direction. What was normally a short stroll to admire a nice view before continuing on with the trip had me wondering if we should just turn back the way we came. Eventually we reached the lookout and spent a while admiring the view, reluctant to head back into the scrub. I have included some pictures of said scrub from various points on the walk to give an idea of what it was like.

It was decided that there was no honour in turning back and we would at least continue on to Blue Dog Ridge to see if the scrub would get any better (which it didn’t). At times you could avoid the worst of it by walking on the edge of the ridge (maybe where the soil is better drained) than the middle but there was no hard and fast rule and sometimes you had no choice but to plunge straight in and begin practising your freestyle and butterfly.

As fun as swimming through chest to head high (or even higher) bushes is, I decided it was not fun enough to keep doing it all day. So rather than continue along Blue Dog Ridge to Knights Deck and get ourselves further into trouble I decided to head S and then E to reach the track that forms the Medlow Gap – Coxs River part of the K2K route, hoping that this would be easier going than what we were currently in. What followed was more uneventful bush bashing. Occasionally we came across remains of the old foot pad but like many foot pads do it had a habit of disappearing when we needed it most.

Eventually we found the track which was muddy but easy to follow before reaching the Medlow Gap fire trail. Then of course the boring fire trail bash back to the car.

It’s amazing just how much this whole area has changed. Even around a year ago it was nowhere near this bad and still quite enjoyable country to walk through. Now it seems that almost any route in the area will be a challenging scrub bash. If you are planning on heading to the Wild Dog Mountains allow for significantly more time than what you think you need to cover the distance and be prepared for some tough conditions.

It is a shame that the regrowth has made the area so difficult to walk in now. It would be interesting to hear if anyone knows about other areas that went through a fire and regrowth cycle, how they recovered and if we can expect the open forested landscape to come back in any reasonable time frame.