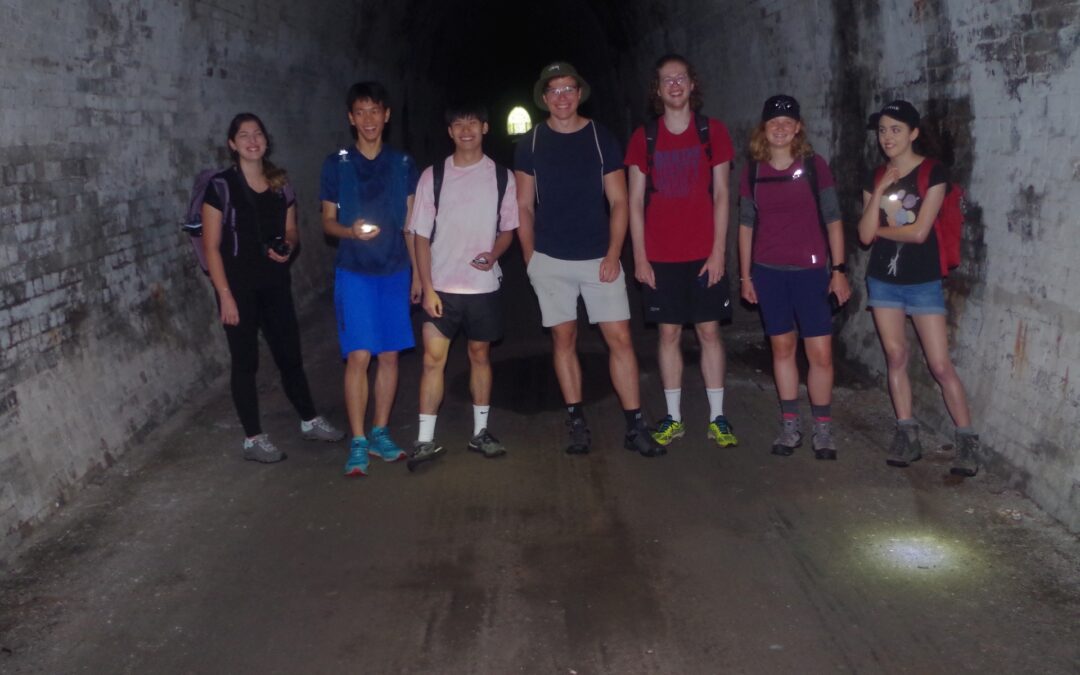 Six of us met up at Central Station on its noisy platform 25 and set off to Helensburgh. Dila got on at Redfern and Catriona at Hurstville. All eight of us on arrival at Helenburgh had a loo break before I gave an overview of our plan before setting of with our first stop being Wilson’s Creek waterfall almost right next to the station. Crossing over the rail line on the road bridge I got talking to a local who was waiting for a steam train to pass through. Benedikt had noticed a steam locomotive standing at Tempe as we passed though that station, so I guessed it must be the same one. This would be an unusual sight for our overseas students so we decided to wait another 5 minutes or so until it arrived, (For the benefit of some people, it was a 59 Class loco built in Philadelphia USA in 1953). After the steam train left we headed off to Wilson’s Creek Waterfall, which is about 200 metres down the road from the station. There is a tricky track to get down to it, although that doesn’t stop the local kids from swimming in the waterhole on hot summer days (I don’t really trust the quality of the water). On past walks here I have led groups along the 80 metre long Wilson’s Creek Culvert under the rail line, but the exit at the other end would be impossibly steep and slippery and muddy due to the recent run of wet weather, so I gave it a miss this time.

Then it was back onto Wilson’s Creek Road for the 700 metre road bash to get to locked gate for Garawarra State Conservation Area. From there a BMX track winds into the bush and ends up at a concrete slab which was the former site of a mushroom farm here but has now had some unofficial modifications for BMX practice. Unfortunately it ws on this stretch that my left Achille’s Tendon started playing up, and I took advantage of a break here to bind it up. Into Cawley Tunnel we went, and it was nice to see that most of the mud and slush that was at this entrace on past visits had been washed away in the recent heavy rains leaving mostly a gravelly surface to walk on, even if it was still under water in places. Locals seem to have placed planks to step on to keep shoes reasonably dry. Cawley Tunnel is 381 metres long and was the second of the eight old Illawarra tunnels constructed in 1888 and closed in 1915 (except the eighth one, Clifton Tunnel, which still has trains). Doris posed in one ot the refuges, placed in railway tunnels to provide shelter to rail workers who might be in the tunnel when a train arrived. They are 50 metres apart on each side.

We didn’t exit the tunnel via the “track” at the Sydney end as it was quite muddy, and would have meant going back to the locked gate via an unexciting road bash. So we returned back to the Wollongong end of the tunnel, then onto the BMX track, and then back to Helensburgh Station. Next to the fence at Helensburgh there is a rough track used by local school kids as a short cut to the Station. We went up that, then onto a gravel service trail, then another partly muddy track to the fence around Old Helensburgh Tip. We followed that for a while on a rough track made worse by washaways from recent rain, which also made the undergrowth luxuriant. At one point we were caught by some Blackberry vines (no berries in them; they only appear in mid-Summer).

Soon we came out at the Hacking River Fire Trail which continues all the way to Hacking River, and then Lady Wakehurst Drive. It is straightforward walking there although there are large puddles on several section caused by all the rain. I found a large rocky ledge above the trail which was suitable as a lunch spot (dry, and no ants), and we had lunch there. Then it was on along the fire trail until it reached the River. Along there way there are many stands of Cabbage Tree Palms which interested the European students as there is nothing like that in Europe.

On reaching the River, however, it was running quite swiftly and the ford where the trail crosses it, normally quite shallow, was under about half metre of water apart from exposed rocks. We searched for a better crossing and one was found a bit downsream which had several rocks whch could be used as “stepping stones”. Most of the group crossed there, but I was concerned that with my Achilles’ Tendon still sore and maybe affecting balance on the rocks, I didn’t want to risk having my pack fall into the river, with camera and phone! So I simply decided to step out into the water at the ford, with shoes and socks (fortunately, woollen socks). Using a long stick to test the depth (although the water was fairly clear) I avoided any deep holes. Dila followed me across. Then a short walk to where the fire trail meets Lady Wakehurst Drive. Noted that there is a new locked gate there to deter 4-wheel drivers (although trail bikes can still get past it, it seems, as we saw three earlier).

Then there was an unavoidable 1km road bash on the verge of Lady Wakehurst Drive, with the verge normally wide enough to avoid getting too close to traffic. Recently there has been a lot of leaf litter, twigs and branches and bark droppd onto the verge, as well as a few stinging nettles. I tripped on one of the hidden branches and although I didn’t fall I stretched my already tender Achille’s Tendon which was quite painful.I had to lie down for a couple of minutes to catch my breath. Benedikt offered to cary my pack from there on which I glady accepted. Eventually we reached the start of the Lilyvale Track (wrongly signposted “Coast Track”) and ting checked the estimated walk times on Google and although doing the Lilyvale and then the Coast Track was a bit longer, it was safer than walking the road verge to Otford, as the verge does get quite narrow from here on. It could be risky from oncoming traffic and careless drivers. Indeed one clown in a sedan blew their horn at us as they went past; we were not on the road so quite unnecessary. (I have found Motorbike riders to be the most courteous drivers to walkers on this road in the past).

Anyway up the Lilyvale track we went. It is an old track developed in the late 19th Century for access to the Coast Track and Burning Palms from the former Lilyvale Railway Station, which was closed by the bean counters in 1983. It is shorter and less steep than the nearby Burgh track to Garawarra Farm. It is in reasonablly good condition although rarely used now. On the level section near the Garawarra Ridge Trail, however, some of the group were alarmed to see that they were getting leeches, and had stopped to remove them, I advised them to keep moving as stoppinbg to check and removeleeches ony makes more get on you. To prove the point, as I was removing a leech from Ting’s shoe, another hopped on!

A stop was made at the track junction with the Ridge Trail to remove leechs as we were mostly out of leech territory here. Some insect replellent was use to get some off! We then set off for the final leg of the walk along the Rodge Trail and then the CoastTrack to Otford Lookout. By then the sun was getting low, illuminating the trees with a golden glow as can be seen In Catriona’s photos. At Otford Lookout we were 23 minutes to train time so we would make it. At Beaumont Road Ting took over carryig my pack after I have got my phone and wallet out, and according to Google it was 10 minites walk to the station (and Google turned out tobe correct with respect to my own slow speed because of the Tendon problem). We arrived at the station with 4 minute to spare until train time, although the train was 4 minutes late anyway.

Once on the train we settled in for the one hour trip back to Sydney. We talked about how fast it gets dark here once the sun has set,and Doris observed that it gets dark “superfast” here. We discussed the election and our compulsory voting and preferential system. In the train a leech got off my shoe and started crawling around the floor, to the interest of another passenger who was not alarmed by it. I put it in my lunch pack which has a cold pack, along with a couple of other leeches which appeared later on on my own train homer Everyone seemed to be happy with the walk, and they saw some exciting things which I can’t discuss here (Club Prez Chloe knows the reason – and no, nothing illegal!).. On arrival home the lunch pack went into the feezer overnight along with my socks which also had a couple of leeches. That fixed them! I found a few inside my socks and shoes when I got home, and put them in a plastic container to feed to the chooks the next morning (along with the now frozen leeches).

My photos are below with some of Catriona’s. (thank you, Catriona).

We didn’t get to do a second tunnel which was a plan if we had enough time. That would have needed an hour earlier start inthe morning. Maybe something for another trip in future. My tendon injury means that I probably can’t do walks for at least anothet two weeks until it mends properly.

And there were no “no shows” on this walk.