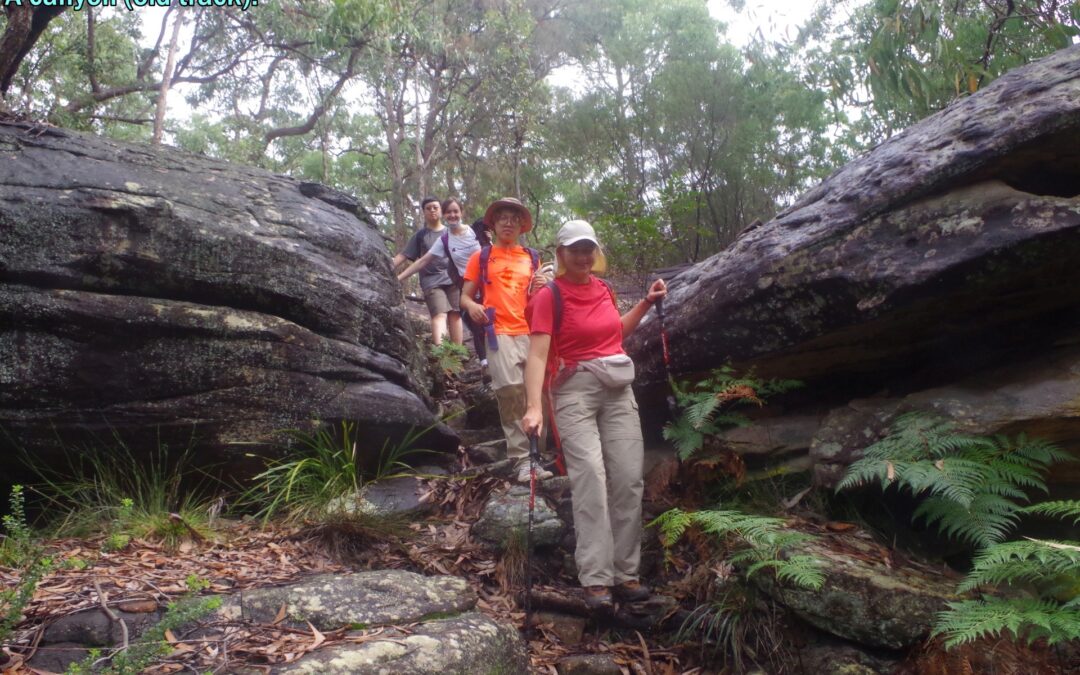 This walk was intended as an easy day out having a look around Brooklyn and doing a few short tracks in the process. It essentially replaced the intended walk along the Great North Walk which was cancelled as that track was closed. In the process I actually found a new track!

The five of us met up at Hawkesbury River railway station during a short rain shower, which the radar showed seemed to be targeting Brooklyn in a narrow rain band! The shower didn’t last long so we set out for our first of 3 short walks. This walk took us alng the main road into Brooklyn and then to the War Memorial and its park, with another short rain shower on the way. Pausing briefly to note the wreaths laid there for Anzac Day (this day) and aso the little monument noting the involvement of a Brooklyn local with the Red Baron (Manfred von Richtofen) in WW1. I will mention the story of The Red Baron later below.

Then our walk continued onto the boardwalk along thefreshore of the bay and, as it was low tide, the pneumatophores of the mangroves could be seen as a miniature forest of tiny spires (see photos) The mangroves use these to “breathe” through the silt and mud in which they grow. Then it was back to the park and back to the road almost returning to Brooklyn town, and next to the road bridge over the railway our next walk started.

Until bypassed by the Great North Walk about 20 years ago, the original track to Brooklyn Dam started here. Nowadays the actual Great North Walk starts a couple of blocks further back from the pub from William Street and initially uses the steep concrete Railcorp road. At present though the Great North Walk is closed due to weather damage, and so not avaiable. This old track is only used mainly by Brooklyn locals now – and adventurous bushwalkers like us! It climbs up a set of old wooden and stone steps and meanders vaguely on for a bit before reaching a railway service trail which more-or-less follows the high tension railway power ines for about 1km. At this point there is a large overhang nearby which makes a good shelter in rain (although by now the showers had ceased and the radar showed no more coming). Wehad a lookinside this overhang, then bak to the acess trail to continue on. This access trail meanders along and at one point up a steep hill before levelling out and winding round to eventually reach its junction with the Great North Walk at a sign which says “Brooklyn Station 1.3km” (actually, that’s the distance to the pub).

As the Great North Walk was “out of bounds”, we stopped just short of it and got the sign in the background in a group photo. From there we turned around to go back to Brooklyn, but not wholly the same way. About 100m down this trail a vague side track appears which cuts off a loop of the service trail. In the past I have taken that track to what seemed to be a dead end on a small rock platform, and turned back to find the “proper” track. This time though I decided to see just what is beyond that rock platform as we were not pushed for time and could explore a bit. Indeed another vague track led off that platform and further into the bush, until reaching that railway access trail again. So we followed the access trail back to the overhang and then back down the other vague bush track to the main road near the rail bridge. Then as it was lunchtime we went ot the fish and chips shop opposite the Station and Jenna, Toby and Hongyou ordered their lunch. It took less than 15 minutes (no Maccas-style fast service at village fish-n-chips shops as someone discovered on a walk some years ago, and no “do you want fries with that”).

With the take-away lunches in hand, we then went a short distance towards the marina then up a set of steep stone steps to a trail which led us to McKell Park where we intended to have lunch. All the picnic shelters were taken, so we opted for a large flat rock with a view over Lookout Bay. While there a couple of Bush Turkeys came over looking for scraps (it seems that picnickers often feed them as we saw a bit later). Then it was off to Flat Rock Point where there is the remnants of the base where an anti-aircraft gun was loctaed during WW2 to guard the nearby rail bridge over the river. Then down another set of stone steps to the foreshore, to follow it back to the fish n chips shop (with a toilet stop along the way).By then we still had 45 minutes until my train went, so we did some more exploring, after Roxana got a cup of tea at the cafe opposite the pub. Another set of steps off the end of Brooklyn Street beckoned, and up we went, not knowing if they might actually be steps to a private home. But no, they simply linked up with a road on to of the hill and on to McKell Park where we had been previously. So along that and then down yet another set of stone steps (they seem to be everywhere here) to the foreshore. Then back to the railway station to await our trains. While there another brief but very light shower came, the only one we had since visiting the foreshore boardwalk earlier. Everyone seemed to be happy with the walks we did.

A couple of things to mention: Google Maps shows the old track I mentioned as being part of The Great North Walk; it is not (Google Maps gets a few things wrong). If you are unfamiliar with this track beware that there are several leads off it and the railway access trail which lead a long way…into nowhere.

(History Context): And about The Red Baron: Manfred vonRichtofen was a WW1 German pilot “ace” who was eventually shot down and soon died on 21st April 1918. For a long time there was dispute over who shot him down, despite a post-mortem by an Australian medical officer showing the fatal shot came from the ground from an Australian gunner. The British authorities were having none of that! “Our gallant Royal Flying Corps officer (actually a Canadian) did it, and that’s that”. It took over 100 years for British historians to acknowledge the truth. But what has been competely missed in this argument was just why did the very experienced pilot von Richtofen fly so dangerously low over the Australian lines. After 4 years of war, troops would have been gettng very war weary and more than a bit stir-crazy, and von Richtfen would have been no exception. War takes its tioll, a lesson which still hasn’t been learned over 100 years later.

Two people pulled out fairly late, another one pulled out that morning but didn’t give a reason (at least they let me know), and someone else got on a wrong train and missed out. There were no outright “no shows”.