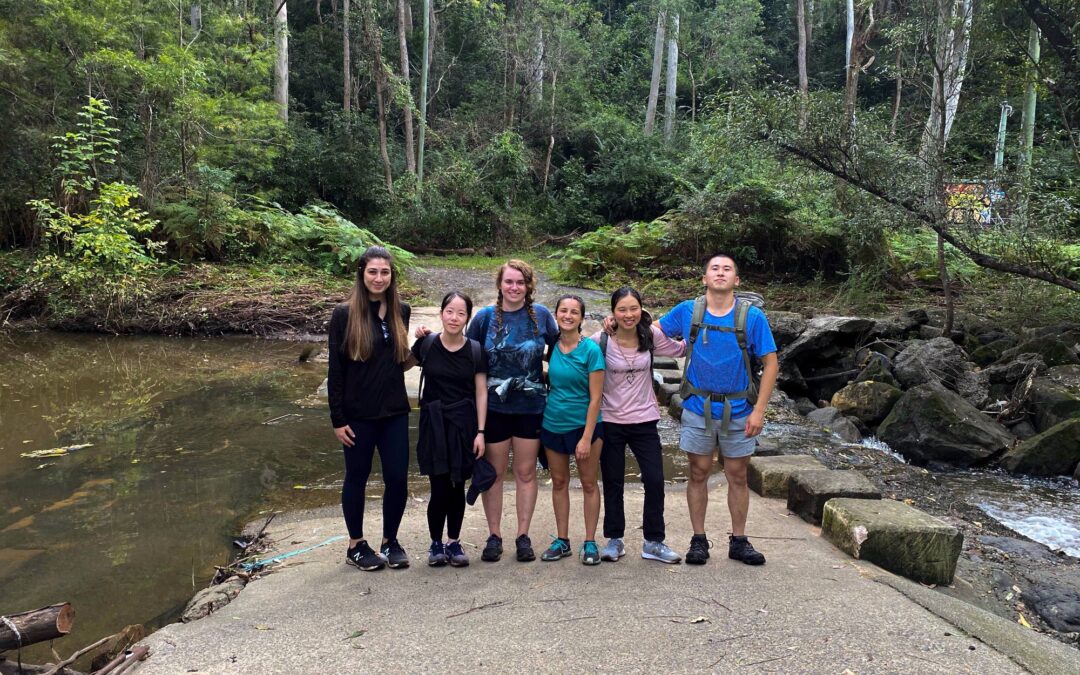 We had a great group of people come on the Walk of Art bush walk, with myself, Chloe (SUBW president), Angela, Danah, Peggy and Eric. After catching the train from central we had a short ride out to Hornsby station, where afterwards we walked for 10 or so minutes to the start point of the track. The track itself was well formed, although just on the dirt ground without any paving or boardwalk. After snaking through Gum trees we reached stairs, which descended down durther into the valley and connected to Ginger Meggs Park. From there we continued with a short jump on stumps to cross the creek (pictured) and we began to ascend seeing a lizard along the way and coming around Waitara Creek where we had another river crossing (pictured). At this point we began to ascend and once nearly reaching the peak (as we were so hungry but didnt realise it was only 1 more ridge above, and the map showed we were right on it), we stopped for a long lunch break, enjoying the lovely weather. Once we continued on, the bush became wetter, filled with lots of ferns and, unkowingly, filled with leeches! After Danah noticed 1 on her we suddenly realised they were all over our shoes and if we stopped for even a second they would crawl up through the tred of our shoes and onto our legs! Luckily leech land only lasted for the last 10-15 mins and all was fine once we got to concreted ground (or so we thought). At this point we saw another lovely lizard (pictured) and got a group photo! As we started to walk back through subrubia we thought we were on the way directly to the train station, but unfortunately we had to ascend the 339 stairs (yes we counted) from the beginning! After this it was a breeze to get back to the station to get the train home to central. It was only once we were on the train hat we noticed there was still a leech stuck on my leg! Thanks to everyone’s help we got it off and a plaster on. Et voila, the first Walk of Art trip was complete! All along the way we were getting creative by taking photos either with our phones, digital cameras, and film cameras! Big thanks to everyone who came and made it an awesome trip, can’t wait for the next one!

Photos are by myself and Danah, but unfortunately the website doesn’t support videos, so head over to the SCASS instagram to check them out!