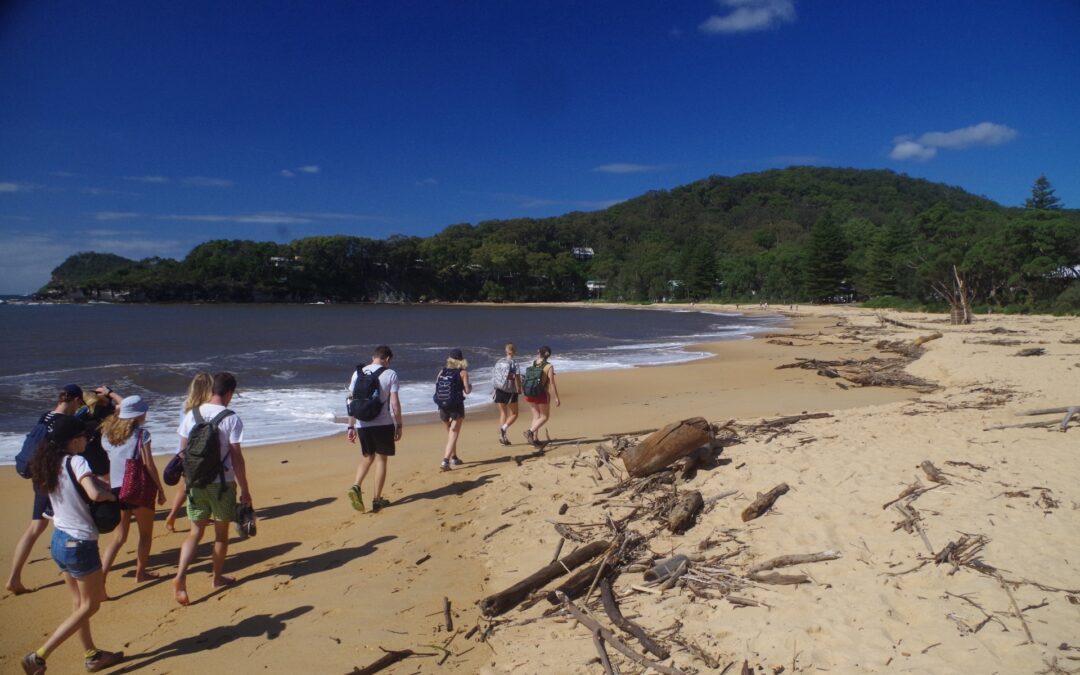 Nature threw up some unexpected challenges on this normally straightforward walk. A plan to get the bus to Pearl Beach instead of starting at Umina to avoid the high tide there was thwarted also.

All the group met up at Woy Woy Station and headed down to the bus stop where the bus to Pearl Beach as just arriving. To my dismay a large tourist group of over 40 people were already queuing for the same bus, and it was the ONLY bus to Pearl Beach that day. Given that bus loading restrictions due to Covid safe management could mean that all of my group of 21 might not be able to board, I decided there and then to catch the Umina bus which was leaving 6 minutes ahead of the Pearl Beach bus. Meanwhile four of the women in my group had headed to the toilet there as they thought they still had almost 7 minutes until the Pearl Beach bus left. With that now eroded to 3 minutes, they had to be asked to hurry up for the Umina bus! (It was rather poor planning of that large group’s organisers to almost take over the one and only bus to Pearl Beach, and that could also have meant local people being left behind at bus stops along the way – but I digress).

We got off three streets back from Umina Beach and when we arrived there, there was quite a surprise. The normally 40 metre wide beach had been reduced by the high tide and the recent storms to little more than one metre wide! It was also littered with a great amount of driftwood brought down the Hawkesbury River in the recent floods. The beach was also closed to swimming, although a few board riders in wet suits were out on the waves. Then we came to where Umina lagoon enters the sea, and normally it is a trickle or nothing at all. This time though it meant wading in thigh-deep water to get across it; the recent rains had filled the lagoon to overflowing. To find an alternative route around the lagoon we went into the adjacent camping area, only to find ouit from campers that the only entrance, and thus only detour route, was to go back to where we first entered the beach! This left us with no choice but to wade across the lagoon entrance. We all made it across without getting clothes too wet.

After drying our feet we then moved off to Pearl Beach, this time having to briefly walk along the main road as waves were breaking over the rocks below making that water-level route impassable. Soon we came to the pathway under Mount Ettalong headland which was once the old direct road to Pearl Beach until erosion and rock falls closed it a long time ago. This track gives great views towards Lion Island and Pittwater. It was much damper than normal thanks to all the recent rain. Then it was down to the north end of Pearl Beach where there was a lot more driftwood piled up as well as debris which appeared to have come from homes damaged in the Hawkesbury floods..Noted along the way there are deposits of mineral sands which contain concentrations of important titanium minerals (including rutile and ilmenite) and zircon. Not in amounts worth mining here fortunately (but are mined along the Mid-north Coast of NSW). Pearl Beach itself had another two lagoon entrances to cross but these were not the width and depth of the one at Unima and so were easily managed.

After a water stop at Pearl Beach we headed off down the 10 minute road bash to Crommelin Native Arboretum. These gardens contain only native Australian trees including the stands of palms. (It is also hoped to re-introduce Koalas here in a few years’ time. That makes me wonder if that large tourist group I mentioned earlier thought they were already there; we passed them again as they returned from the Arboretum).

After another break there we set off a bit further down the road to the entrance of the Sydney University field station wherea vague bush track starts nearby. It vaguely weaves its way up the hill and because of months of rain has become somewhat overgrown. That caused me to go up a false lead before returning to find the track proper. It eventually comes out at the Pearl Beach Fire Trail. We followd that on a gentle uphill gradient until reaching the short sidetrack to Warrah Lookout, which we took. Warrah Lookout provides great views of Patonga, Cowan Creek, the entrance to Hawkesbury River, and Barrenjoey Head and Palm Beach. The water of the bay was rather brown because of all the sediment brought downstream by the floodwaters.

After a short photostop there we went a bit further up the fire trail until reaching the side track to Patonga, which by now forms part of the Great North Walk. This runs level (and a bit muddy) for a while before starting its descent to Patonga. It is rather rough in places and the recent rain storms has caused some erosion of the track. It drops down steeply until reaching the north end of the Patonga snad strand, and we crossed yet another lagoon entrance, this time quite narrow and shallow. The waterfront here was piled high with masses of driftwood and rubbish, more than at Pearl Beach or Umina as Patonga is on the estuary of the Hawkesbury. I reminded a couple of people who asked about swimming here, and reminded them that it was OK provided you didn’t mind being eaten by a shark. The sediments will have attracted lots of small fish and prawns which attract bigger fish…and sharks. It is particularly risky swimming here after floods.

We headed for the shelter shed at the Cricket Ground and had lunch about 1pm. Some of the group went to the coffee shop, and after lunch 6 of them decided to stay at Patonga and catch

the bus back to Woy Woy later, instead of walking back to Pearl Beach (maybe thinking of that steep climb out of Patonga!). So after lunch the majrity set off back to Pearl Beach the same way we had come, except that we took the Pearl Beach Fire trail all the way back to the road instead of taking that bush track we used earlier. We actually did the distance in good time, leaving Patonga just before 2pm and arriving at Pearl Beach at 3.15pm (Wildwalks site quotes 1 hour 45 minutes for this section).

At Pearl Beach it was swim time until the bus came at 4pm. Unusually the water was actually warmer than the air temperature at that time of day; 24c versus air temp 23C. Seven of the group went into the water and had a good time. Then it was change out of swim clothes and to the nearby bus stop to await the bus. (I will advise at this point that swimming at the south end of Pearl Beach is usually quite safe, but NOT at the north end which has had a few drownings in recent years. Pearl Beach is not patrolled).

The bus arrived on time, and in it were the six who stayed back at Patonga. Then back to Woy Woy Station for the 4.39pm train back to Sydney (except myself; I was headed a few stops further north).

Everyone seemed to enjoy the walk which was in weather not too warm, and the track was shaded most of the way, except while walking along the beaches. There were a few unexpected obstacles caused by the recent very wet weather but we managed to overcome those. And there were no “no shows”.

The unpredictable weather at present is going to cause problems organising walks, as also is the present situation of no Blue Mountains trains past Springwood until the washaway under the track near Katoomba is repaired. Some dirt roads to walks and campsites are in very bad condition, such as the road along the Newnes Plateau to Tiger Snake Canyon car park and the Glow worm tunnle. It’s always been bad but it must be really bad at present!