The Coast Track, Royal National Park (Bundeena to Otford) – 27.4KM in one day 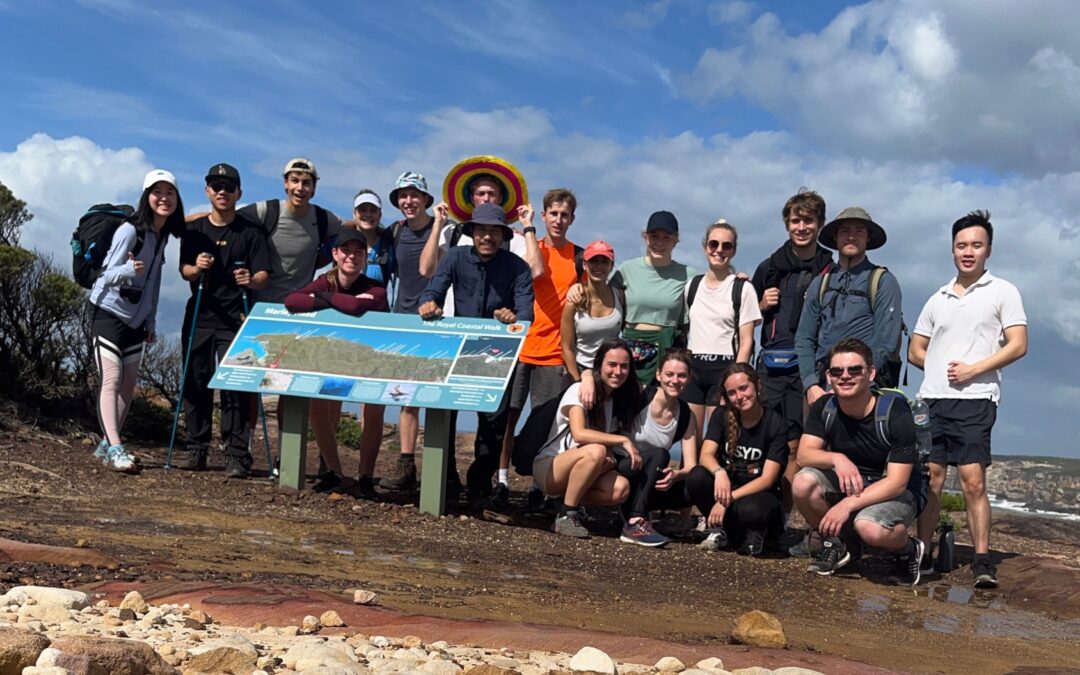 The hike started with all of us meeting at Cronulla Station. Our aim was to take the first ferry from Cronulla to Bundeena which was at 8:30am. I got to Cronulla Station at 7:15am with plenty to spare time in my my hand for a nice breakie. When I got off at the station, A familiar voice called my name from behind and when I looked, It was Sunny(a.k.a Our group’s lucky charm to keep Sunny weather). Then we grabbed our breakie and ate it at lovely Cronulla beach withbeautiful sun above us. We knew Sunny’s charm was working and it was going to be a nice and clear day:)

The trains to Cronulla were on time but trains going to north side of Sydney weren’t. One our group member Amanda was meant to meet Aidan at Chatswood to get a lift to Cronulla but sadly she couldn’t make it and Aidan had to come straight to Cronulla for himself to be on time to catch 8:30am ferry.

Close to 8:00am, I started seeing recognising faces waiting at the station. We started gathering and introduced ourselves to the group. There were 12people+1guest signed up for the trip. Two people including Amanda and Gaia couldn’t make it for their own reasons. Among us, we were Sachin(myself), Aidan, Sunny, Elodie, Jacky(guest), Noah, Xufeng, Alina, Alberto, Maria and Julian. We started heading to Cronulla Wharf after I made sure 11people has arrived for the trip. We took the 8:30am ferry to Bundeena then from there to start of the track. On the ferry, There were so many people wearing Sydney Uni T-shirts and carrying Sydney uni Bag, we couldn’t figure out if there was another trip happening that day as well. After getting off at Bundeena. I decided to give briefing about the track we were hiking. All of sudden, There were 19people listening to my briefing. Few of my group members including myself didn’t know why they were here or what’s going on. With little bit of chat, It was 9people who didn’t signed up but decided to just show up and follow us the entire way.

I made it clear that people who didn’t sign up won’t be covered by SUBW club insurance incase something happens to them. We took a toilet break at Bundeena and started heading to the start of the track which was after the 15 minutes of walking through Suburban roads.

At start of the walk, With group of 19people, more than 27.5km ahead of us with more than 843m elevation gain, I had to give fair bit of warning as it includes long day of walking continuously with steep uphills at the end and once we are pass mid way, there is no public transportation and the only way get out of there would be by finishing the walk at Otford station, Unless someone is keen to hitch a ride from Garrie beach as road to Wattamolla beach were closed and there were no one there.

Everyone seemed full of energy. So, we began our long day of bushwalking with a single step.

Not long after starting our hike, we were blessed with beautiful cliff view of the ocean. After that, the track is pretty flat with little bit of downhill passing by Wedding cake rock, Garrie beach, little Garrie beach then long stretch of to Wattamolla.

We took our first short break at Little Garrie to re-apply the sunscreen and power up. The next stopping point was Wattamolla dam where we went for a swim and some people were very hungry so they had their lunch there. Having a big group, it takes time for everyone to get ready and start walking again. After some snacks and a good swim, we started walking to Wattamolla picnic area.

We had a toilet break at Wattamolla picnic area and decided to have our lunch break at Garrie beach. Everyone was walking in their own pace. Aidan, Noah, Alina and few other guys were very fast and went ahead but I was at the back with everyone else. The views were mesmerising and soon after we saw The Eagle head rock. Everyone was motivated to walk with the fact that we will be stoping at Garrie beach to have our delicious lunch.

Then, We had our lunch at Garrie beach.

As Garrie beach was accessible by vehicle, There were quite a few people fishing, swimming and the beach was patrolled by lifeguard.

After our lunch, Few of us decided to go ahead and walk all way to Wollongong which was very ambitious(P.S they bailed out at Otford). With5 people going ahead aiming to walk all the way to Wollongong including Aidan, Noah, Alina and other two. It was 14 of us left.

The steep uphill after Little Garrie beach to Thelma head wasn’t easy but we decided to go for a swim at North Era beach and thinking about it helped us pass the hill very quickly.

We got the whole beach to ourselves and went for a swim at North Era beach while few people stayed at the bay and took a breather as it was going to be gradual uphill and down all the way to Otford.

Got changed, wore our socks and shoes on top of sandy foot, We started walking again and when we got to Era beach, I saw a girl sitting by herself and when we got close by, she smiled and waved at us. For the love of God.. It was Alina!!!! She said, they were going fast and it was hard to keep up and she decided to wait for us.

With 15 of us, we started making our way to Burning palm. Few people from the group wanted to go to Figure 8 pools which was not possible with the high tides and we being short on time as it’s a long detour from the main track. While walking through Burning palm beach, we encountered a cute wallaby. Everyone was happy to see a native animal out in the bush.

Soon, we started going uphill making our way to Otford lookout and then to Otford station.

When we reached to Otford station, we heard the announcement saying there are no trains running in both direction and we will have to catch a bus replacement to waterfall station. Thanks to Jacky and Sunny, we made our way to the bus stop and then to waterfall station. From there, we took a train home.

Overall, We walked more than 30kms in 7 hrs 30mins with elevation gain of over 843m.

P.S – Thanks to Sunny for taking all these beautiful pictures!