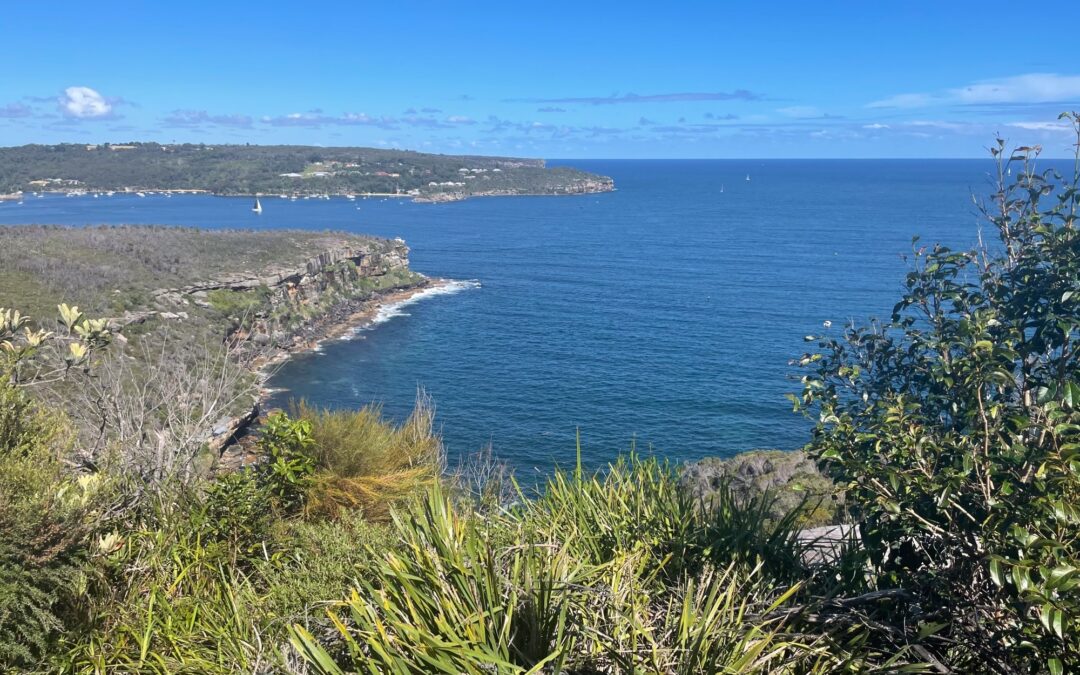 The Spit Bridge to Manly walk was indeed an iconic walk. We started at Spit Reserve Park, which is this really pretty park situated on a small peninsula jutting out into the harbor. The path wound through pretty forest and there were several quiet beaches along the way. There were a few lookout points along the walk that had fantastic sweeping views of the harbor! There were two sizable waterfalls, and we saw a few water dragons basking on rocks too! The weather was really nice too, it wasn’t too hot or too cold, and there was lots of sunshine! The walk had lots of little on-and-off inclines, and a surprising amount of stairs.

Also, there is a colony of real live penguins around Manly Wharf! When we got to Manly Wharf, we saw these signs saying watch out for penguins. Some of the people on the walk knew about and had briefly seen some penguins in the past, and others were really surprised that there were penguins there. I had learned about the Manly penguins previous to this in my biology class. I got the impression that it is rare to see a penguin, but I’m not sure. The penguins are called either Fairy Penguins or Little Penguins, and only get to about 30cm tall! John said that a major threat to the penguins were attacks by dogs, cats and foxes. Manly Council has more information about the penguins if you are interested: https://www.environment.nsw.gov.au/topics/animals-and-plants/native-animals/native-animal-facts/little-penguin/manlys-little-penguins/where-can-i-see-them?fbclid=IwAR2Sch-m8eAXgEutyF0xNB9wp1aR0SCf2XuybiCvXrXJnTlncbLz5B-zjhs And there is also a Volunteer Penguin Wardens program where you can volunteer to observe and protect the little penguin colony in the breeding season: https://www.environment.nsw.gov.au/topics/animals-and-plants/native-animals/native-animal-facts/little-penguin/manlys-little-penguins/how-can-i-help

The route: We started at the bus stop called Spit West Reserve, Spit Rd, which was in Spit Reserve Park. We crossed Spit Bridge, went down Battle Boulevard, joined up with the path, went under Spit Bridge and then continued along the coast. In the beginning of the walk, from Contlarf Reserve park to Contlarf Point, at low tide you can walk along the beach straight to Contlarf Point. When we got there though, it was high tide and the beach wasn’t exposed. But Roxana, who had done the walk before, said that we could still totally cross through the water. So we had a bit of an adventure and waded through the water to Contlarf Point! It only reached my knees, and the water was actually the perfect temperature, it was not cold at all! Since it had just rained, one section of the trail had a lot of puddles, but thankfully it was just that one section and there weren’t puddles for the rest of the walk. Near the end of the walk, at low tide there is a section where you can cross through the rock pools. Since it was high tide, we took the alternate route, which had a walkway over a tall waterfall and a short street part before it joined up with the path again. There was a sign pointing to the alternate route before the path got to the rock pools. The route ended at Manly Wharf. The trail was very straightforward to follow, there were hardly any other trails branching from it so it so you needed to put very little thought into whether you were going the right way or not. I had read from hiking websites before the walk that the walk could take 3-5 hours, but we only ended up taking 3 hours. The walk was about 10km.

Toilets: Several along the way

Water: Bubblers along the way or BYO water

Driving info: If you park on Pearl Bay Avenue, just beside Spit West Reserve, it is unrestricted time and free!

Ended where we started?: No