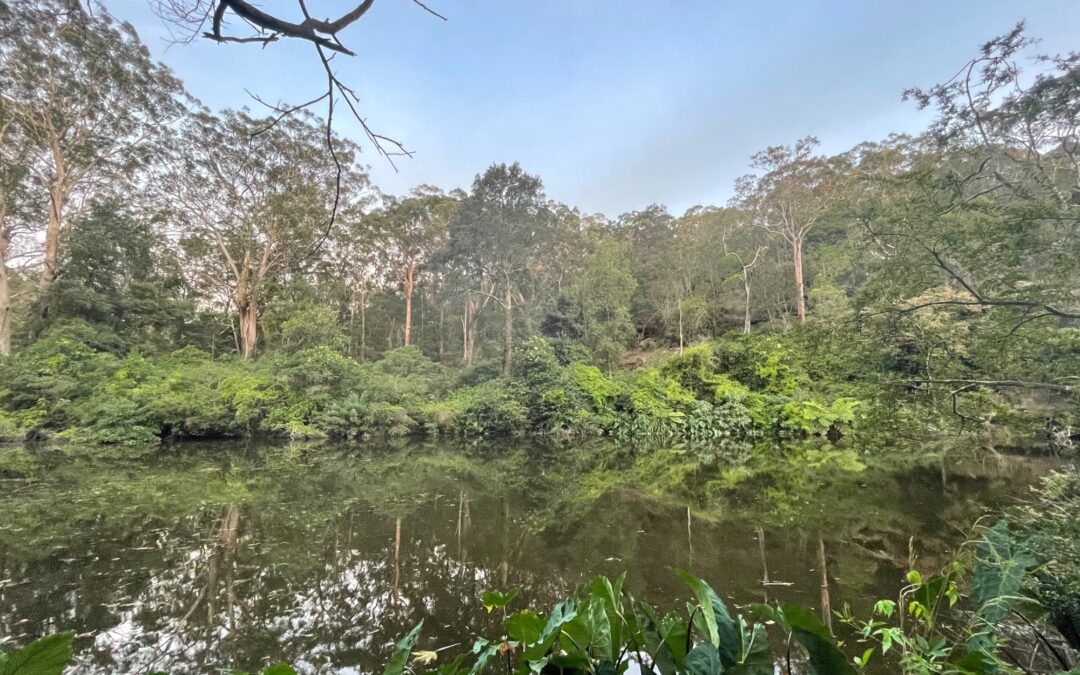 The walk today was supposed to be walking from Spit bridge to Manly, but when I checked the weather forecast a few hours before the walk, all the weather sites said that there would be a thunderstorm at precisely the time the walk was supposed to be. Since not a lot of people signed up for the walk, and the thunderstorm was due to pass in a few hours, I thought maybe I could give rescheduling a go. Since I didn’t know whether I was allowed to reschedule walks, the SUBW president Aidan was going on the walk so I messaged him and he said it was alright.

For the walk to do instead, Aidan suggested a walk that sounded really awesome, the Riverside Walking Track in Lane Cove National Park. So after the thunderstorm we all met up at Lane Cove National Park, and the walk was indeed really awesome. Aidan led the way because he was familiar with the trail. The trail was dirt and there was forest all around as far as the eye could see, so even though we were in the middle of the Chatswood/North Ryde area it felt like we were somewhere a lot more remote. It was the perfect walk to do after a rainstorm because even though the trail was dirt, there was absolutely no issues with puddles or mud. And there were picnic shelters along the walk to shelter in case it rained again, which was cool. There were tons of water dragons all along the hike, which scampered away when we got too close to them. We got followed by a bush turkey as well, we thought it might have wanted food from us. As the name of the trail suggests, it went alongside a river. The hike had really pretty, lush forest with a fern understory. There were these walls of ferns growing on giant rocks that bordered the river. Near the end of the walk we saw a rainbow! Also near the end of the walk we caught the sunset, and it made the red color in the eucalyptus tree bark pop. That didn’t show up on camera though.

The route: We all got there by car, but if people had been meeting by public transport, we would have met at the bus stop close to the start of the trail in Chatswood West called Delhi Rd at River Ave. There is paid parking in Lane Cove National Park, but there is free parking really close to the park along Lady Game Drive, so that’s where we met. The Riverside Walking Track is only on one side of the river, there is another tail on the other side of the river that is apparently much harder. Places on the Riverside Walking track side of the river include the Koonjeree Picnic Area, Lane Cove Boatshed, and the Cottonwood Glen picnic area. The trail was very straightforward to follow, there were no other trails branching from it so it so you didn’t need to put any thought into whether you were going the right way or not. We walked an hour into the park, then turned around and walked back. We took around 2 hours.

Water: BYO water. Didn’t notice any bubblers, but there might be some.