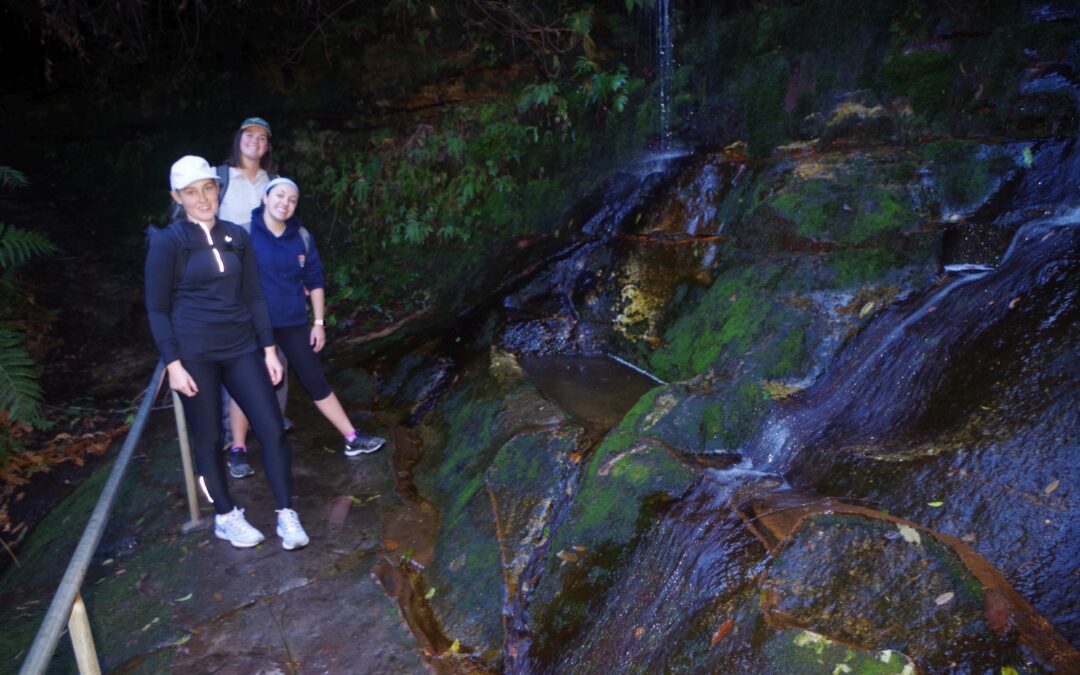 I chose Saturday to avoid a clash with Mitchell Isaac’s Navigation Walk, and also because the weather forecast looked a bit better (if colder). And it turned out to be a brilliant almost cloudless day in the Blue Mountains. Our walk is located on the west side of Blackheath which is less visited by tourists, but temporarily more popular due to track closures on the eastern Grose Valley/Govett’s Leap side. I had never bveen here before so it was also an exploratory walk for me.

I had five sign up but one pulled out because of a headache, and we met up at Central for the just over 2 hours train trip to Blackheath, which was uneventful.

At Blackheath we arrived at bright sunny weather and 5 degrees C! We had an initial stop at the Council loos which we partly on the way to the walk start (via Bundarra Road), and then started along the track which starts at Bundarra Street to Fort Rock (which can be seen on the map in photo 2). That track is a bit rough and passes over picturesque Centennial Glen Creek before arriving at Fort Rock (which is actually a small rock pagoda) atop which are great views of the Kanimbla Valley.

At this point, and as the Council’s map at Bundarra Road shows, there is no marked track to get to the top of Porter’s Pass. If you read “Wildwalks” description of this walk it suggests taking a track which skirts beside the Blue Mountains Christian School, and “Alltrails” site shows a track that bypasses the School completely. To add to the confusion a Counil sign at Fort Rock shows the track but also has a “private property” sign above it! Fortunately a local who was also there explained that the sign referred to the School which he said doesn’t like bushwalkers accessing Porter’s Pass via their School. He said that the track is a through track, so we took it. This track passes through heathland for one km along a rough track with some slippery sections but was mostly on a moderade gradient. Noticed a couple of minor side tracks (Then we can to an obvious track junction with no signage but as one track went steeply up, and the other track commenced downhill, it seemed logical to follow the downhill track. Indeed it turned out to be the start of Porter’s Pass, which was confirmed by a sign halfway down (but at no track junction; I thought it more logical to have it at the unsigned junction, but I digress).

Porter’s Pass becomes much more steeper as it descends down the gully and underneath the cliff line. It drops into a glen which would be a nice cool spot in summer but quite frigid today. Then further steep descent until reaching the start of “Collier’s Causeway”. This track is fairly level along most of it’s distance to Centennial Glen with a few undulations. It is however quite narrow in several places with some briefly exposed sections where care needs to be taken. There are quite a few muddy and squishy sections along this track too. The great views make up for it. At one spot it passes behind a waterfall.

Eventually we came to a sunny ledge which we assumed was above the track and a good spot for lunch. We were soon interrupted however by other walkers coming through our lunch spot! It turned out that this ledge was actually part of the track, even though it was a bit of a climb up to access it. We moved back a bit to be out of people’s way. After lunch we continued on and under a large overhang (see photo) and eventually came to the start of Centennial Glen. There is a waterfall and cascades through Centennial Glen, and beside those there is a narrow set of steps going steeply upward. It seems that Centennial Glen’s steps were constructed in 1888 to mark the centenary of the European settlement in NSW; that would make these steps among the oldest in the Blue Mountains. The climb up is quite steep but it is not actually that bad (Most walks descriptions go clockwise including “Wildwalks“, which I had originally intended to do, but the meeting with the local at Fort Rock mentioned earlier prompted me to do it anti-clockwise).

Halfway along the climb up out of the Cascades, we came to a short side track marked simply “Canyon” but it turned out to be a dead-end. So on up we went until reaching the junction with the lower section of Wall’s Pass. This passes just underneath Wall’s Ledge, a favourite spot for rock climbers, and at this time of day receives the afternoon sun; that was welcome after the cold conditions of the Cascades. This track runs fairly level for quite a while and is undergoing repairs with new sandstone blocks. After a while we came across several groups of rock climbers (who definitely assured us they were Climbers not Abseilers!) climbing the sheer cliff walls there. They appeared to have even more equipment than abseilers seem to carry, with safety lines and someone at the base belaying. There was a novice at one section on a short part of the cliff. (All that equipment is a reminder of how climbing and abseiling safety is never taken for granted by those who know what they are doing).

This track eventually leaves the climbers behind and after a short climb levels out to pass through heathland above the cliffs, and comes out at the Centennial Glen Road car park. It was here that there was some more confusion from the map at the car park, which seems to suggest that we would have to go back down the Cascades again. Yet none of the walk descriptions stated that. The alternate way back to Blackheath was via busy Shipley Road which we definitely wanted to avoid. So,an exploratory walk along one track took us to a lookout from where the track continued on steeply down the slope. This seemed to confirm that that way back was via the Cascades, until we spotted a track just below going at a higher level. We dropped down to the junction of this track which indeed was signposted as going to Bundarra Road (where we had started off). This track itself undulates and passes behind a couple of waterfalls along the way; these give quite a sight with the falling water catching and glittering in the afternoon sun. It is however a bit muddy in some sections because of that.

Soon enough we came to where the track turned left to go to Fort Rock and then a climb back up to retrace our steps to Bundarra Road. There was one place where the track detoured around a fallen tree (looks like it’s been there for years and I wonder why it has never been removed). Unfortunately I tripped there on an unseen sprag from the end of that tree and grazed my hand. This required a first aid stop of about ten minutes to clean and cover the wound, with a combination of our first aid kits and Rachel’s nursing skills.

This setback didn’t affect our arrival at Blackheath for the 4.09 pm train as we still had half an hour to spare. That allowed time for another loo visit as well as coffees from the Blackheath Deli which seems to be the only cafe open in Blackheath after 3.30pm. (Noticed that the “Victory” cafe opposite closes at 3.30pm despite having a sign on its window stating open until 4.30pm). Then it was back to Blackheath Station for the train to Sydney. Incidentally the V sets used on these trains are now on borrowed time despite their comfort, due to be replaced with “new” intercity trains seemingly designed for British conditions instead of for NSW. In particular they will annoyingly have non reversible seats just like on the Tangara suburban sets and the U.K. Intercity sets which have a reputation for lack of comfort. It doesn’t seem to matter to our rail bureaucrats that from way back in the 1870s NSW adopted North American style passenger car styles as being more suitable for our climate and conditions. The railway bureaucrats’ arrogant attitude has been: “it’s going to happen so get used to it. If you don’t like them then tough“. That’s despite a survey of South Coast travellers being 88% against the non reversible seat arrangements. So enjoy the V sets on bushwalks to the Mountains while you still can.

Everyone seemed to enjoy the walk (with Amy and Anne only joining SUBW a week or so ago), and we couldn’t complain about the great (if cold) weather.

My photos are below, but the Flikr link above provides descriptions for all the photos.