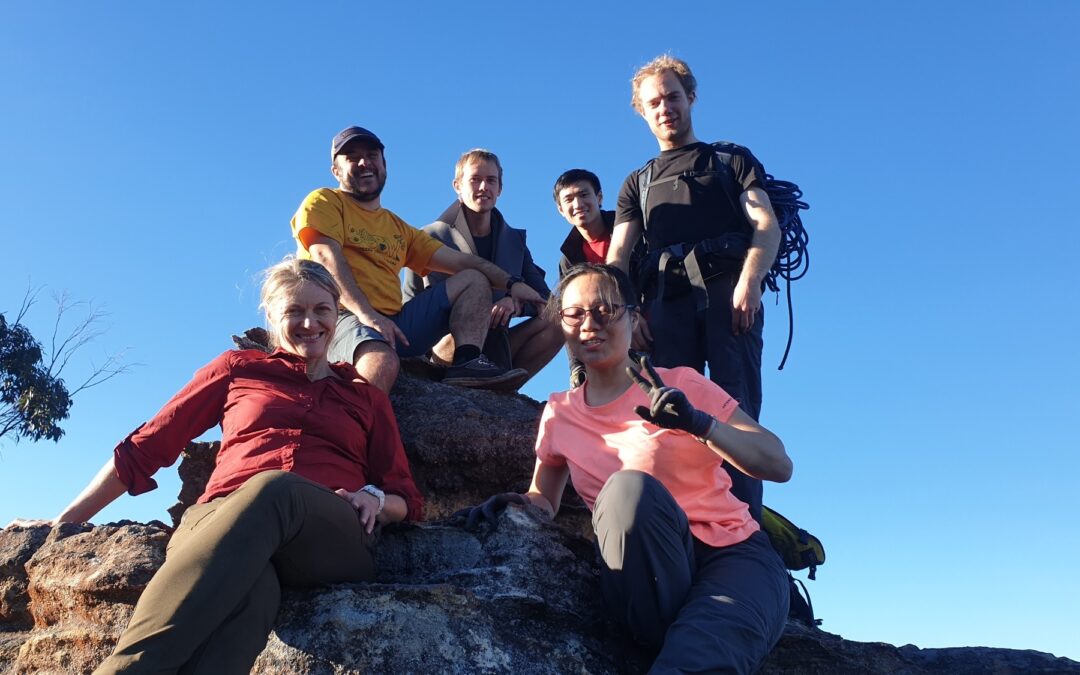 It had been a couple of weeks since SUBW’s incredible Intermediate Canyoning weekend adventure, and I was keen for more canyon action! Except- with the forecast for overnight temperatures set to -3degrees on the Newnes Plateau, I felt it was time to transition to a drier winter canyon-type of adventure.

With this is mind, 5 of us convened at Barcoo Swamp Campsite on the afternoon of Saturday 15th May, putting us in close range of Tiger Snake Canyon. Tiger Snake Canyon is a popular winter canyon, as you can stay ‘relatively dry’, and the lower constriction was even discovered by an earlier SUBW/Ramblers trip in 1977!

Huaxia, William and Aidan were the first to arrive in Aidan’s trusty red Pajero, and set about starting a toasty fire and kitchen set-up for the group.

Samantha W and myself were next to arrive in my trusty suspension-less Corolla, and did a few 3-point turns in the vicinity of the campsite, before finally recognising where we were.

The sky was clear and crisp, but the stars were out to welcome us. Aidan and his Pajero group went to gather more firewood from the nearby state forest, while Samantha W and I cooked our dinners.

The Pajero group were rewarded for their efforts with Sam’s yummy gourmet dessert, made of tapioca, mangoes and shaved coconut. After some marshmallow burning and chin-wagging, we all retired to our tents for the night.

The next morning greeted us with a layer of frost on our tents and vehicles. Luckily, most of us had brought ample warm gear to avoid frostbite. Sam W had just ordered a super warm sleeping bag online, however, this sadly did not add warmth to her set-up.

Shortly afterwards, Jeffrey arrived rattled following several 3-point turns around the vicinity of our campsite. It seems he also fell prey to the evil Google maps misdirection that we did the night before.

The 6 of us set off on the two vehicles with decent ground clearance (not mine), and shortly arrived at the carpark. After a quick impromptu ‘before’ picture courtesy of the group in front of us, we began our 3km walk in to the start of the canyon.

The first constriction begins with the option of a 5 metre down-climbing into the abyss, or abseiling down from the top of a pagoda on the right. We decided to take the latter option, noting that our ultimate anchor was from a shallow pancake-like rock feature.

Despite our best efforts to land on a thin log across the water and moonwalk over the chilly pool, we all got our legs wet. Our respective heights determining just how wet we got- ankles, knees, or thighs.

Next was a 5 metre abseil from a clump of dodgy-looking logs. The logs are wedged low across the width of the canyon, and whilst they flexed and creaked a lot more than I would have liked, they provided us with a safe descent.

A narrow squeezy section then led to a shallow ledge with a 3-metre drop. There is a sling around a tree there, but we took the funky climb down option, which conveniently utilises a tree’s root system all the way down to a wide open ledge.

The ledge signals the end of the canyon’s first constriction, with an impressive over-hanging 17-metre abseil. What follows, is a lovely ferny creek-walk. By now, some of us were feeling the chill, and we opted on climbing up to a sunny spot for lunch. After discussing the merits of investing in gambling shares to avoid tax (?), we headed into the second constriction.

Perhaps it was my head spinning from the lunch chat, as I then promptly led us down towards the abseil which the online notes specifically recommend against, due to the awkward pull-down angle.

Upon realising this, I made us reverse the short but awkward climb back out, and continue climbing over on the left side of the canyon wall. After 15 metres or so, we came to a large boulder wedged above the canyon, from where we were to complete our last impressive 25m abseil.

We waited for the last of the canyoners from the 2-person group ahead of us, to make his way down the funky single rope set up. I liked the look of his rope bag, with the excess rope neatly contained, and tried to remember what our club discount is at Climbing Anchors (it’s 12.5% ).

The start of the abseil was a squeeze with a slight overhang over the boulder, which then descended into an impressively carved narrow canyon formation. We took turns bottom-belaying each other, and walking back up the canyon section we missed, by opting for the 25m abseil.

This last section of canyon was dry, narrow, and quite beautiful. A chamber-like formation led to the end of the constriction, and in my mind, this was the spot where the infamous tiger snake blocked the path of the ‘original’ canyon crew. In any case, Aidan and I posed terrified with a snake of the edible kind.

A short ferny creek walk later, and we were ascending over to pagoda country. We stood atop a pagoda, and attempted several different poses using the 10 second selfie timer feature. Iris tried out her dabbing technique with some success. Sam W did not dab.

We then made our way back to the carpark at various speeds, and bundled into the cars for the short drive back to our camp.

Once at camp, and while packing down our tents, an older gentleman with a friend in tow approached us. He smiled and explained that he was worried about the deserted camp, and wondered if someone was lost. I was about to answer, when it suddenly hit me- this guy is Dick Smith!!! “ummm….are you Dick SMITH?!” I heard myself say.

“YEP! Sure am!”. The infamous entrepreneur threw his hand out for a shake, and I obliged (whatever COVID).

The minor frenzy drew the attention of the others, and soon enough, Sam W realised she had been taught by one of his family members, and William fulfilled a childhood dream of discussing some of his earlier ventures.

Dick was very pleasant, and let us take fan pictures with him, before spruiking his upcoming autobiography and retreating to his camp that was also set-up at Barcoo Swamp.

With a renewed excitement only brought on by brushes with fame, we finished packing, and rendezvoused at Katoomba’s Old City Hotel for some pub grub, and a delightful mulled wine.

Thank you all, for a lovely weekend of stories, food, laughter, and canyoning.