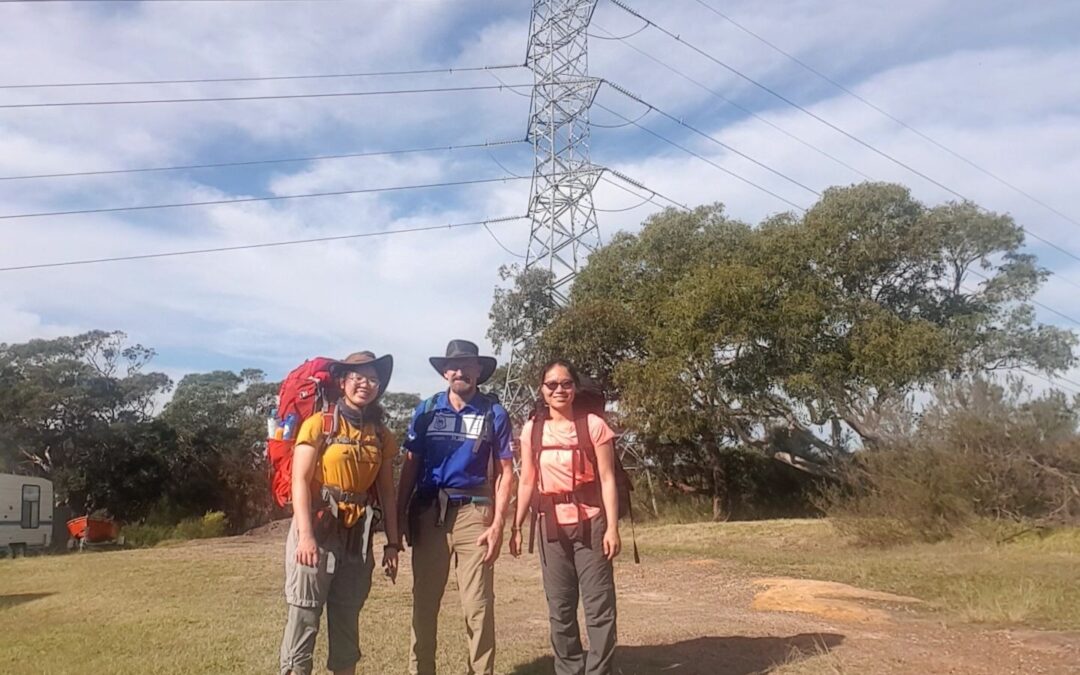 Although it was worrying that there were a lot of clouds on the way to Heathcote station, the sky cleared up beautifully at the time we gathered. After waiting for Thomas until 9:30 pm, we headed to the Royal National Park.

We started on the Friendly Track, what a friendly national park! Descending on a rocky track along the Heathcote creek, I realised that the water flow was much stronger than the last time I was here, obviously since there was quite a lot of rain during the week. We arrived at what looked like a really long pipe, indicating that we should be arriving at the Pipeline track, the pipe must has been leaked recently, since there were reparations that could be clearly seen. After some exploration around the pipe, we headed to the pipeline track. We walked pass Mirang pool, decided to look at it a little bit, and headed to Lake Eckersley. Along the way we had to crossed a submerged bridge, the water was ankle-high, but it was really cool to walk on a bridge that was underwater.

Lake Eckersley was beautiful, we could see a swing on the other side with a track led to it. I decided that we should have lunch in this amazing place. It was one of the best place to have lunch, so we took our time there before heading to Bullawarring track.

We missed the turn and went on the wrong track for a little bit, however, with the effort of three brains, we found out the turn to Bullawarring track was at the end of the bridge earlier. It helped on this trip that there were a lot of signs. We ascended for a while until we reached Mark’s lookout and had a little break there. The view was amazing. We continued on the track to Kingfisher pool, the amount of water on the Kingfisher creek startled me, it changed the track completely from the last time I was there, we had to crossed the creek! Which was something I didn’t have to do last time.

We arrived at the pool quite early. Greg decided to go for a swim but the water was so cold so he decided to call it. Instead, he joined Iris and I on a rock that had a beautiful view of the pool, small talks and snack, best way to spend the afternoon. Dinner was comfy, Iris and I enjoyed the small fire made with my alcohol stove.

We had a slow morning the next day since there was no rush to Waterfall station. Because the track was very wet, Greg ditched his shoes and walked bare foot all the way back. This trip was very nice for me as a first time trip leader, it was slow and because there was not a lot of people, I could look out for everyone more. A successful trip!