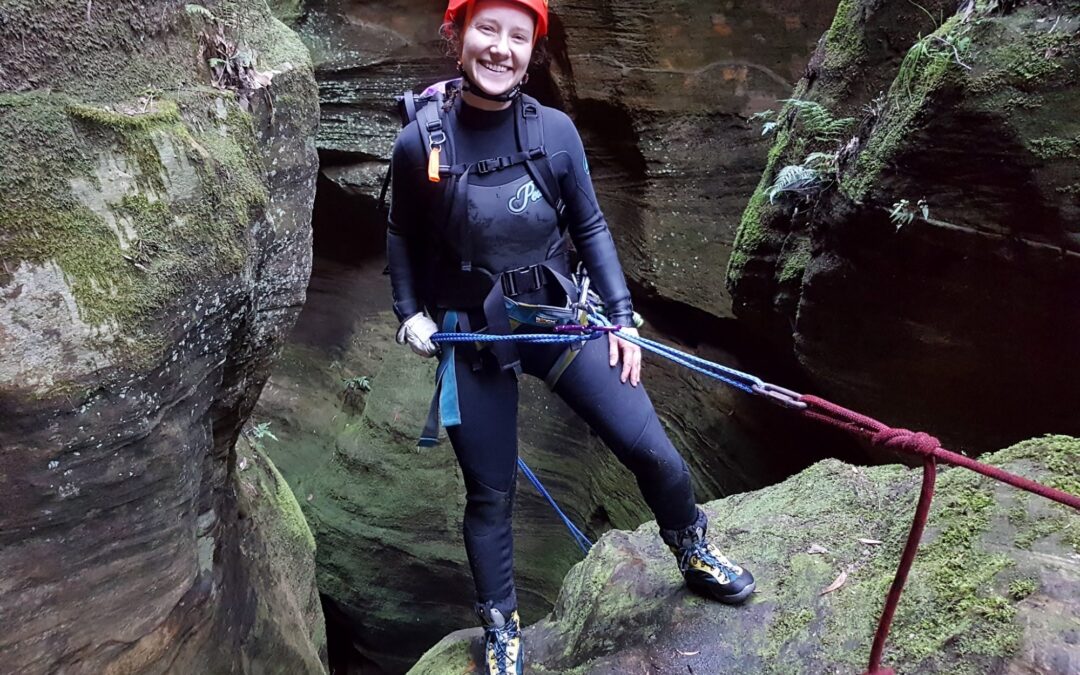 21 people arrived on Friday at the Old Newnes Hotel campsite in the beautiful Wolgan Valley for a series of canyoning trip designed to consolidate skills learnt at the Beginners Canyoning trip and Abseil Training Day. Some attendees had actually done the Beginners trip in 2019, and others were returning to the club after a few years of busy study, like ex-President Stella.

On Saturday we divided into four groups, each with two experienced trip leaders, and set off at 30m staggered starts. Group 1 led by Club Secretary Sam ably assisted by Marty did Devils Pinch Canyon before reversing Starlight canyon. Group 2, led by President Aidan and Joel, did the same. Group three, lead by Club Treasurer Sabs and Dean were unsure they would have time to do both canyons because of the late start, but in a heroic effort managed them both and got back only just after Group 4, led by Walks Secretary Paul and Geoff, which was a beginners group and went slowly through Devils Pinch concentratimng on safety and skills. Everyone was back at camp by 7.00 to find the outdoor Pizza oven fired up and ready to go for a very enjoyable and social Pizza Night. On Sunday Aidan, Sam M, Steph, Sabs and James took on Nightmare canyon while the rest of us did a bushwalk to explore the Glowworm Tunnel – the old railway tunnel left from the disused Newnes railway – and had a great lunch overlooking Donkey Mountain.

A detailed trip report from one group:

Decisions late Friday night meant a 7.30am start for us as we volunteered to go as the first group, in the hope of allowing more groups to reach Starlight as well as Devils Pinch. This was a perfect start time for the red-breasted coffee warbler.

The walk uphill on the pipeline track was definitely as steep as I remember. We reached the creek from the side of the creek, to which we heard the group behind us not too far away. We reached the point where we put on our wetsuits and decided to let the group behind us in front. Sam and Marty went to rig the first abseil for the next group. And then it was a waiting game. We bumped in to the 1st group just as they were pulling down the rope from the second abseil, which was perfect timing.

Devils Pinch was definitely a challenge in parts, especially with some freshly fallen trees choking the canyon, requiring us to manoeuvre through a very squeezy section of thick branches and leaves. The group managed to quickly move through the canyon and reach the group in front at the exit of the canyon. We had a relatively leisurely lunch before we moved off towards starlight. Starlight was spectacular, we only just entered the constricted section of the canyon to the point of darkness and glowworms, as we could hear the bat population not too far away. A huge shriek came from Sam M, due to a bat flying almost into her face. The shriek was loud enough to scare the red-breasted coffee warbler out of the canyon and away from the bats. Marty, Sam M, Jin and Iris remained a little longer admiring the wall glowworms. We made a swift exit to utilise as much daylight as we could. We bumped into the third group not too far from the exit of starlight at 4.20 pm, told them they could make it to the constrictions 30 mins each way if they moved quickly. The scrub bash down from starlight was much worse than I remember, full of weeds post fires. We worked as a team to get down to the bottom; it was a relief as we caught sight of the river! Sam (W) found a quick scramble route up to the fire trail. We worried about the third group getting down through the weeds in the dark, and Marty subsequently made some of the loudest Cooeees of his life. Sam M tried to Cooee as loud as she could, but could not match Marty. We heard no response, and were seriously worried that they had not made it yet to the exit of the canyon, which was line-of-sight from the fire trail at that point. We continued walking to the end and reached the 4th group (had done just Devils Pinch) who we had been in contact with over radio earlier. It was fast walking along the fire trail and we contemplated how we would get the 3rd group back to camp without them having to do the extra Kms on the road. It was decided that we would leave a headtorch shining on a radio to get them to call in so we could pick them up. Luckily, it was not needed as they had made super speedy time with them arriving not long after the 2nd and 4th groups.

The walk up the pipeline track was tougher the second time that weekend. With a quick lunch break and change into wetsuits for those wearing them, we started rigging the first abseil at 11.45 am. It was an awkward scramble down to the first abseil. The first abseil could have contributed to the canyons name, it was very squeezy and an awkward start. We think you could have abseiled in a little further down on the west side of the creek. The canyon was very vertical with many abseils, some with very little standing room between. Of note, one of the abseils, Sabs got very excited and abseiled down without his pack! Sam then abseiled next and load-tested the tree anchor with her pack containing a 60m rope and Sabs’ pack secured by a carabiner to the front of her harness. There was also a beautiful abseil with a log covered in fungi; each canyoner managed to gracefully avoid destroying the fungi! We even managed to avoid damage during the rope pull down. It was a wonderful day, with the final abseil being the most spectacular. The way ack was much more pleasant than the day before, with a scramble to the pipeline track, avoiding the thick weeds below. Sam, Aidan and Sabs grabbed Thai in Blackheath before the long drive back home.