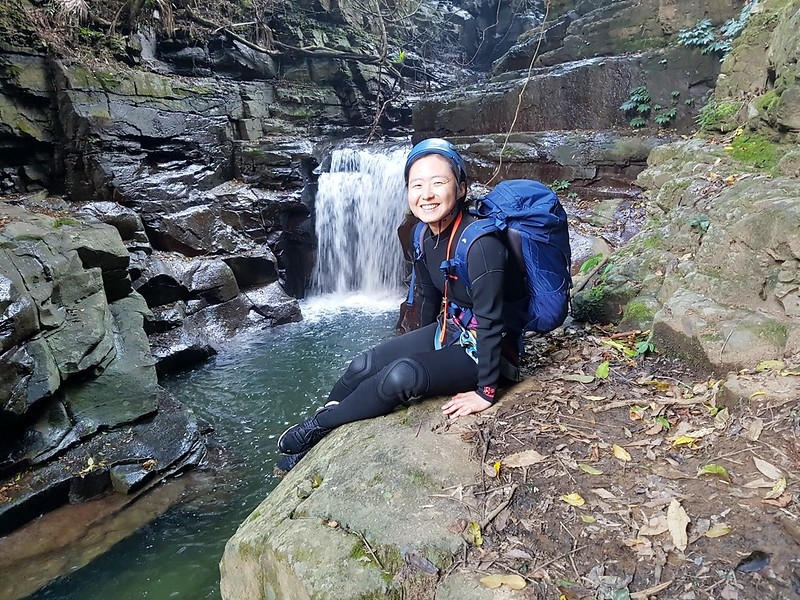 Having checked the weather report for once, I knew it was going to be a beautiful day for learning how to abseil. I packed my bags the day before after work (saving myself much frantic last-minute scrambling) and made it to Lidcome Station where Iris was kind enough to pick me up for a ride over to Macquarie Falls.

The drive over was idyllic, with Princes Highway passing over lush countryside and glimpses of the coast in the distance. We met up with Adam at the carpark before the trail started and got into our gear as people slowly started to arrive – it was a bit of a puzzle trying to fit all the cars in the small area! Once everyone was changed and ready, Paul called us together to divide up the extra gear (ropes, safety equipment and gloves) into everyone’s packs and showed demonstrated how to make a rope backpack on Laura.

Soon, we were off to the Canyon, though not before we all got into our abseiling gear. The weather was perfect and the path had many interesting critters and animals (including an adorable lyrebird), but sweating it out in a thick wetsuit is never fun! It was the start of a day of extremes.

We made our base of operation on the first abseil we would learn from and dumped all of our stuff on a flat area of rocks.

Then, before the real fun, we had to learn safety and the basics of abseiling with an acronym to check-list of things to make sure is secure and well:

Once we double checked all of that, we were off. Grace, as the bravest and toughest of us beginners (query whether she can still be counted as a beginner anymore) was the first to lead the charge and show us how it was done by disappearing down the ledge with as much grace and confidence as you would expect. After hearing her yell “off rope!” once she disappeared off the ledge, it was my turn.

After feeling extremely nervous for the first 5 seconds, I realised it did not feel too much different from being on a rock-climbing wall, the adrenaline kicked in, and I managed to stumble my way to the end of the first ledge of the day. Once we got to the end of the first abseil, we had Sabs teaching us how to “bottom-belay.” In case the belayer makes a mistake, the belayer at the bottom of the abseil can yank the rope to pull the rope taut and stop the abseiler from falling.

Meanwhile, Marty and Grace were off preparing the next abseil, and we quickly discovered that there were no anchors where they usually were, so we would have to use a slightly lower fidelity method to get down: looping the rope against a tree. It took several tries to get the rope even, but eventually we were off.

The second abseil was substantially harder than the first, with rocks and gushing water making it much trickier to balance. Once again, we had Grace showing us how it was done. Wentau went next, and like Grace, cleared the abseil easily. This was a challenging abseil to bottom belay as the bottom belayer would have to stand in the freezing water, but it was my favourite of the day: challenging, but fun. Once we arrived at the bottom of the ledge, however, we noticed that Grace had a tooth missing! Sabs was kind enough to take her an emergency dentist, and luckily, no tooth was permanently missing.

After we made our way back to our bags, we had a nice but very belated lunch at around 3pm.

The next two abseils were a bit further up the canyon, and we had to do a bit of scrambling to get to the top. The views were just as gorgeous as the morning, and we were keen to get more abseiling done.

The third abseil was fairly straightforward, though made a little terrifying due to the sheer drop.

It was the fourth, and last abseil of that day that truly got my blood pumping. It was only a small drop – couldn’t have been more than 6 meters altogether, but there was nowhere to stand, and the rocks were slippery. Once the gushing water hits your face, all thought processes stop and the world is reduced to white noise and a primal survival instinct to get out of a situation alive: Paul’s words were running through my mind then – “lie on your back, swim like an otter, get out of the carabiner.”

Words that will follow me to the next SUBW trip, I am sure.