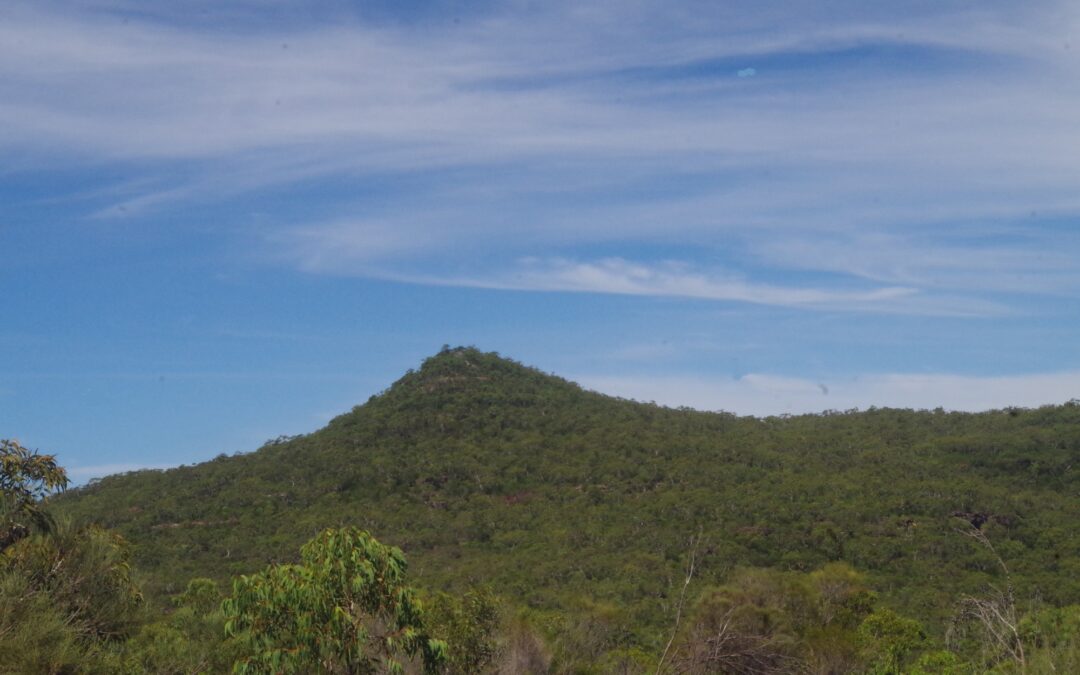 Most of us met up at Wondabyne Station to cover this interesting section of the Great North Walk. Initially there was some some puzzlement from a couple of people

at the very small size of Wondabyne Station (which is why you must ride in the last car to get off there). There we found out that Bingtao had missed the train and had caught the next Newcastle train to Woy Woy and would try to catch up with us later (which he eventually did). After posing next to the snake warning sign (see photo), we five set off up the steep gradient to the top of the ridge above Wondabyne. This is the steepest part of the walk. Once on top, and after a short water break to recover from the climb, we continued along the now wide fire trail which if you continue straight along it ends up at Girrakool. We hoever turned off it on the narrow and rough bush track which leads to Myron Brook and Kariong Falls. Not far along the track wqe came across some carnivorous plants (Sundews), although they did not put on as good a show as others we came across much later on.

This track passes across some of the large sandstone rock platforms typical of this area, and here we heard and then saw a pair of Yellow-tailed Black Cockatoos. Soon the track starts to descend on a quite rough track down to Myron Brook. . In fact it is more like rock hopping than a track, with some tricky sections. Myron Brook was running quite strongly after all the recent prolonged rain, and had a decent waterfall which is normally just a trickle. The pool below the waterfall was mostly covered in foam, which is not from any domestic source (there are none upstream); instead it comes from the natural organic matter for example the oils in Eucalypts, that in a heavy rain will separate from the plant material and enter the water. To cross Myron Brook meant putting at last one foot in the water, but it had to be thus.

After Myron Brook it is just a short distance to Kariong Falls and Pool. On the way we came across a couple who said that they had seen a small Brown Snake on the track on the other side of Kariong Falls. Like Myron Brook, the Falls at the Pool were running strongly. Indeed the logs that normally serve as seats for morning tea in normal times were mostly submerged in the overflowing pool.That meant that it was ruled out as a break spot, but we did manage to get good photos of the watefall. After that, we started on the next steep climb whic eventually comes out at the fire trail from Staples Lookout. Before then (and looking out for snakes) we came across a handy shaded rock shelf which made a good spot for a break. Lamingtons and other sweets were passed around.

After this break we came to the Fire Trail called Thommo’s Loop Trail which later on connects up with the Woy Woy Tunnel firetrail. Normally this section is dry and easy to walk, but the recent heavy rains had put several sections of the fire trail under water; indeed at one place Kimerley measued the depth at half a metre. That meant an impromptu bush bash to get around it (and it also meant passing a normally tiny creek which was also overflowing). Soon however we were able to detour off the fire trail onto a proper bush track, but still with some waterlooged sectiosn. About halfway along Mount Wondabyne comes into view and also a rock platform with Indigenous tool sharpening grooves in the rock. This is also Tiger Snake country (they like hunting frogs) so a lookout was always needed. AS it turned out the day was starting to warm up a lot by then and we saw very few reptiles: just a few skinks. The snakes had probably headed for some shade.

The bush track comes out at Mullet Creek Fire Trail which ends up at the Sydney end of Woy Woy tunnel. A short wal of 200 metres along it took us to the start of the track up to Mount Wondabyne. After discussion people had decided to opt for an earlier bus at the end so we gave the 2km return walk to Woy Woy Tunnel a miss. The track to Mount Wondabyne goes through mostly open heath and provides almost no shade. It is rough and steep in a couple of places. Halfway along these is a National Parks Service logbook which we filled out, and it was interesting to not that ours was the first entry since 10th March. I suppose the very wet weather in the meantime had deterred other walkers. It was here that Bingtao eventually caught up with us.

On we went to the short side track to Mount Wondabyne itself and we climbed up and found a shady lunch spot only a few metres away from the summit, but with views both to the sea and the Blue Mountains, which on this day could be clearly seen in the far distance. Also, although the walk along the track earlier had been somewhat warm, a cool sea breeze came up, and after a while some clouds too.

Mount Wondabyne is for all intents the end of the bush section of the walk, as after this there is only another 100 metres of bushtrack to reach the next fire trail, and from there on, the walk continues along various fire trails until reaching the entrance gates of Woy Woy Tip about 3km further on. Thewre is little shade along the way too. Still, there was a surprise along this section as we discovered more carnivorous plants where the fire trail passes by the edge of a hanging swamp. These ones appeared to be larger and more numerous than the ones we saw back near the Girrakool fire trail.

We eventually came to where the fire trail enters a more forested area,but soon after we came to the gates of Woy Woy tip. These gates are always accessible to bushwalkers via a narrow gap to their left (as also with a second set of iron gates further along). From here on it is a 1.5km road bash along a tarred road without any footpath and a quite narrow verge, so we had to take care of oncoming traffic which often don’t heed the 40km/hour speed limit there. Thankfully we were able to get off this road at Shoalhaven Drive where it is just another 300 metres to the bus stop on a side street called Nambucca Drive. We arrived with 20 minutes to spare before the bus came, in which time more lollies were passed around. The bus took less than 10 minutes to reach Woy Woy Station, and 20 minutes until the next train to Sydney.

Everyone seemed happy and we were lucky with the weather too. There wre no “no shows”, although Wentao signed up for the walk at 9.45pm the previous night, and I didn’t see his email until I checked just before closing my computer at 11.30pm. I figured that Ihe probably not get my response about travel arrangements in time, and in fact he decided to do the walk himself on the Sunday instead.

There are a few photos below but there are many more in the two links given above.