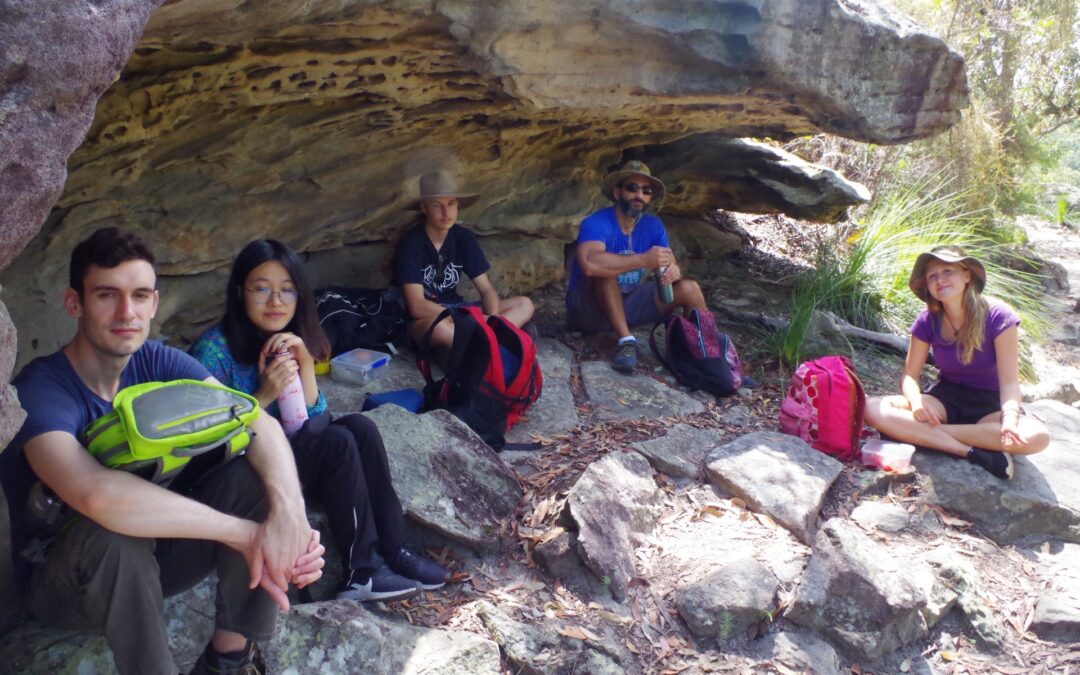 With the forecast looking like a mostly sunny day with temperature of 26 degrees C, the weather looked promising for this walk. I Included in my pack a packet of Lamingtons ($2.50 from Woolworths), and a litre of staminade as well as hot water for coffee and more plain water. The first two proved to be very valuable additions as we found out fairly early into the walk.

I had 8 people originally sign up, but 2 withdrew for health reasons that morning. Jenny (Junrou) had missed her connecting train by only two minutes as trackwork on the Illawarra Line had mucked up the timetable, and also added 20 minutes to trips on that line. I figured that as there is usually 10-15 minutes used at the start of a walk, I could afford to allow her to get on the next Cowan train an hour later, and she could catch up with us when we had a break at Jerusalem Bay, which is 45 minutes from Cowan Station. Meanwhile though, Georgina had overlooked the requirement to be in the last four cars of the train at Cowan, and got carried on to the next station, Hawkesbury River. She was very lucky though as there was another train due into Hawkesbury River just 3 minutes after her train got there, and it would take her back to Cowan (and it was a 4 car train so no mistakes that time!). That added another 25 minutes to our wait time at Cowan, so that Jenny would catch up with us in less than half an hour at Jerusalem Bay (which she did). Meanwhile at the Bay we met up with a couple of former members of SUBW who remembered me, and also knew Andrew Cox from the 1990’s period in SUBW.

After Jenny caught up with us, we continued along the track past the shady section of the glen at the head of the inlet, and then commenced the relativey short but quite steep climb to the ridge top above Jerusalem Bay. 300 metres of elevation are gained in quite a short distance. After the steepest section we had a needed water break, and I got out the Lamingtons to provide extra “fuel” for the remaining section which was thankfully a bit less steep. Then Jenny said she was feeling a bit “off” and light-headed. So I gave her 4 lamingtons and a cup of staminade as she might have been not drinking enough and had some loss of electrolytes too. It made her feel better and we continued on. At the second stop once the track had levelled out Jenny was still feeling not 100% but as the worst of the climbs were over now, we considered it safer for her to continue to Brooklyn even though she could get back to Cowan in just over an hour. We didn’t consider it wise for her to return to Cowan by herself if she was still feeling off. By continuing on we could keep an eye on her even if it meant slowing down.

Fortunately the next section of track was level and then dropped down to a shady section to cross Campbells Creek. Noted berries from a Lilli Pilli Tree there although they taste very astringent if you try to eat them raw. From Campbells Creek the track rose again although not as steep as the first climb. There are a few places where it levels out, then rises, repeated 3 times. We came across a hive that European honey bees had made in the hollow of a gumtree. We left it alone. After another 10 minutes and another gradual climb I spotted a small rock overhang which would make a suitable lunch spot, with shade and a sea breeze blowing in.

After lunch we continued along the next section with a last climb which includes a mini “Taros Ladder” (see photos). From there it is just a few minutes to reach the wide fire trail/railway access trail to Boronia 2 Tunnel (although to get to Brooklyn you turn right and not left to the tunnel). Just before we got there, there is a NPWS log book which we signed. The wide fire trail continues along for quite a while for over 2 km, of which the first 1km is in heathland and provide almost no shade. We could feel the heat coming from the trail surface. After about another 1 km it becomes more shaded (at this time of day anyway which was after 2pm). Just where the trail starts to wind down the hill there is a rock shelf to the left which gives a nice lookout over the Hawkesbury River and Long Island, and the road bridges. Mt Wondabyne can be seen in the far distance. We had a short break at this view spot (which offers only partial shade) and Georgina asked if the snakes found here were poisonous. I told her that the World’s second and fourth most venonous snakes are found here (Common Brown Snake, and Tiger Snake). And pythons, which are not venomous.

After the break we continued down the trail until reaching a point where a vague side trail goes down the hill. I have used this before but wary of using it in warm weather in case of snakes hiding along it. This time it looked like it has seen a bit more use and looked more clear, thus enabling nasties to be more easily seen. I have wondered why it is there, as it is dead straight along its 330 metres and maybe was cleared for a pipe of similar underneath in the past. It is rough in places but not a major obstacle. It also cuts off a kilometre of the trail, and that was a time saving that came in useful very soon. Incidentally it is shown of Google Maps as a pert of the Great North Walk, which it is not.

This shortcut ends at a lower loop of the fire trail, and a short walk to the left for a few minutes took us to Brooklyn dam track and the clearing next to Brooklyn Dam (it was originally buolt to provide water for steam trains coming up Cowan Bank from Hawkesbury River). Some people do swim in it but I would not trust the water quality and definitely not drink it.Here we had another water break in preparartion for the last climb along the fire trail, which, being a fire trail, is much gentler than the previous climbs on the bush tracks. I asked who was interested in going to the pub when we got to Brooklyn and who wanted to get the first train home. Jenny wanted to get the first train, and that was a good plan considering that she was still not 100% well. We only had 40 minutes left to get the 4.03pm train (and another 40 minutes drinking time to the 4.53pm train for whoever was going to the pub). So we set off immediately, but we didn’t attempt to rush, as I knew from past experience that we could make the earlier train in time by not pushing it, as long as we went down the old track at the end and not the concrete section which the “official” track now goes down (and is over 600 metres shorter and avoids the 100 metres of Railcorp concrete road at the end which is slippery in wet weather).

This old side track, which is the original track and rougher than the “recommended” track, is reached after about 1.5km and marked by a sign stating “Brooklyn Station 1.3km” (it’s actually 1.3km to the pub, not to the station). Here we turned left onto the old fire trail which after a short distance goes along a rough bush track for about 100 metres under power lines before regaining the old fire trail (the bush track cuts off a loop of it). That was not before a very brief detour along a better looking track which turned out to be a dead end, and Georgina walked into a spider’s web, with spider hastily retreating away from the intrusion. In fact there were another two along this short track, which we removed by waving a stick through them. Of course the other possible hazard on this little used section could be snakes, but we saw none. We continued along this old fire trail until seeing a large rock overhang on the right and an old rotting signpost on the left. This is the start of the final bush track with winds down rather vaguely to reach Brooklyn Road. By the time we reached the road there was just 6 minutes left until the next Sydney train for

Jenny, but the railway station was less than 5 minutes walk. Conrad opted to join Jenny to get this train,and I walked them to the station to see them off, and then returned to the pub to rejoin Jack, Georgina and Leonard for very welcome beer and ciders.

After a nice long break in airconditioned comfort we left for the station and both our trains arrived at the station at the same time (I was headed north). Everyone seemed to enjoy the walk, and the weather althugh very warm was not too hot. I give credit to Jenny for sticking to the walk even though not feeling the best. Incidentally I would not recommend using the old track that coms out at Brooklyn Road unless you are very good at navigating as it is becoming vague and too easy to take wrong turns at both ends of it.

All my photos are below, but if you click on the link above you will get descriptions of what’s in each photo.