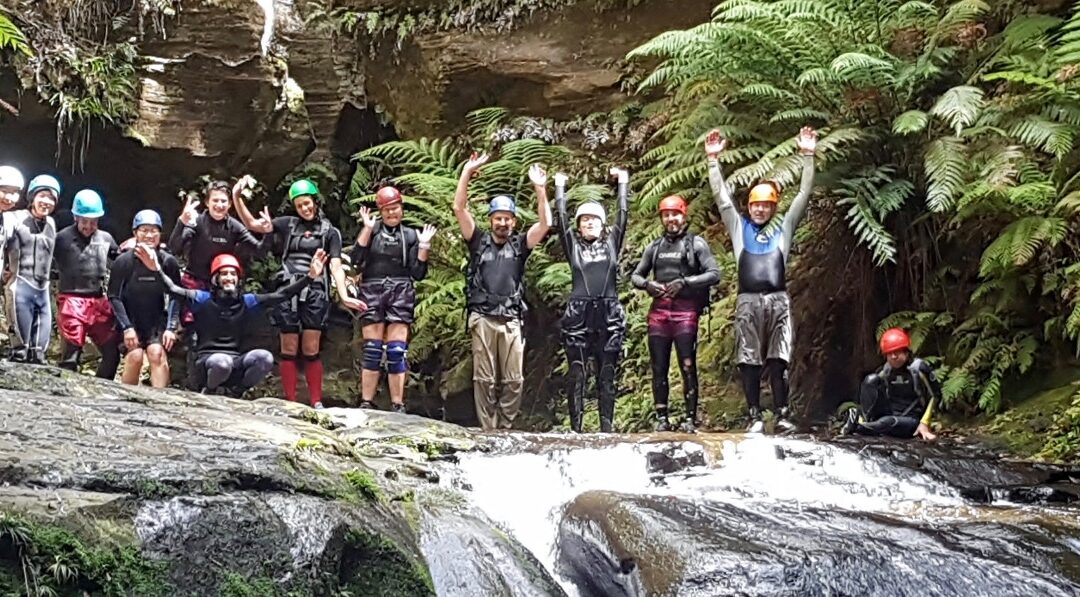 Disconnect from the obstructions

The of this canopy pleads

Unweave the wired that bind

Another way to be

From the 5-7th of March SUBW ventured out on the Beginners canyoning trip. This was my first trip with SUBW. I wrote my list of things to pack, ventured down into the Cage for gear night and collected all the necessary items.

On Friday night I was collected from Strathfield station by Sunil. Stepping into his car, which he’d lovingly nicknamed Cullen Bullen (after the village in NSW), I quickly noticed his boundless enthusiasm.

In Katoomba I swapped into Pauls car and met Laura. We arranged for Sunil to follow us to the campground. At one point we were in the midst of some interesting conversation when we realised that the shining lights from Sunil’s car were no longer following us. Leaving no camper behind we turned around and began the search.

The winding roads and pitch blackness didn’t make things much easier, but we persevered. Suddenly we saw a flicker of light from around the bend. HOORAY! The two cars were once again united.

We arrived at Barcoo Swamp campground at some unruly hour, but it was ok! Despite any residue tiredness and slight concern for the safety of those in Cullen Bullen I was immediately put at ease by the fire that awaited us and the lovely group of people that welcomed us in. We quickly set up our tents, ate a snack and after some chats headed to bed.

The serene bush sounds, and crisp cold morning air woke me up at around 6am. The morning atmosphere at the camp was cheery as we drank hot coffee and munched on hot cross buns. After breakfast we started preparing for the canyoning adventure ahead. With our precious cargo (lunch) stored safely in our dry bags and our wetsuits on we piled into the cars and were off. We reached the start of the walk.

My $3.00 K-mart shoes held up very well against the steep and rocky terrain. We reached the start of Twister Canyon. In all honesty I had no idea what to expect but as we slipped through small passageways, it became clear that we were in for something special.

The canyon was absolutely stunning. The first few manoeuvres weren’t challenging but then we reached a jump. I felt the anticipation building in my chest and the prickle of excitement and terror in my fingers. But my fearful hesitation quickly disappeared when the youngest of the group confidently jumped off the rock. If he could do it so could I. and with that I stepped up to the edge and leapt off, yelling a quick GERONIMOOOOO before plunging into the freezing water. Adrenaline rushed through my body and I could feel my heart pounding. Our group continued to slip, slide and jump down the canyon. Watching my new friends jump off the rock ledges and into the water was almost as fun as doing it myself. A tangible thrill was buzzing in the air.

Before descending the second Canyon of the day, Rocky Creek, we had a lunch break. I eagerly unfolded my dry bag, keen to see if everything was in fact dry. To my delight the bread roll, hummus and carrots sticks hadn’t been touched by a drop of water. We all sat happily devouring our food and scrambling to stand in the spots of sunlight to warm up.

And feeds the viridescent ferns

Rocky Creek was next.

This canyon differed to the first as it included longer stretches of swimming. We reached a beautiful glen with a large rock that we could either slide down or jump off. My mind immediately raced back to the endless days that I’d spend as a child at the swimming pool, mustering the courage to leap off the 5m diving board. This was natures wet and wild.

After traversing back up the canyon we started the ascent to the carpark.

Little white and yellow flowers were spotted over the mountain side and swayed in the breeze. For a moment I stopped and listened. Silence. Gentle silence rolled through me and over the hills. Continuing the climb, I reached the others in the carpark.

Everyone’s faces had that happy triumphant gaze. We returned to the campground, strung up some rope and hung up our wet clothes. After relaxing for some time the group decided upon an afternoon walk near the Glow-worm tunnel.

We went via the old railway line – Glow-worm Tunnel Road – and hopped off just before the Newnes number 1 Tunnel. We walked through Dry Canyon and made our way up to some pagodas. As the sun set, we looked out over the Wolgan Valley, Donkey Mountain and Emirates Resort.

We then returned to the canyon in the hope to find glow-worms.

Yet in the blackness

Tucked in the silent folds

Of a moonless sky

While sandstone crevices hold the precious

We drove back to camp and were greeted by a warm campfire and two new members of the group (who were joining us of for the Sunday). In our hungry state we all went about preparing our dinners. Camp stove fires were lit, water boiled, and Emily’s dehydrated spaghetti bolognaise was re-hydrated. After eating our food David pulled out a packet of marshmallows and we roasted them over the fire. There was some serious debate about the best way to perfectly roast a marshmallow*(see instructions below for the decided upon method). Then with full bellies and happy hearts we headed off to our tents.

Sunday morning arrived with the sound of twittering birds and cool dew. I could hear the happy chatter of people preparing breakfast. Sure enough pancakes were being flipped and tea was being brewed. The decided upon adventure for the day was a walk through the River Caves canyon.

We packed up the campsite and were off!

The legendary Cullen Bullen (Sunil’s car) was experiencing some … technical difficulties. The cat converter had fallen off and the exhaust pipe had snapped. But Sunil ever the optimist was in full bush mechanic mode and managed to sort things out. And then we were really off!

Our convoy of cars exited Barcoo Swamp for the last time and drove over the dirt roads towards River Caves. We pulled up and began our final walk. The canyon was magnificent. Its walls arched up above us like long arms hugging the air. Splishing and splashing we made our way through the shallow water. Stopping at a long log for lunch. Marty and Jenn kindly shared some of their food with me, as I’d left mine in the car. We bumped into a group who’d gotten lost further up the mountain. In that moment I felt lucky that I was with a group of such experienced bushwalkers, as without them there was no way I would’ve known which way to go. Continuing on, we climbed up a steep hill and finally made it to the top. Crashing through the dry bush and accidently walking through some spiderwebs we made it back to the cars.

We hit the road, agreeing to meet up at Zig Zag railway for a final goodbye. We drove down Glow-worm Tunnel Road which Paul described as the spine of the Wolgan Valley with many smaller roads branching off it. I watched the eucalypts whizzing past in green and bark blurs. The new growth after the fires wound up around the trees. In the silence and the untouched wild, life was regenerating. Young leaves were beginning to unfurl clinging to the dead bark of burnt trees. Verdant vines unravelled and stretched up to the sun. A soft quiet reclaiming and prevailing of life was unfolding.

Slowly in the hush of the day

And silence of night

It lives and stretches

We reached zig zag railway and said our goodbyes before journeying home.

As I sat in the back of Pauls car I reflected on the weekend. The serenity of nature and the kindness of people were the first two things that came to my mind. I smiled to myself thinking about the generosity of those who were on the trip. Generous with sharing their stories, knowledge, time, patience and of course food. The sense of community in this group was so strong and I can’t wait for future SUBW adventures.

1. squish marshmallow onto a stick

3. Wait for outside skin to become quite burnt

4. Pull off layer of burnt skin

5. Put it back in fire for a shorter time until perfectly golden brown