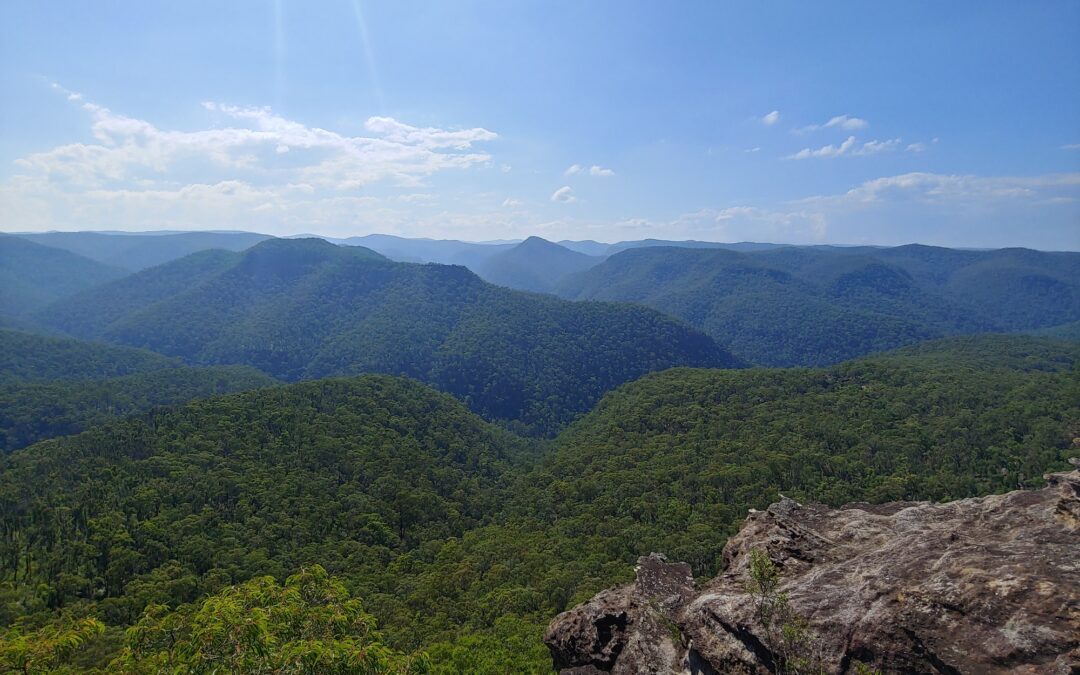 I drove up to Mountain Lagoon with Laura and Wentao, where we met Michael. We then piled into my car and drove to the start of T3 track, with the hike beginning at 9AM. We headed off down T3 track surrounded by mist, which blocked most of the views.

We arrived at the river to find an American man who had just spent the night, we told him about our trip and he told us about his. He was quite enamoured with the Colo gorge, as were we.

We then made our off-track ascent up onto D’Arcy Range from the river, which involved some rock scrambling and was rather steep.

I made sure to stay at the back of the group to make sure nobody was left behind, I also made sure to breath very quickly and deeply to check for foul air.

We then made our way along the ridge to being the ascent of Mt-Not-D’Arcy. The ridge was much scrubbier than expected, which I attribute to the unusually rich soil found along the ridge. It is dark, rich soil more akin to what you’d find at Mt Wilson than near the Colo. I wonder if this ridge is made of something other than sandstone, perhaps basalt? I took no photos of this area as it was hard going. There was also an overabundance of large spiders, to Laura’s delight.

The ascent up Mt-Not-D’Arcy was steep and rocky but very doable.

At the summit of Mt-Not-D’Arcy there were some stellar views of the Colo area.

We then descended Mt-Not-D’Arcy swiftly, keeping the time of day in mind. We traversed the ridge for a few kilometers and then descended to some cascades in Tootie Creek. Laura and Wentao in their eagerness to resupply water descended faster than me and Michael, however they veered slightly off the intended route and took a rougher way down. We arrived at the creek at approximately the same time, with Laura having a few new scratches.

From there we swiftly ascended the far ridge back onto T3 track and returned to the car, arriving at 8PM. We were treated to a blood-red sunset on the return walk along the ridge. The whole walk took 11 hours with no overly long breaks. Michael then drove home and I drove Laura and Wentao back to Glebe, with a brief stop at Maccas for dinner.