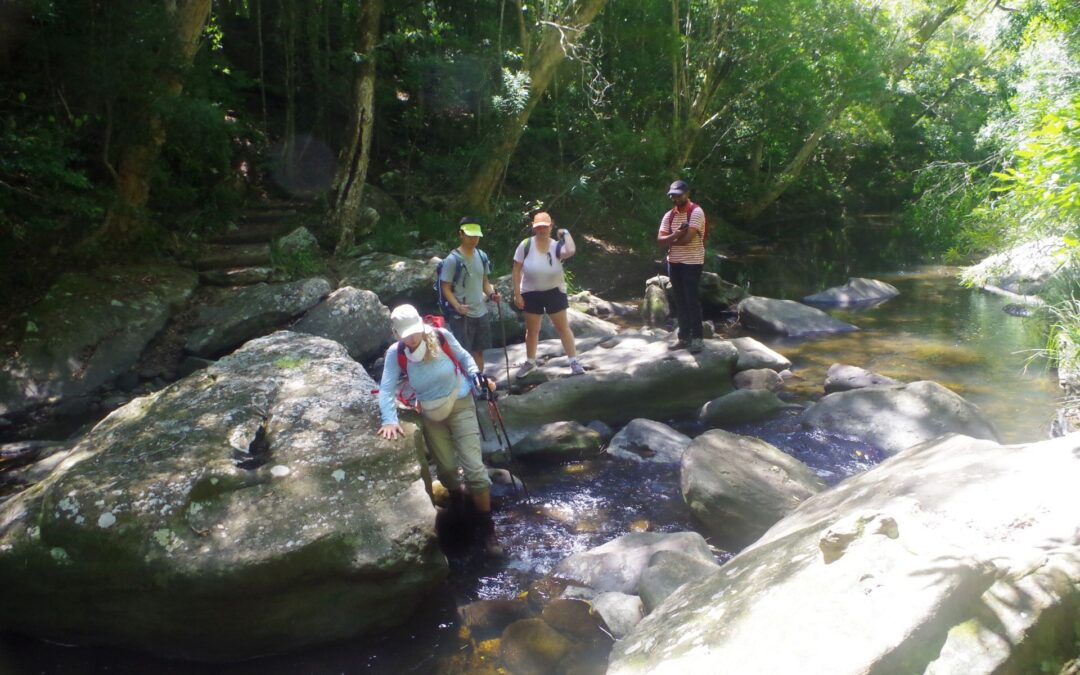 The last (official) day of summer was an appropriate day for a walk that included a beach. The weather, sea and tide forecasts all combined together on this day to ensure that a walk to Figure 8 Pool in Royal National Park was possible.

The lower than normal numbers on this walk may have been the result of past planned trips to Figure 8 going no further than Burning Palms Beach due to rough seas making a walk furter to Figure 8 too risky. This time though I was certain that it would be a goer, with a very low tide at 4.30pm and a slight 0.9 metre swell. The NPWS Figure 8 advice site also confirmed this https://www.nationalparks.nsw.gov.au/things-to-do/lookouts/figure-eight-pools Indeed we were very lucky as just two days later (2nd March) the seas have become rough with a 2.7 metre swell, and even with a very low tide, that makes walking to Figure 8 Pool quite dangerous.

The 4.30pm tide time also meant a much later than usual start for this walk. Most of us met up at Central Station for the 11.29am Kiama train which got us to Helensburgh a bit late at 12.30pm (late running seems normal for the cinderella South Coast Line). After the usual toilet break at the ststion, I led the group to look at the waterfall on Wilsons Creek near the railway. It wasn’t running very full, and that also meant that the Hacking River, which we would ford later on, would be easy to cross. Unfortunately my camera’s flash failed to operate at the Falls, as apparently the very bright reflection off the water stopped the flash, so I could omly get dark outlines of the walks members there (I am presently using an older computer with Windows 7 which doesn’t have photo editing available).

After looking at the falls we returned up Wilsons Creek Road to the start of the track to Garawarra Farm and ultimately Burning Palms Beach. It starts right next to the road bridge over the railway, and despite it also being the local schoolkids’ shortcut to the station, is initially quite steep and rough. It soon levels out to a ballasted road leading uphill to Halls Road eventually. Before that though we turned left onto a bush track to the corner fence of the Old Helensburgh Tip which is the start of the Hacking River Fire Trail (well that’s what Google Maps and “Wildwalks”site calls it but I defy anyone to get any sort of 4 wheel vehicle along it’s first 500 metres!). This time walking along the fence line it looks like all the blackberries we saw last month on this walk had been picked, as there were none this time.

After the end of the Tip fence the track leads to the REAL Hacking River Firetrail which continues level for while, passing through some gates (normally open except during bushfires) which also mark the spot where the South Coast Line passes underneath through the present Helensburgh Tunnel. It continues level for a while through open scrub then starts dropping down into the valley of the Hacking River through lush timber and numerous Cabbage Tree palms. We then turned left where the Burgh Track starts, marked only by a small NPWS pole. It doesn’t say “Burgh Track” – you just have to know it is, and on many trips some groups have walked right past it.

Down the narrow Burgh Track we went, coming to a sign pointing to Garawarra Farm and Burning Palms, and from here almost to the River the track is quite vague, carpeted with fallen leaves. Eventually (if you are going the right way) a set of old wooden steps appears which takes walkers to the fording spot on the Hacking River. This time the river was low and was easier to cross than on past walks here and the stepping stones were dry and not slippery. So we all crossed easily without getting our feet wet. Then it is a short distance to Lady Wakehurst Drive. Here I stopped to give directions to a family group who had parked there and wanted to know the condition of the track. I suggested driving about another kilometre or so down the road and finding the Lilyvale Track (with a sign that wrongly states “Coast Track”) which is more easily graded and a bit shorter than the Burgh track to reach a lookout point (Werrong or Otford Lookouts).

As for us, we commenced the hard 1 km slog up the Burgh Track to the top of the ridge, with a couple of water breaks along the way. Thankfully it levelled out for the final half km track to Garawarra Farm car park, which was almost full of cars (and with lots of disappointed people who must have been going to Figure 8 at high tide!). We got there 2 hours 15 minutes after leaving Helensburgh which was good going. The Portaloos there have been replaced with deep pit dunnies but with much more room so are also handy for changing into swim clothes for Burning Palms Beach. Then it was down the rest of the Burgh Track to reach Burning Palms Beach. There are a few view points along this track lower down to view conditions at Figure 8 Pool, and this day it looked safe to get there. Shortly we arrived at Burning Palms Beach at 3.40pm and asked the Lifesavers there why there were no flgs up. They said it was because they had finished their patrols for the day. The beach looked quite safe though and after a late lunch some of us went for a swim in the relatively calm and delightfully warm water. For lunch I had another sandwich with home made Davidson Plum jam and Roxana sampled some and declared it “nice”. (The jam comes from the fruit of this native tree I grow in my yard; the species is actually an endangered native rainforest tree).

After our swim we decided to same time by walking to Figure 8 Pool in swim clothes (but with walking shoes). Once past the sort stretch of “lawn” at the south end of the beach, there is no proper walking track. Instead to get to Figure 8 Pool you walk first along a rock platform to the first headland, then on a rather exposed and often slippery track around that first headland, and only during a very low tide and a slight sea swell. Some of the rocks are always damp from sea spray and much care needs to be taken to avoid slipping (hint: if rocks look dark and damp they are usually slimy and slippery). If the sea swell is too high a more difficult rock scramble is required closer to the cliff face at the first headland (Moseley did that on the way back later). From the first headland there is a boulder field to negotiate which requires hopping from one to another for about 250 metres until reaching another rock platform and a bit further on is Figure 8 Pool.

By this time (4pm) most visitors had left so the pool site wasn’t crowded. Most of us were happy to have a look and take photos, and Roxana went in for a dip. We stayed for about 30 minutes then, mindful that the tide was about to turn, started making our way back to the south end of Burning Palms Beach. At the “lawn” we had a 10 minute break so that Roxana could change out of her swim clothes, and I ate an iced bun which I still had, left over from lunch. That proved to be a mistake as I found out an hour later.

So we set off along the Coast Track tp Otford Lookout and Otford. We passed through the Lomandra section and saw the one and only dragon we came across on this walk. Then through Palm Jungle (the track thankfully dry instead of its usual quagmire in places) and then it starts to rise up through several series of steps that never seem to end – or feels like it. It has been made more difficult by the unevenness of the track caused by severe erosion and exposure of tree roots by the hordes of tourists going to Figure 8 Pool. We needed a couple of water breaks, and then we came to the final section of steps cut in the stone which is probably the remnants of the first track here from the former Lilyvale Railway station (closed in 1983). It was about here that I started to get a stomach ache from the bun I had eaten earlier, and also felt light headed (Isabella reported also being light headed but no stomch ache). No, the bun was not caising food poisoning, it was quite OK that way. Instead I had made the mistake of eating someting not easily digested before starting on a hard climb. Blood was being directed to my stomach instead to my legs and head where it was really needed right now! I had to lie down for five mintes to get the blood back to my head. So a lesson: don’t eat heavy foods like buns just before starting on a hard slog.

After the break we continued on and thankfully we had reached the top of the ridge by now. From Werrong lookout NPWS has laid down a new boardwalk almost all the way to the junction of the Coast Track with the Clifftop Track (called “Squeezeway” by Wildwalks site). The Clifftop track here goes for about a kilometre before reaching another track which is being repaired by NPWS with a boardwalk to stop track erosion. After another 1 km it reaches Otford Lookout where he had a deserved rest for some minutes. We had reached this spot at 6.30pm so we can covered the distance from Burning Plams in 90 minutes which was good going even with the enforced breaks along the way. (Wildwalks website quotes 2 hours for the same distance, and going in the opposite direction downhill!).

As we still had 45 minutes until train time at Otford, I decided to get to Otford Station via the more easily graded but longer way via Domville Road and Station Road past the public school and on to a track beside the railway fence to Otford Station. On this very last section I started to experience a cramp in my left leg (I suppose it could have happened at a worse place further back) and I limped the last 50 metres to the station. Fortunately by the time the train came 10 minutes later the cramp had gone. Everyone arrive back in Sydney by 8.15pm. I was also fortunate in that trackwork arrangements meant that I was able to change to an earlier train at Redfern getting me home half an hour earlier than expected.

Everyone appeared to have a good time, and no one got any leeches. There are some photos below but a lot more in the link at the start of the report.

This report by ABC News leaves no doubt as to how dangerous Figure 8 Pool can be sometimes: https://www.abc.net.au/news/2019-02-28/call-to-close-access-to-social-media-favourite-figure-8-pools/10853854 It is essential to check the tide and sea swell infomation at https://www.nationalparks.nsw.gov.au/things-to-do/lookouts/figure-eight-pools before going there.