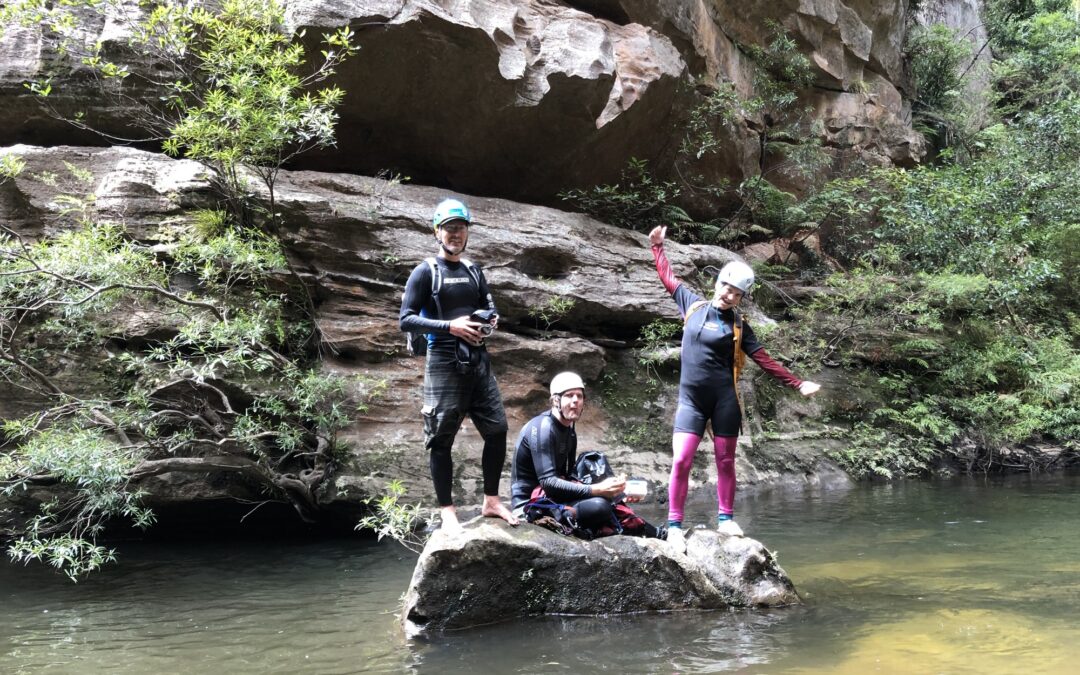 This was a fantastic four days of intensive canyoning. Six members of NRBC drove down to join us and twelve SUBW members showed up, making 18 participants, but no more than 16 on any one day. The first SUBW people arrived at Cathedral of Ferns on Thursday night, where NRBC had captured the wet-weather shelter! It was good to see Shane again, who had guided us through the Border Ranges canyons in December, and to meet some more Northern Rivers people.

Friday morning we decided to attempt Claustral Canyon, but with some reservations about water levels. Friday itself was sunny, but it had rained heavily all week. We had a rather too large party of 10, 6 NRBC and 4 SUBW. We descended the canyon as far as the Black Hole, where Kosta judged that the water flow would be too dangerous to proceed with the cave abseils, so we reversed back up the canyon. The two jumps/climbdowns proved quite hard to reverse with a lot of water coming down, and on the second we set up a belay to protect people while they climbed. The whole thing took about 4 hours.

Back at Cathedral of Ferns eight of us decided to do Serendipity as a consolation prize. It was great to see the appreciation by our NRBC friends of a canyon that is often regarded locally as pretty unimpressive. Having added another 4.5 hours canyoning to the initial 4 it started to feel like a long day. A good meal and chat around the campfire followed as more SUBW people started to arrive ready for the weekend.

Saturday saw our largest single turnout with 16 people. The weather had turned wet overnight, but we did not expect heavy rain. We divided into three groups, with Bron leading an abseil-free trip connecting up Belfry, Bell, Du Faur and Joes canyons. Kosta led a fast party through Lower Bowens North, assumed to be fast because everyone was young and fit, and Paul followed 30m later with a slow party, assumed to be slow because it had the older members of both clubs! The ‘slows’ were very pleased to catch the ‘fasts’ when they were changing into their wetsuits, and again at the first abseil, but that was the last contact. The ‘fasts’ took 5 hours, the ‘slows’ took 6.5. However, the ‘fasts’ were so fast they left some of their clothes behind at the changing spot, which led to a good laugh when some ‘slows’ turned up at dinner wearing them.

Bowens North has an excellent, deep, dark, water-sculpted constriction and our NRBC friends were awestruck. Most of their canyons are rainforest gullies with big, open waterfall abseils.

We were well into dinner and it was getting dark when Bron’s tired group walked into camp after a nine-hour trip. They reported a great trip through some beautiful canyon sections, but with some pretty demanding climbs and climb downs: “Abseil-free meant we just did the abseils with no gear” someone commented!

On Sunday there was some change over in the SUBW people present, and one member of each club electing to take a rest day due to minor injuries. Kosta led a group of eight to descend to the Wollangambe, climb up the other side and descend deep, dark, Whungee-Wheengee Canyon. Paul and Marty led a smaller group to float through Wollangambe Tourist Section 2, the one that is still open following last month’s tragic accident in Wollangambe 1.

In Wollangambe 2 we encountered a large meet-up group, one of whom had no wetsuit and was in danger of hypothermia, while others had minimal flotation devices (like a swimmers kickboard) and looked pretty exhausted as we passed them (offering to help). Just because people Instagram themselves floating the canyon on swans and flamingos does not mean it is easy. We had one person catch a foot in the rocks in a rapid and it took two strong guys to pull them clear. Just scratches this time, fortunately.

Passing the exit from Whungee-Wheengee we met Kosta’s group coming down, having made amazing time. What a bit of luck! The rest of us scrambled and swum up Whungee-Wheengee as far as the bottom of the last abseil. The lower constriction is extraordinary – a long section just a little over a metre wide and perhaps forty metres high with just a thin crack of sky at the top. We swum back to the Wollangambe exit climb together – through a slightly worrying but beautiful thunder shower, before climbing out in bright sunshine to have a late lunch on the cliffs above the canyon.

Most of the SUBW crowd headed home Sunday night, and most of the NRBC crowd started their drive home Monday morning, but three of us stayed on to do a quick trip through Rocky Creek in amazingly warm, sunny weather. We met the little hypothermic sugar glider who featured on the Oz Canyons page this week, together with its rescuer. Apparently it is doing well.