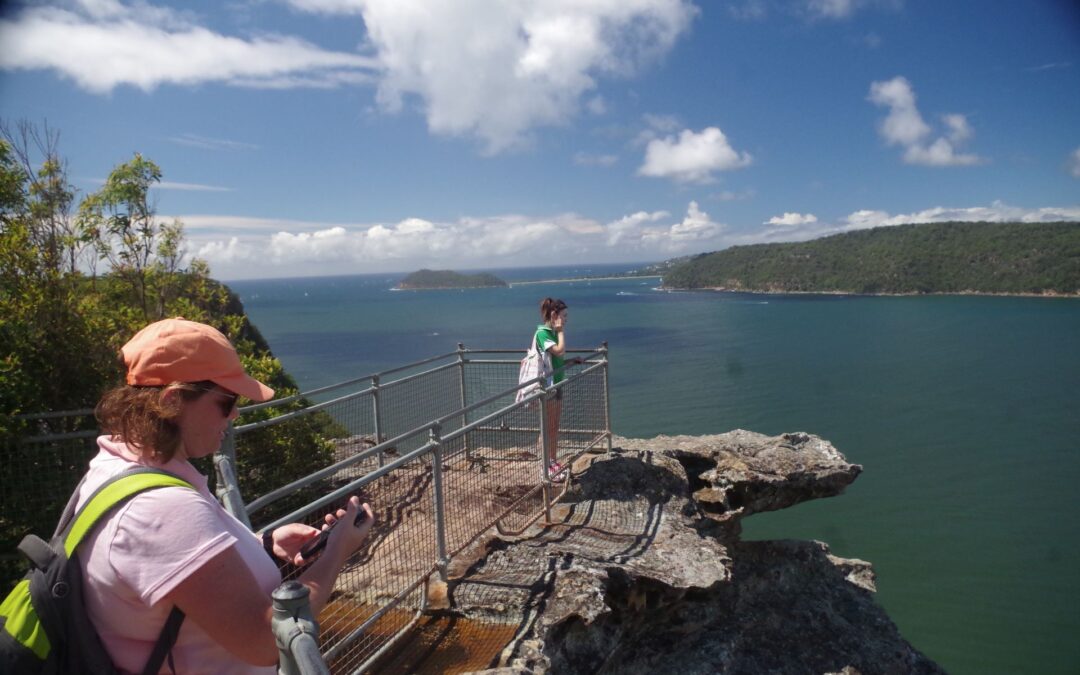 With a forecasts of very possible rain showers, but with a temperature of 27 degrees C forecast, I thought that this walk could still be a goer with nice weather. It turned out to be mostly correct; I decided that a day with such a temperature wasn’t going to be totally washd out.

Of the original 8 that put their name down, three pulled out by friday for varied reasons, but one person emailed me at 11pm on Saturday that she was pulling out because of the likelihood of rain.

Just before I left home, I checked the Newcastle rain radar (the Sydney one was offline) and it showed a very narrow line of rain bands – headed straight for Woy Woy! I got a rain shower the instant I left home and annoyingly I was getting both rained on and also walking in brilliant sunshine, which made the raincoat rather uncomfortable. The three who came up in the train to meet me at Woy Woy got a rain shower passing through Wondabyne, but that was it. No more rain for the day.

A problem started right away; the train had arrived about 400 metres short of Woy Woy Station – and stopped there for 20 minutes! I could see it (I have arrived on a different train earlier) and could see track workers loking anxiously at the points on the adjacent track. Never did find out what the problem was. Meanwhile, the Patonga bus and a Umina bus had arrived and left befre the train finally pulled into Woy Woy 20 minutes late. That meant changing from my plan of starting the walk at Patonga to starting at Umina Beach instead. Fortunately another Umina bus was due out in 5 minutes and we caught it.

At first, however, we thought that Yonghan had become a “no show”. Bridget and Isabella had met me outside the ticket (Opal) gates as per my emails, but Yonghan had not appeared. After telling the girls about the change of plan, we were about to got downstairs to the bus stop when Yonghan rang, asking where we were, as he could see no one on the platform. I told him to come up the ramp through the ticket gates, which I had instructed everyone to do in two emails. Had that train been only 16 minutes late and we had to make a mad dash to the Patonga bus (which was still there then), we would just have left Yonghan behind, assuming he was a “no show”. Shows how important it is to read emails fully.

The bus to Umina Beach took only 15 minutes and we got off not far from the beach’s south end and the rock platform. Fortunately it was at low tide and despite quite a sea swell it was thus safe to walk along the rock platform and then up a steep rough track to the pathway to Pearl Beach (originally the old road before landslides and erosion blocked it). On reaching Pearl Beach’s north end we walked the length of the beach until the chnge sheds near the shops – and a welcome toilet break. From there it was a road bash to Crommelin Arboretum. On the way we saw a pair of Spur-wing Plovers, who are known to attack human intruders in the breeding season (just passed).

Crommelin Arboretum is a collection of plants and trees native to the area, which is “humid subtropical” like all the coast north of the Hawkesbury, and it certainly felt like it today, with the temperature climbing to 27 degrees C and very humid. We had a short break here before heading off again on a dirt road to the entrance of the University’s Field Research Station, near where a vague track starts up the hill; so vague that Yonghan asked if we were on a track. As it winds its way up the hill it becomes more obvious (except for a couple of places) and eventually joins up with the Pearl Beach-Patonga Fire Trail. The old track is possibly the remains of an old bridle track tp Patonga. The Fire Trail continues uphill gradually and took us to the side track to Warrah Lookout. Here there are fine views of the Hawkesbury River and Palm Beach. From there we went back to the Fire Trail which after a short time reaches the side track to Patonga, which here is part of the “Great North Walk”. This track descents gently – at first. Then on its last section drops rather steeply until reaching the foreshore at Patonga. From there it was a matter of walking along the foreshore to reach the pavilion of the local Cricket Ground where we had lunch. On the foreshore we saw plenty of seagulls and another pair of Spur-wing Plovers.

At lunch I had a jam sandwich made from Davidson Plums, home-made from a tree in my yard. Bridget had a taste and declared it to be nice. (Davidson Plum is an endangered native rainforest tree from Northern NSW and QLD but frequently cultivated like I do). A juvenile Magpie came into the pavilion with a parent begging for scraps.

After lunch we returned almost the same way to Pearl Beach. The climb up the ridge from Patonga is quite steep but thankfully not as long as ascents on some Blue Mountains tracks like Furber Steps. Instead of using the old bridle track to get to the Arboretum we went stright down the fire trail, passing on the way a large group of scouts checking out one of the overhangs along this track. In the Arboretum we walked through it to the back streets of Pearl Beach for some variation, then on to the beach itself. Bridget, Isabella and myself went in for a swim while Yonghan relaxed on a bench. The water was quite warm once in and very nice.

After our swim we dried off and I went for a walk along the rock platform at the south end. Then we got the bus (only one bus each afternoon at Pearl Beach) and went back to Woy Woy station. Isabella found that her mask had dropped out of her bag somewhere and had none to wear on the train and none of us had spares. In a sign of the times, a vending machine on Woy Woy station sells masks! She got one and avoided a possible fine. Bridget, Isabella and Yonghan didn’t have to wait too long for the train, which wasn’t delayed this time!

It turned out to be a good day for those who took a chance with the weather and were rewarded.

A couple of points: As mentioned, you must always read fully all emails that walks leaders send you, especially the meeting instructions. Yonghan also asked me if I had phoned those who hadn’t arrived yet (as he was told earlier in the week that 8 were coming). I don’t do that as it is up to latecomers to contact me if there is a problem getting to the meeting point on time (and most people in this situation do call me).

I was asked about future camping trips. I certainly want to do some but there are logistics issues at present; Social distancing means the number of people you can put in a vehicle for a long trip is less than usual. Some campsites are accessible by rail but also mean a reasonably long walk from the nearest station. Even so, I will try to see what’s possible.

Some photos below but there are plenty more in the link at top.