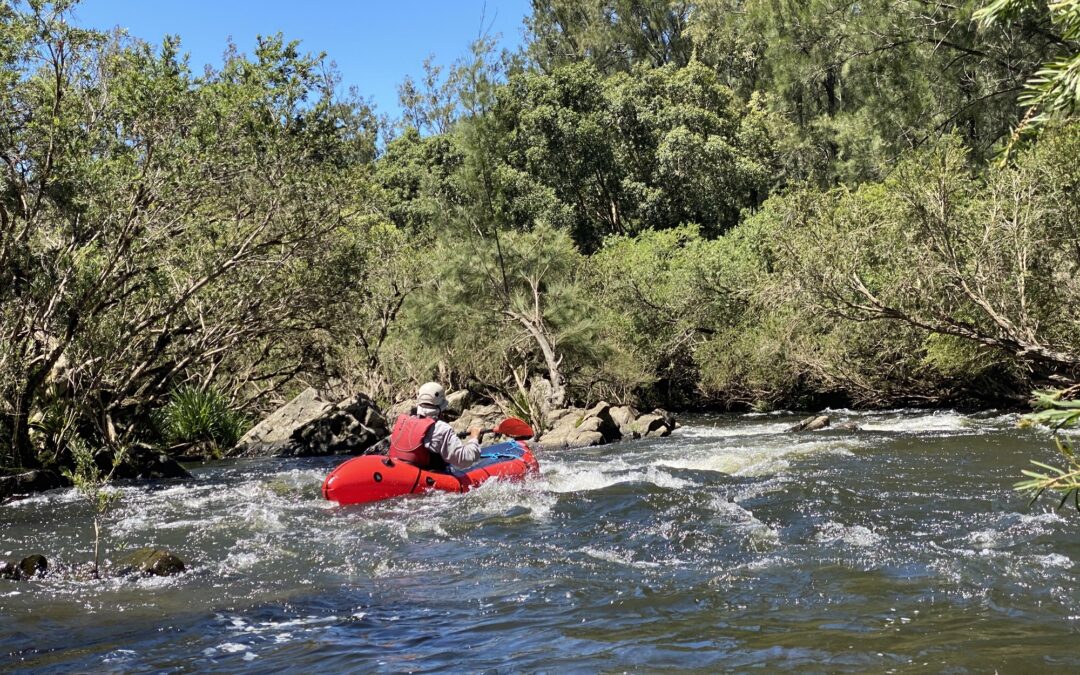 The clouds were lighting up and there was a rainbow in the sky as we rolled into Gloucester on the Friday night. A good omen for the Barrington River Rapid Adventure ahead. Everyone managed to make it to The Roundabout Inn, some just before the kitchen closed (8pm for future reference). Present were Jenny and Martyn, Adrian, Sabs and Sam, Paul and Therese. We had decided to book cabins in the rustic but picturesque Gloucester caravan park (on the edge of the Gloucester river), because of the convenience of The Roundabout Inn for dinner, and the quant main street coffee shop for the morning kickstart (just a few caffeine addicts amongst us).

After a very civilised 8am start, (coffee and cake for some at Roadies café-great decor), we headed to the Barrington Adventure Centre for some route clarification and to borrow a rapid map. We had planned to pack raft from Stony Crossing to the Barrington Bridge which was a good introduction to pack rafting for the novices among us. Naomi was very helpful and advised us that due to the heavy recent rain and local flooding, there was a very large tree/ strainer blocking our progress down the river and that we should get out at the Lane way. We were disappointed as this cut our trip from 10km to around 8km but we heeded local knowledge and erred on the side of safety.

At the Stony Crossing reserve, we set up the pack rafts and I ran a quick lesson on paddling techniques while Mart and Paul organised the car shuffle. Mart couldn’t resist driving the Prado across the flooded causeway, which he managed three more times over the day. Adrian quizzed some other canoeists and ascertained that the causeway could be paddled at the .61m water height and Paul, Mart, Adrian and Sabs decided to run it. The rest of us walked to the convenient launching ramp that was close by down river.

After the first rapid we all needed to add air into our pack rafts that had cooled. Then we headed off down the river. Paul was in the lead scouting the rapid and Mart was in the rear picking up the stragglers.

We stopped for a pleasant lunch on a grassy bank after one hours paddling, then continued on for another hour to the exit. The rapids were grade 1 ‘races’ and some grade 2 and very few rock obstacles, with lovely tree tunnels, interspersed with flat stretches and lots of cows watching us glide by. As it was only 2pm when we finished, four of us decided to run the river again. With our prior knowledge we completed the stretch in an hour and twenty minutes.

The remainder paddlers went for an explore and a second coffee, or relaxed with a book. We returned to camp for showers, had nibbles and drinks on our cabin deck, then walked to the Inn for Pizza which finished off a very successful day.

Day 2 started slightly later with the packing up of cabins and tents, we stopped for coffee and a chat with Naomi at the adventure centre. We planned to paddle from Bindera to the Cove, via The Steps Campground. Alas, we couldn’t paddle further to Stony Crossing because of another large fallen tree. Naomi advised us that we needed to chat to the Bindera property owner and offer a $2.00 donation per boat. The property house is the last one closest to the river parking spot, and we were told if no one made an appearance, to place a donation in the letter box. He was a pleasant man and after a brief chat we parked the cars on the river flat which was very convenient for unloading.

The rapids on this section of the river were a little more challenging but loads of fun. The first was a wild windy tree tunnel race. The only tricky rapid was ‘The Steps’ which was easy to navigate or portage, and most of us ran it a couple of times. There was one capsize, which also led to a ‘would be’ rescuer also capsizing. Running a rapid submerged in the water while trying to grab upturned pack-rafts and paddles (before they sunk) wasn’t as much fun. Thankfully a tree caught my pack-rafts on the edge of the river and I was able to re-launch from within the tree. I’m not sure how Adrian righted himself but he yelled a greeting (or maybe a “your all-right Jen”) as he paddled past searching for his drybag with the car keys inside. (mental note for next time, secure bags and drink bottles to the pack-raft).

We were disappointed not to spot a platypus on our journey, but there were definitely less farm smells on this section of the river. It took us about 4 hours to complete the journey and we had our lunch at 2pm on the concrete canoe access ramp at the Cove. Paul, Mart and Adrian (he found the bag with the keys) completed the car shuffle as the rest of us packed up the gear.

The group decided that an ice cream to celebrate the end of a great weekend was in order and headed into Gloucester on a mission. After fond Covid farewells, we steered towards our respective homes vowing to return to the Barrington River again one day soon. Much thanks to Paul for his custom-made GoPro mount and video’s, and Sam for her photography. Also, to my fellow pack-rafters whose company made the weekend so much fun. The steps campground does look like a lovely spot if you book early. $23 per night per person. If the tree strainers were removed, this would be a lovely overnight trip from Bindera to Stony Crossing (a free campsite with a drop toilet), where you could camp for the night (gear could be left in the morning) and then on to Barrington Bridge Reserve (which is also a free camp site, sometimes closed due to flooding). Watch this space……..