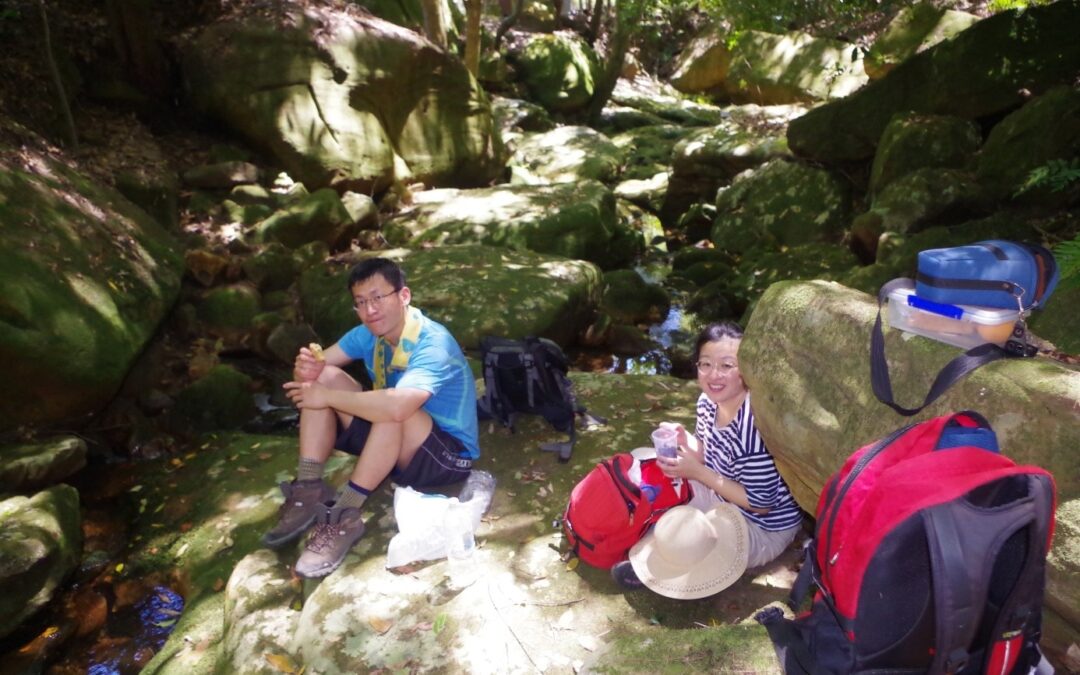 Although exam time was coming up, I decided to run this walk this day as between now and March next year, this walk is too hot for trips in summertime. So I decided that it was now or never (or a while anyway).

I knew that there would be not a lot of people wanting to come on walks right now, in exam time, and I originally had 6 sign up. Three however dropped out for various reasons leaving just three to do the walk. Andy Zeyu just missed the train at Central, and normally I would tell people in that situation that they will have missed the walk. Because of the small number though I gave him some leeway and instructed him to catch a Newcastle train 30 minutes later, get off at Woy Woy, and wait for the next train going back to Wondabyne in 8 minutes, which he did. That way he was 45 minutes late instead of 1 hour late. (While waiting at Wondabyne, Barbara and I got talking to another walker who’s friend had got caught out exactly the same way!).

Eventually Andy arrived at Wondabyne and we set off up the steep climb which starts right at at the station and goes up to the top of the ridge. From there a fire trail commences which eventually ends up at Girrakool but we would exit that after about 2.5km for the bush track which goes to Myron Brook and then Kariong Falls. The wildflowers were out but not in as many numbers as seen on past walks here. I wonder if the delayed start to summer has something to do with that. Also there has been no bushfires in this area for over 10 years now. We also saw the first of the many large Skinks we came across on this walk. The track drops down to Myron Brook fairly steeply after a while and is quite rough in places. Myron Brook was running well and nice and cool.

Then it was on the next short section of track to Kariong Falls. Here we saw quite a few children and a few adults taking advantage of the cool large pool and waterfall onthis day that was now starting to get very warm. I would not completely trust the quality of the water here as upstream is a large Scout camp. It may have been better right now as there has been no camp groups there over the past several months to pollute the stream, because of the Coronavirus.

After a break at Kariong Faslls, we continued as the track rose steeply up to meet the fire trail from Staples Lookout. More skinks seen (little ones as well as big ones), and not far along the trail we came across a Goanna which had gone up a tree to escape us. Goannas should always be regarded as being snakes with legs, as it is now thought that the saliva is venomous, and they will bite if cornered.

By now the weather was really starting to heat up, and it was obvious that it will go beyond the forecasted 25 degrees C (in fact it got about 29 degrees). There is not much shade along the fire trails (which is why I prefer to start walks here early). Once the side track through the heath is reached however, it is better. We came across a very large rock shelf, one of many throughout this area, on which there are Indigenous people’s tool sharpening grooves. Further along we crossed a small stream in which there was a large tadpole (see photo). The water here is very clear and probably safe to drink if you were runnning out of water (I say “probably safe” as you can never be completely sure). Shortly after that we came to the Mullet Creek Fire Trail which is also a railway access road. We followed that until the track branching off to go to Mt Wondabyne.

We had another short water break and because of the hot weather I was concerned about the likelihood of finding shade on top of Mt Wondabyne if we went there for lunch (and also assuming that what scarce shade there is was not already occupied by other walkers). So I decided to keep going along the railway road to reach the Sydney end of Woy Woy Tunnel. beside which is a deep cool gully with a steam (the same one which higher up had the tadpole). After a short while the trail came into more heavily forest and provided better shade. Near its end there is a track branching off into the bush which I think eventually goes to the top of Mullet Creek, and maybe a job for a future exploratory walk. The main trail itself then drops very steeply until reaching the Sydney end of the 2km long Woy Woy Tunnel. From there a short path leads to a small hut beside which the adjacent cool gully can be reached by a short scramble. We moved a bit up the gully until finding suitble rocks, and sat down for lunch in the shade beside a babbling brook.

After lunch we had a bit of a look round for few minutes, then returned back the way we had come to reach again the track to Mount Wondabyne. Along the way we encountered a large flock of Yellow Tailed Black Cockatoos flying around and roosting in the trees.

Then it was off along the stony track which eventually comes to Mt Wondabyne, and further on eventually to Patonga. It was quite hot along this section which has almost no shade and the rocks were also heating up from the sun. We made and entry in the NPWS log book and then after an exhausting climb in the heat reached the side track to Mt Wondabyne. We went only a fairly short way along the track to the summit, just enough to get the view which includes the distant Blue Mountains. The view wasn’t so good today, being hazy. By this time we had used up all of our 2 litres of water on this hot day, and so the plan now was to go down to Woy Woy which was 1 hour walking away instead of returning to Wondabyne Station.

Even so this meant walking on more open fire trails with little or no shade for quite a while, which started getting us tired, fortunately all downhill, until a forested short section next to Woy Woy Tip. Even so from the Tip gates there is still about 1.5km of walking beside a bitumen road until reaching Shoahaven Drive, which we walked along for another 250 metres until reaching the bus stop on Nambucca Drive. Here we waited under the welcome shade of a footpath tree, but the bus to Woy Woy Station came in only a few minutes. We arrived at Woy Woy Station with 10minutes to spare for the next trains, time which was used to get welcome cool drinks from the drink machine.

We had a good time despite the unexpected level of heat, and hopefully more trips later in the year, although more likely with access to beaches!