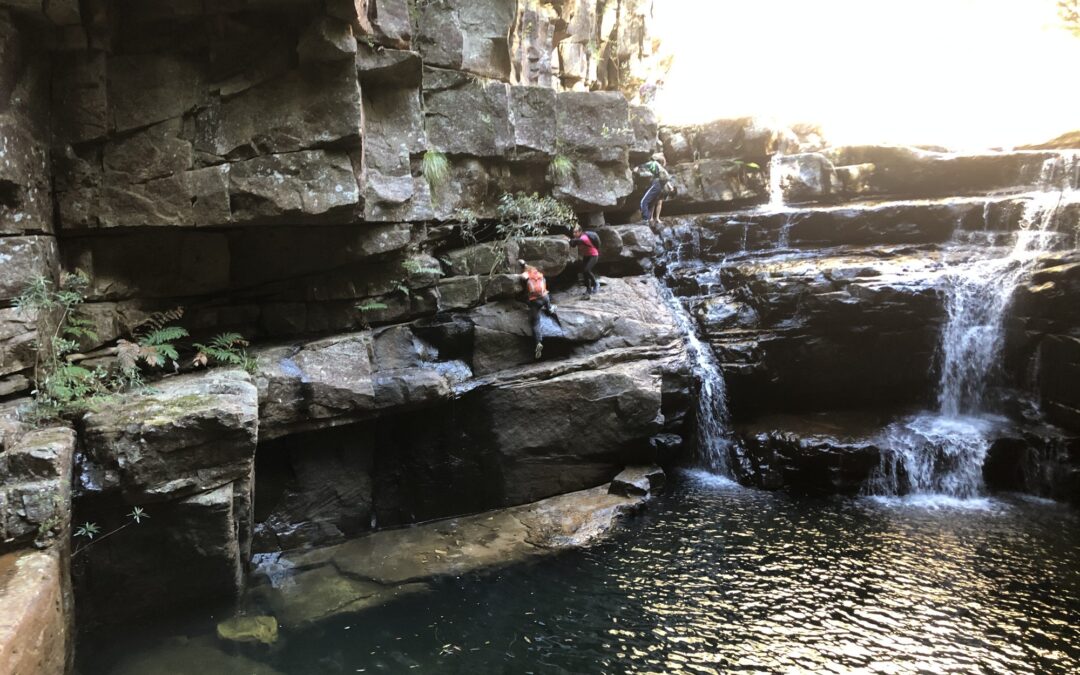 The start of the firetrail is misplaced on Google Maps, and we waved to one another from the cars as we drove around looking for the right driveway. But soon we were off down the trail, and surprised to find no locked gates so that we could drive right to the end. We were a little concerned because only one car was 4WD, but we all made it successfully, although on the way out one car bogged in a deep slough and we had to tow it out with the 4WD.

We now found ourselves on the point of a ridge, with creeks 200m below us on all sides. We’d seen various bits of surveyors tape hanging from branches along the trail, but no obvious track, so we walked right out to the point, where we found two pieces of white tape around trees, and so headed straight down the ridge at about 9.30. It soon became clear this was not the usual way down, but the ridge was pretty straightforward so we decided to carry on. It was at this point that someone pointed out that we had a barefoot bushwalker amongst us – in the great tradition of Dot Walker, one of the founders of NSW bushwalking. Towards the bottom of the ridge the dry eucalypt forest gave way to wet forest full of lawyer vine, making the descent much less fun, especially one bit where it was extra steep, the lawyer vine was extra thick, and we disturbed a bull ant nest. Character building.

Arriving at Lagoon Creek our first task was to hunt about for the normal route down, so we first rockhopped up the creek for about 1Km, finding nothing noteworthy, before heading back down towards the junction with Wheeny Creek. Pretty soon we found the bottom of the usual route, marked with surveyors tape and a cairn, so we knew we could get back up to the cars quickly when the time came. By 12.45 we were at the first waterfall, cascading about 10m into a magnificent plunge pool below towering cliffs. Here we stopped for lunch, swimming and waterjumps.

I had assumed the waterfall was at the junction of Lagoon and Wheeny Creek but a look at the map indicated we were still on Lagoon Creek, so we pressed on, finding the creek wider here and a footpad along the bank. Ten minutes easy walking brought us to another lovely waterfall, dropping into a massive circular pool. On the flat rocks above the pool was an absolutely massive pothole, the kind that forms a ‘keeper pothole’ in a canyon.

Michael had strained a calf muscle, so we left him with his big camera to immortalise the waterfall while the rest of us pushed on up Wheeny Creek to the first big bend, walking over smooth rock shelves past several beautiful pools, before turn-around time at 2.45.

We started back from the second waterfall a little after 3.00 and, knowing the route now, we were back at the cars at 4.30 after a stiff but straightforward walk up 200m vertical in 450m horizontal. Plenty of light to deal with the bogged car, and still light when we stopped for fish and chips at the Archibald Tavern on the way home. The pub was even more charmless than usual, with the carpet taken up and COVID distancing marks spray-painted all over on the chipped bare concrete, but the chips were hot, the flathead fresh, and the view magnificent.