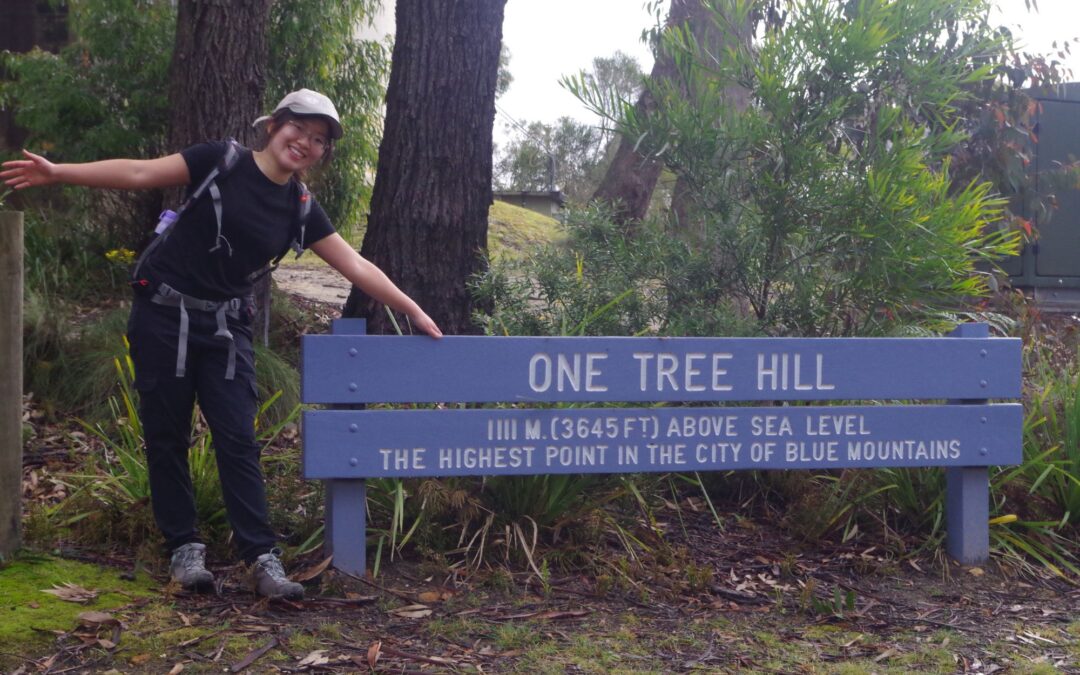 Although I had limited the walk number to 10, in accordance with COVID19 rules, and the walk filled up, Celina Li had to drop out, opening a space for Reece. Then on Friday and Saturday, three more had to drop out, leaving us with seven. One other person who signed up, Vasu, was nowhere to be seen on Saturday, so must be regarded as a “no show”.

The weather forecast didn’t look promising for that Saturday, but given the current fluid environment around COVID19 rules, I thought it better to stick to that day instead of the (then) more promising Sunday. Also, Blue Mountains trains tend to be less crowded on saturdays, which turned out to be the case on this trip. What’s more, the weather in the Blue Mountains turned out to be better on Saturday than the following Sunday; on that day the area got heavy rain in the day, whereas on Saturday it was only quite light rain. So sticking to Saturday turned out to be a wise choice.

Trackwork on the Inner West Line caused my train to be late too, with Kip and Jill worried that I might not make it to Central for the Lithgow train (I made it with 8 minutes to spare). Rickie also got on at Central and Yuanming at Strathfield, and after the long train trip we all met up with Reece at Mount Victoria Station (Reece had driven up).

We set off in very light passing rain, and headed for Pulpit Rock. There, the view was totally obscured by fog, so we went straight down the dirt road to the start of the Little Zig Zag Track (see photo of map). This track goes down into Kanimbla Valley via a series of zig-zags (switchbacks). At the end of the third zag there is a side track to Bushranger’s Cave, which we went along for a look. The fog had also cleared by now too, giving a clear view over the Valley below. The light rain had also stopped. The track to the “cave” is steep, slippery and crumbly so care needed to be taken. It comes to the base of cliffs studded with rock climbing bolts, and access to the cave itself appeared to be up a steep slope; not impossible but quite difficult. So we decided to give a visit to the Cave a miss, and made our way back to Little Zig Zag track. It wasn’t too long before we reached the start of the Rienit’s Pass track (going straight ahead, as was done on a walk several years ago, takes you to a dirt road in the valley). Rienit’s Pass turned out to be fairly steep in places and also quite crumbly and slippery from the recent rain. Easy to slip in places, and one of the girls nearly went for a long slide, catching herself in time!After dropping down the track starts to climb again – still with several slippery sections. It comes to the top of the talus slopes and the base of the cliff lines where there is a side track to a waterfall. Reece led the group to look at the waterfall while I went further along Rienit’s Pass to look for a lunch spot (as the rain radar showed another rain band coming). Reece reported that the waterfall was disappointing, with not much water.

I found a large overhang which I thought was Ross’s Cave (but wasn’t) but big enough for shelter while the expected rain band came through. Here we stopped for lunch. After lunch we set off and eventually came to a point where Rienit’s Pass crossed and at one point followed the Mt Piddington-Pulpit Rock track (done on a previous walk last year). Reece discussed heading straight up Rienit’s Pass which would end up at Carlisle Road. I opted for the longer but easier graded track back to Mt Piddington via “Witches Glen”, which also avoided a road bash. At Witches Glen we found a campsite complete with a fireplace and sleeping covers, but unoccupied. From there the track continued until reaching the road right next to the short track up to the top of Mt Piddington.

At Mt Piddington we stopped to admire the view, which took in the actual Mt Victoria peak, as well as the plateau around Hampton on the Jenolan Canes Road, and south to the Kanangra-Boyd area. Noted dark clouds forming to the west. A helpful couple took a group photo which included myself on a walk group photo (for a change).

The it was back the 1.7km road bash to Mt Victoria Station. On the way there was a photo stop at “One Tree Hill”, at 1111 metres the highest point in Blue Mountains Council area. We also stopped to look in at the Victoria & Albert café, but the owner said that the café section would stay closed for the time being (the dining section was still open). There was a café opposite which was about to close, which did takeaways for Kip and myself. The next train was standing at the station so we boarded and had some fun putting on masks; at one point I tried on a scarf (a bit too big!). I also discovered here that my mobile phone portable charger was no longer working, so Yuanming lent me hers to charge my phone on the trip home.

We said goodbye to Reece at Mt Victoria shops and eventually got back to Sydney shortly after dark. Everyone seemed to enjoy the day out and it wasn’t too cold and mostly rain-free.

I did mention something about Facebook on the original walk description. I still haven’t got a response to my email to them complaining about my account being “disabled”, although Mark Zuckerberg would almost certainly have seen my criticism of Facebook in the “New York Times”. Maybe I should join up as ‘Vladimir Putin” and see what happens! I must admit that I am inclined to give Facebook the flick anyway.