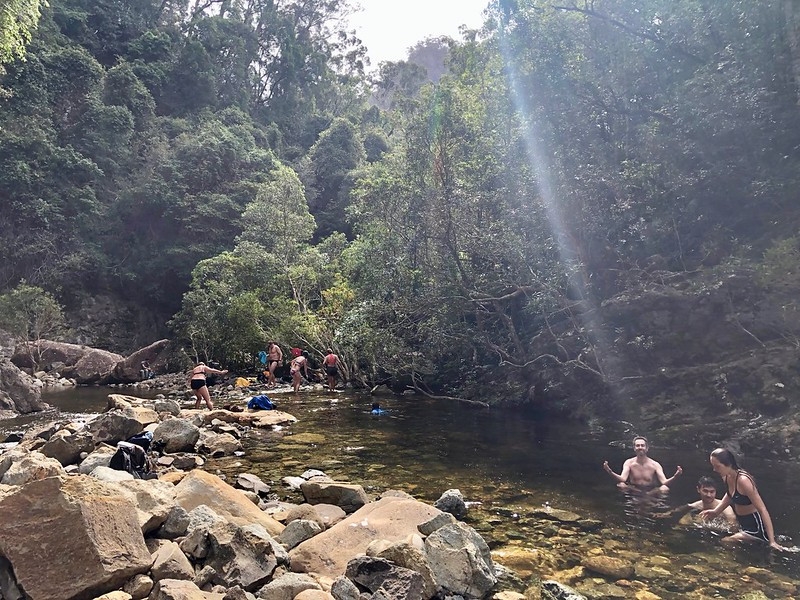 Matthew was the first to arrive at Kangaroo Valley on Friday and checked us in to the campsite. Another 14 people showed up between 6.00 and 11.00 and so the party grew larger, first at the pub and then sitting around Jen’s immaculately restored VW camper for tea, timtams and whisky.

We had a leisurely start the next morning, and it was 9.30 at the Carrington Falls carpark when twelve of us headed down the Missingham Lookout Track. Loren, Kosta and Anita stayed in the valley and had a more relaxed day due to illness and injury. After a couple of Km we reached the usual sign warning of trackless wilderness and endless peril beyond, and then started down the non-maintained Missingham Steps track. We scrambled down a steep, boulder-filled gully passing sets of rock-cut steps from when this was a timber-getting track. Rockfalls and changes in the bed of the creek have left these steps largely irrelevant as a means of getting down the gully – one set of three steps were directly in a waterfall looking like some kind of garden fountain – but they were an interesting addition to the scenery.

At the bottom of the steps Andrew did a great job of picking up scraps of surveyors tape and the occasional old metal marker to keep us on the track through the forest, and we reached the Kangaroo River, 250m below our starting point, at 11.15. The river here is in a tight gorge, with sheer cliffs, a beautiful, deep swimming hole and a little double waterfall just upstream. We had morning tea on a giant boulder before starting up the gorge towards Carrington Falls.

The Kangaroo River climbs nearly 200m before reaching the plunge-pool of Carrington Falls, so it’s a steep climb through a jumble of car-sized boulders intersected by river channels and small waterfalls. Since we were coming back the same way, people simply told the trip leader when they had enough, and sat down to chat, swim, and await our return. We started up the river at 11.45, allowing four hours for the trip of 2.5Km each way to the waterfall. However, although it was endless fun working out how to climb over and around the boulders, it was very slow, and when we stopped to assess progress at 12.45 we had covered only 800 horizontal metres. We were a lot higher, however, and the cliffs above us at morning tea were now on a level with where we stood! Since we were enjoying the bouldering problems the remaining eight of us went on for another forty minutes before choosing a particularly fine pool to swim and cool off. We then turned around, about 1Km short of our destination, and headed back down the gorge. Going down was even more fun, with a lot of sliding and jumping. Sam M had lost a boot sole, and while she waited for the shoe-goo to dry and fix it back on she emulated the barefoot bushwalkers of the 1920s, joined by Marty in solidarity!

By 3.45 we had picked up all the stragglers and had a final swim before heading up the other side of the gorge to complete our circuit. The little waterfall made a perfect spa and we took turns to stand under it for a slightly more pleasurable than painful massage of the back and shoulders.

Our plan was to take ‘Stevos track’ up the other side, but there was absolutely no sign of it near the river. Mathew and Andrew finally picked up a hint of a track on a very sharp ridge heading in the right direction and we scrambled up to find the track becoming clearer. This track is obviously not much used, although about half-way up we saw a few old metal track markers nailed to trees. We lost the track in a flat, swampy section and when we finally hit the cliffs we had to scramble along the cliffbase about 300m to the right before spotting the remains of an old dirt-road that took us straight up. This section of Stevos track, presumably build for timber getting, is an impressive bit of work – zig-zagging sharply up the hillside with stone retaining walls to hold the roadway in place. It’s now so choked with fallen timber that it’s easier to go straight up, crossing the zig-zagging road several times. At the top we passed another sign warning of trackless wilderness and endless peril – now behind us – and an easy 2Km of firetrail had us back to the cars where an esky of cold beer was waiting, including a six pack of zero percent for the drivers. We took nine hours from car to car.

The Friendly Inn had a music festival that night, with both kinds of music – Country and Western – to entertain us as we ate. After which it was an early night.

Next morning we drove to the beautiful Flatrock Waterhole, about as far as you can get up the Kangaroo River by car and about 10Km downstream from where we had been walking. Here we explored a little, swam, yarned, played with a packraft, dried tents in the sun and ate lunch before driving back to Sydney.

A great weekend with good company – thanks everyone!