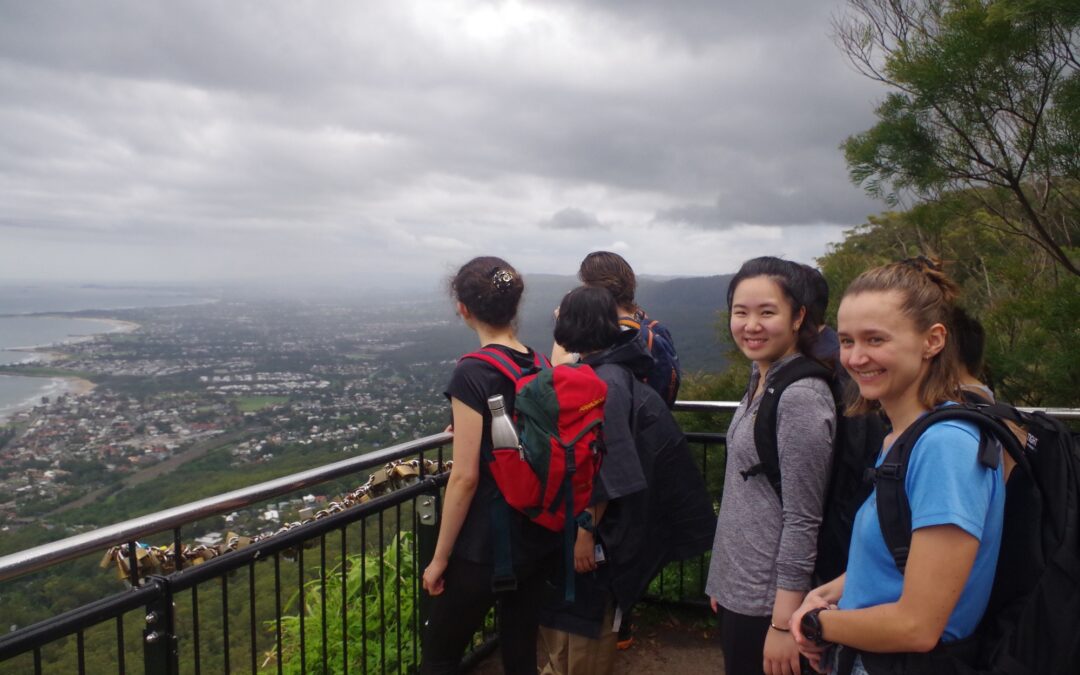 Most of met up at Central Station, with Lily getting on at Redfern and Matthias, Nathalie and Patrick getting on the train at Helensburgh.

At Coalcliff station I showed the group the top of the Illawarra Escarpment where we were headed (see photos) and then set off along the relatively new footpath and bicycle way that goes from Coalcliff to Stanwell Park (It was completed in November 2018 and eliminated a dangerous walk along the narrow verge of this busy road). The Wodi Wodi track starts as a culvert under the rail line about 600 metres north of Coalcliff station and immediately starts to climb through dense undergrowth then more open woodland at the edge of the escarpment.

At a tree an “unofficial” track branches off and starts to climb more steeply until reaching a set of wooden steps coming up from the “official” Wodi Wodi track below. As the track gradually ascended the escarpment we kept going until reaching a lookout above Stanwell Park with views of the town and the beach. Just before we got there I could hear the sound of a doof doof box further down and wondered if one of our group had turned on their mobile phone’s music. In fact the noise came from a pair of guys who thankfully went quickly ahead of us and did not stop. At the lookout we had a well deserved water break after the climb, and the girls took advantage of the view to get photos. Then it was off along the Forest Way Path, having left the Wodi Wodi track behind (It continues on to Stanwell Park Station eventually). From here it is mostly level with a couple of fairly moderate short climbs along the way. We come to a spot where the track was paved with coal (well, it is Coalcliff!), and further on a creek crossing which is normally easily crossed without putting shoes into the water but not this time! The recent rains had caused it to be a full stream. There were a few more streams further on but these could be crossed via bridges. The weather forecast had been for a chance of rain showers, but in the Illawarra a “chance” usually becomes a certainty. A light shower started but not heavy enough to need raincover, but then it increased so out came rain jackets and I put up a mini umbrella. The umbrella didn’t always fit through the undergrowth we passed through so I got a little bit wetter than the others. My concern though was finding a place with shelter for lunch, and they are scarce along this track. With good timing the rain stopped just as we reached a popular lookout spot above Scarborough at midday which was also a good time to settle down for lunch. It turned out that we were not the only ones who thought this was a good lunch spot. Patrick discovered a leech trying to get through his pants and after several attempts I just pulled it off and sent it into the bush. Another few leeches turned up however including two trying to get into my shoe. They were aso pulled off but only after tenaciously holding on to my finger!I therefore decided that maybe we should get going after a 25 minute lunch break and we set off.

Once again we encountered a brief rain shower but it didn’t last long. We came to a spot where mistakes get made by walkers along this track where the right direction doesn’t have one of those little arrows, and where the powerlines suddenly drop steeply over the edge of the escarpment. Some groups (including on my first walk along this track a few years back) turn right instead of left here and end up on a 4km boring road bash along the Prince’s Highway!This time though we were on the right path and continued on to our intermediate destination of Sublime Point. Along the way we spotted a tiny juvenile dragon only a few cm long (probably a young Jacky Lizard), and later on a small skink. That was all the animals we saw on this walk (there were several birds but they were heard, not seen). On reaching Sublime Point many headed off to the loos and some went over to the lookout there to admire the fine view south to Wollongong (as we all did later). As we had made good time along this track (as some lookouts were bypassed because of the rain) we had arrived at Sublime Point an hour earlier than expected. Lily wondered if it was possible to get an earlier train, so I checked the trains on Tripview and found that we had time to make it to Austinmer for a train to Thirroul, then change there for a fast train back to Sydney (which does not stop between Thirroul and Helensburgh).

We set off along the most adventurous and exciting section of the walk: the descent of the nine steep ladders from Sublime Point down to Austinmer. The track starts to drop steeply until reaching the top of the first ladder, and along the way encountered people out of breath who had just come UP the ladders!We made our way one by one down the nine steel ladders with the last one being the longest (the middle one has only three steps). But the descent was by no means finished! From there on the track descends along a series of steep spiral wooden steps which seem to go on and on and on forever. At last we came out at Foothills Road but from there it is still another 1.5km to Austinmer Station. We made it there with 10 minutes to spare for the train (I had allowed for 1 hour from Sublime Point to the station and we actually did it in 55 minutes. We did however not have to wait for other people ascending the single file ladders; if there were, that would have delayed us). We got the train from Austinmer to Thirroul (one stop further towards Wollongong) and then a 4 minute wait there for the train back to Sydney. Nathalie, Matthias as Patrick got off at Helensburgh and the rest of us continued on, getting back to Sydney about 5.20pm.

It was a great day out especially for our overseas students, and a bit of rain didn’t dampen out spirits at all. It was a good practice walk too for later walks in the Blue Mountains and elsewhere (when the trains eventually start running there again!). And there were no “no shows” either.