May the fourth be with you – Glowworm Tunnel 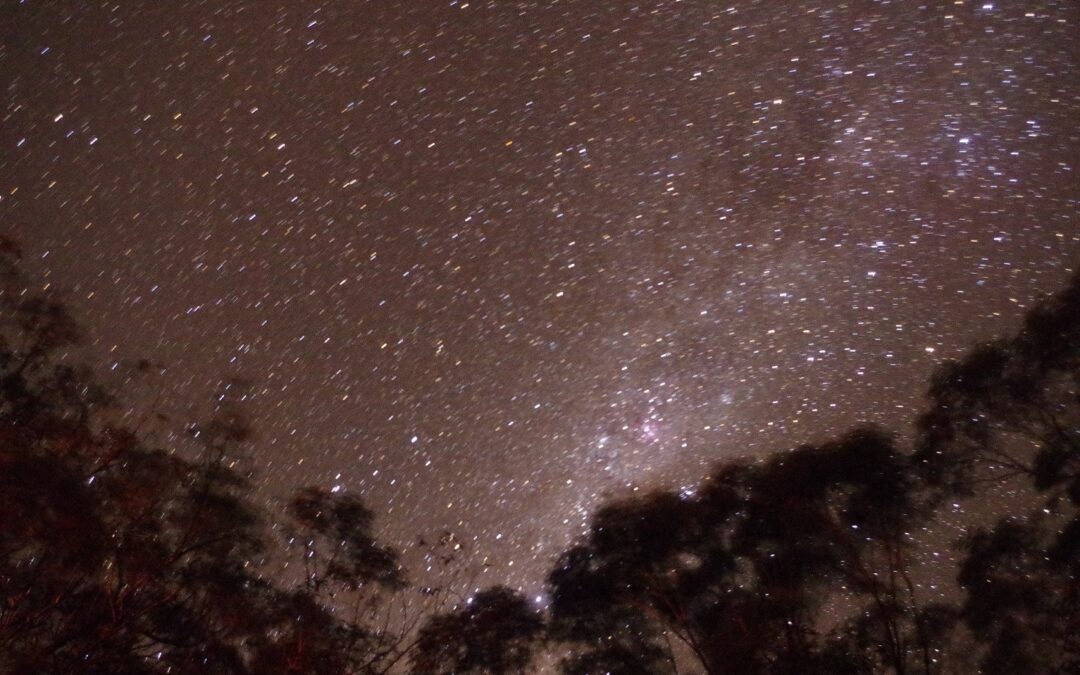 A planned mid morning departure from Strathfield got delayed due to my being delayed by a car breakdown right in the middle of the Brooklyn Bridge on the M1 (F3), causing an initial half hour delay. Of course the delay meant I ran into heavier traffic on the Pacific Highway and Ryde Road which meant I was 45 minutes late getting to Strathfield. Eventually I got there and fortunately was able to park very close by, and we divided the eight people into Zhong’s and my car. The excitement wasn’t yet over as I found myself having to turn on to the M4 WestCONnex at Strathfield and was resigned to having to pay for a toll (as I rarely need to use toll roads I don’t have a pass). But then, up came an escape lane under a sign saying “last exit before toll” just 2km further on. So out it was back to Parramatta Road and a stop to fill up with petrol before continuing. Then more heavy traffic along Parramatta Road until entering the toll-free section of the M4 at Parramatta. Zhong had a toll pass, but despite that advantage got to Blaxland Maccas just 15 minutes ahead of me. After a needed break including loo break, we continued on until Mt Victoria Station to ensure we were together for the last section to Clarence and then the Glowworm Tunnel Road across the Newnes Plateau. From Mt Victoria it was a straightforward drive to Clarence then along the Old Bells Line of Road to the Glowworm Tunnel Road. Noticed that along the Old Bells Line of Road there are numerous signs stating “keep out, 24 hour monitoring” which is deterring the dirt bikers who usually use the tracks in the bush there. Maybe coal or gas exploration going on?

Once on the Glowworm Tunnel Road, the pot holes start. I have seen it worse but they were still quite bad all the way to the northern boundary of the Newnes State Forest. Once inside Wollemi National Park the road gets better as no logging trucks use the road in the Park. On the way I had a brief stop to allow Zhong to catch up (he has a lower clearance car than mine) and noted with concern that the sky was partly cloudy, which was not a good sign for star watching that night. At Deane’s Siding we took the Old Coach Road as far as it is possible to drive, which terminates at Tiger Snake Canyon car park. On arrival there was just one other vehicle, a 4WD with a tourist from California who was just about to leave anyway. So from then on we had the place to ourselves until our walk at 8am next morning. Tents went up and a camp fire was got going. As wood collecting for firewood is much discouraged here, I had brought up seven large chookfood bags full of wood from home. Being very dry it burnt well and made an almost smokeless camp fire. In any case, rain in the area the previous day had made the local wood quite damp, so would be no good for a fire anyway. So everyone cooked their dinner on the fire, and later roasted Marshmallows, thoughtfully provided by Dalina. We stayed up quite late, unusual for a camping trip, and once the fire had died down wandered around a bit to get a good spot for star gazing and astrophotography. In fact for the photos we only needed to go into the car park turning area which gave a good clear view of the sky above. Not only that, but all the clouds of the afternoon had gone to give a totally clear night sky.

The Milky way was very bright, and also the Greater Magellanic Cloud (a distant galaxy) could also be seen. Jupiter was rising and also the constellation of Scorpio could be seen. The problem with star photography with an automatic camera is getting the settings right. My first attempts cam ut very bright even on a short 20 second exposure as the camera had set the ISO (formerly film ASA) setting at 51200! Manually reset to 800 ISO gave much better pics but again the camera had trouble focussing on objects billions of miles away! Some fiddling with the lens on “manual focus” got it close. I think that the best results can be obtained with putting old manual lenses on an auto camera (with Pentax cameras, 40 year old lenses can be put on to Pentax digital cameras; the camera needs to be configured to accept the old lens but it does work). Manual lenses can be set to “infinity” by hand. What we didn’t get to see however, were any meteors. Despite it being peak time for the Eta Acquarids, we were probably looking too early in the night.

So we settled in for the night. I found that despite my sleeping bag being rated to “minus 5 degrees C” my feet were still cold. Then I had the idea of putting the end of my sleeping bag with my feet inside a (now empty) chook wheat bag. It worked! problem solved.

Next morning we were up at daylight (before 7am) and got the fire going again with the single bag of wood reserved for the morning breakfast fire (the other six bags of wood had been used the previous night). By about 8am we were ready for the walk to the Glowworm Tunnel. Tents went down and cars packed, and the fire put out with 20 litres of water from the jerrycan I had brought along. Then we headed off down the Old Coach Road trail (which is also a fire trail) and after about 1km came to clear views of the rock pagodas on the other side of Penrose Creek (which is why the national park on that side

is called “Gardens of Stone”). After about 1.5km we reached the Pagoda Track which links the Old Coach Road with the Glowworm Tunnel track on the old railway formation. A short distance down the track takes us to the Glowworm Tunnel. It is an old railway tunnel on the former Newnes Oil Shale Railway. Headlamps came on and we proceeded into the gloom. As it is a horse-shoe shaped tunnel, the centre is always pitch black; no light ever reaches it. At that point headlamps went off and the camera tripod set up to get photos of the glowworms. They were not as good as I have seen them in the past; on one occasion they were so numerous the curve and roof of the tunnel was outlined in glowworms!There were just two other people in the tunnel, and they did not enter further than a third of the way in as they hadn’t brought torches!

Exiting the north (Newnes) end of the tunnel we came to a clear area at the head of Penrose Gully (not to be confused with Penrose Canyon). Until 1976 the rail formation from here went smooth and level almost all the remaining 10km to Newnes. In 1976 a fabled massive storm caused several washaways on the formation and nowadays the track drops down into them with a climb back out to level ground. After negotiating some of these we came out to where the track skirts the cliffs overlooking the Wolgan Valley. We were also thankful that the track runs north-east so we were now getting the morning sun after the cold passage through the tunnel and Penrose Gully. Along the formation there are still quite a lot of old railway sleepers that have escaped bushfires and campfires. Ominously though there are places where it is obvious that large slabs of the cliff have fallen down since the track was lifted about 1941. So we didn’t linger too long in those places. The track drops down on a gradual 1 in 25 gradient (steep for a railway but easy for walking, until coming to the boundary of Wollemi National Park (from where a walking track continues to Newnes for another 5 or 6 km). Amazingly, we came across a family group that included a woman holding a small dog! They were headed for the Glowworm Tunnel. The woman explained that they didn’t know about the pet ban until they got here! (Hello, heard of checking on websites??).

Still, what goes down must come back up again! We had descended 350 metres from the camp site to here, and now we had to recover all that! After a water break we the set off on the almost continuous climb back to the cars along the Old Coach Road. This track (strictly speaking another fire trail now) goes up almost continuously until reaching the turn off of the Pagoda Track, which he had taken earlier. It continues up, passing a sturdy iron barrier, the another 1.5km back top the cars. By the time were were back at the cars it was lunch time and we had some light food (no fire was lit). We noticed several other vehicles there now and the entries of 3 groups that had gone to the canyons there, including Andrew Walker’s Crooked Crevice Canyon group. We then set off to Mt Victoria again enduring the awful pot holes of the Glowworm Tunnel road, made worse with the shadows of trees on the roadway making many less visible. I stopped for about 5 minutes at Bugleboori picnic ground to allow Zhong to catch up (and not get too far ahead of him just in case the pot holes caused him problems). I noted the groups there that Andrew Walker had described in his “Crooked Crevice Canyon” trip report. I didn’t think camping was allowed there but several groups were, with all the usual useless paraphernalia and fires going (which I also thought was not allowed in the Newnes State Forest). I turned off to go via Clarence but Zhong’s GPS told him to go via Lithgow, which he did. As a result we got to the next coffee stop at Blaxland Maccas about 15 minutes ahead of him.

Then it was back to Strathfield; I filled up again at Concord to take advantage of the NRMA 5 cents/L discount, and was pleasantly surprised to find that I had only used half a tank (25 litres) on the whole trip! So I dropped off my people at Strathfield Station after a happy weekend of camping.

We had a good weekend with many seeing the extent of the Southern Sky for the first time. It is a pity how city lights have caused the Milky Way to become almost invisible in urban areas. And also a break from the distraction of mobile phones!And no “no shows” by the way (as you would expect on a weekend camping trip).